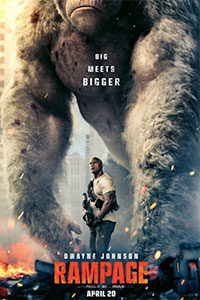 Rampage is based on an 8-bit arcade game from the 1980s in which the player controls one of three oversized monsters, a giant King Kong-esque gorilla, an enormous wolf, and a large Godzilla-like lizard. Players smash buildings, destroy attacking helicopters, and eat human victims for energy. The purpose of the game was to cause as much damage as fast as possible. New Line Cinema’s adaptation features Dwayne Johnson trying to stop these monsters from wreaking havoc on Chicago. Reteaming with Brad Peyton, his director on Journey 2: The Mysterious Island (2012) and San Andreas (2015), the former pro-wrestler, fresh off his record-breaking success with last year’s overhyped Jumanji: Welcome to the Jungle, once again finds his charm put to waste. Neither deliciously campy nor elevating the material, Rampage feels like it checks every box mandated by the studio’s publicity department, while leaving everything onscreen achingly boring, unless you’re an 8-year-old boy currently overdosing on Pixy Stix.

Four credited screenwriters reverse-engineered the game’s setup, factoring in Johnson’s presence (he’s a producer, after all), and the requirement to anthropomorphize one of the monsters into an unlikely hero. The resulting scenario satisfies Hollywood’s current obsession with gargantuan animals or robots (see Pacific Rim, Godzilla from 2014, Kong: Skull Island, or Pacific Rim Uprising). The movie entails an evil corporation bent on developing a genetic editing formula that mutates animals into enraged kaiju. Why would anyone develop such a serum? The money, of course. A cartoonishly villainous brother and sister, Claire and Brett Wyden (Malin Akerman and Jake Lacy, evoking Ivanka Trump and Donald Trump, Jr.), inadvertently unleash their toxin on Earth, leading to three overgrown beasts. A wolf in Southern Wyoming, a crocodile in Everglades National Park, and the primary animal, named George, an albino gorilla fluent in sign language. George is also the best friend of muscle-bound San Diego Wildlife Preserve primatologist Davis Okoye (Johnson).

When George starts to grow uncontrollably and cause trouble, a top-secret government agency arrives to control the situation. Enter Harvey Russell, played by Jeffrey Dean Morgan (ostensibly in Negan mode from AMC’s The Walking Dead, complete with a Southern drawl and shitkicker attitude). Davis tries to stop Russell from taking George away, but inevitably, there’s a scene where Russell looks over a heavily redacted dossier on Davis’ past, citing his special-ops background. As you might expect, Russell allows Davis to tag along, because the best way to fight pumped-up beasts is with a pumped-up ex-military toughguy. They’re joined by Dr. Kate Caldwell (Naomie Harris), the plucky scientist who invented the genetic formula. Kate, a former employee of the Wydens, lost a brother, and the script keeps reminding the viewer of this detail without exploring it as a worthwhile emotional device. At any rate, the heroes must develop an antidote to stop the accelerated growth of these monsters, while Davis desperately wants to protect George from harm.

The writing is distractingly bad, with moments that make no sense or prove downright irrational. At first, the Wydens attempt to kill the mega-wolf in Wyoming using a guy named Burke (Joe Manganiello). When Brett asks his sister who Burke is, Claire explains, “You know that Killers R Us company I hired? He’s the ‘Us.'” It’s a line that’s supposed to sound badass but instead sounds unintentionally stupid. There’s a lot of that in Rampage. Take when the Wydens use a special radio signal to draw all the beasts to their company’s headquarters in downtown Chicago so that they can recover the genetic material for their continued research. This begs the question: Why would you want to draw colossal beasts to your building? Why not lure them to the middle of nowhere? Or at least to someone else’s building? Such thin, often nonsensical motivations remain prevalent throughout and fail to give us any reason to care about what’s happening onscreen. At the very least, the runtime mercifully falls under the two-hour mark, which is shorter than most characteristically overlong summer blockbusters.

By the time the CGI creature mayhem begins, and the Wyden skyscraper topples over, leaving untold numbers in collateral damage, Peyton’s direction calls to mind the disaster fare of Roland Emmerich, with occasional hints of Michael Bay. By comparison, Peyton makes those directors look like masters (next to Rampage, Emmerich’s 2000 version of Godzilla isn’t so awful). The proceedings boast generic, unimpressive visuals and choppy editing, robbing viewers of the lowbrow pleasure often inherent to watching CGI creatures cause billions in property damage. Besides the cast, everything onscreen looks like a digital confection. The humans aren’t much better, though. Johnson and Harris have little chemistry, despite an implied romance in the finale. Worse, George, perhaps the only worthwhile character in Rampage, is used for cheap laughs. A running gag involves the CGI ape flashing the middle finger. And in the last scene, he refers to Davis and Kate with a lewd finger-in-the-hole gesture. Maybe George will throw poo in the sequel.