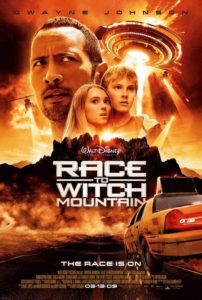 Walt Disney Pictures’ remake of their 1975 hit Escape to Witch Mountain has been retitled Race to Witch Mountain, because according to someone in the studio’s marketing department, escapes are less exciting than races. The original film’s mountain was a site of bizarre and unexplained events believed to be caused by witchcraft, whereas the new version uses it as little more than a McGuffin to fuel the ensuing chase.

In essence a glorified episode of The X-Files for kids, this remake succeeds in returning to the banality of Disney’s cheesy 1970s live-action fare, and even imbues some modern clichés in the process. The mountain here is simply a government installation housing the crashed spaceship of Sara (AnnaSophia Robb) and Seth (Alexander Ludwig), two aliens who look like you and me. They’re on earth to protect their homeworld from some involved threat that means very little to the viewer. Goons led by close-minded government suit Henry Burke (Ciarán Hinds) appropriate the alien ship after the botched landing. We never learn why they crashed, since yet again, this detail has nothing to do with the chase. Director Andy Fickman probably figured why slow down to clarify a point of logic when there’s a pursuit and momentum to maintain?

The alien-children hire beefy cab driver Jack Bruno (Dwayne Johnson) to drive them out to the desert to find some alien doohickey that will save the world. Meanwhile, the Men in Black are after them, and so is an alien bounty hunter who shoots laser beams from his wrist and resembles the monster from Predator. Oh, and gangsters are after Jack for some inexplicable reason too. Tack-on an overproduced musical score and choppy editing, and you have yourself entertainment enough for a 10-year-old. What about the rest of us? We’re out of luck.

There are some chuckle-worthy moments, I suppose, like when Jack brings the children to see astrophysicist Dr. Alex Friedman (Carla Gugino, who does not exude airs of an intellectual, as we learned from Night at the Museum). She’s lecturing at a science fiction convention in Las Vegas. Crowds dressed like storm troopers from Star Wars cheer as the real alien bounty hunter walks by. It’s funny because, you see, he’s an alien, but they think it’s just a costume, except it’s not. Get it?

Garry Marshall (once the director of Pretty Woman and The Princess Diaries) appears briefly as an extra-terrestrial fanatic, the sort that lives in a Winnebago with tin foil on the windows and government secrets at his fingertips. If there’s anyone completely unsuitable to play such a character, it’s Marshall, who looks so out of his element in front of a computer it would shock all if he proved he could use a VCR. Why not get David Duchovny or Gillian Anderson onscreen for five minutes? Or maybe Brent Spiner or Stephen Hawking? At the very least Christopher Walken—he’s from another planet. Instead of cameos that make sense in a movie about UFOs and aliens, the producers opted for Marshall, and also a forced mid-movie music video featuring modern country band BrokeDown Cadillac.

Most upsetting is the presence of he-who-is-formerly-known-as-The-Rock. Johnson has surprising charisma and energy, and however skeptical I am toward wrestlers-turned-actors, he has evident charm. And yet, Johnson seems pigeonholed into hammy roles that cry out for someone of lesser possibility—like from the Ashton Kutcher rank of C-grade celebrity. With Doom and Get Smart and Southland Tales under his belt, Johnson should consider a new agent, certainly a new game plan (which reminds me, he was in The Game Plan too).

Race to Witch Mountain might entertain some adolescents in the audience, those who haven’t seen all the grand sci-fi movies this one steals from, most notably Close Encounters of the Third Kind. It’s the type of movie best reserved for DVD night, when the adults are in one room watching their thing, and the children are stuck with this. Should the situation come up, however, best to pick some other Disney adventure both you and the kids can enjoy together—something truly magical like 20,000 Leagues Under the Sea or Tron. After all, shouldn’t a family film be about entertaining the family, and not just the youngest common denominator?