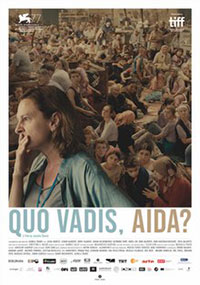 Quo Vadis, Aida?, Jasmila Žbanić’s urgent and harrowing account of the 1995 Srebrenica massacre, reveals how quickly genocide transforms from being unthinkable to a shattering trauma. It’s a film of intense energy that tracks Aida Selmanagic (Jasna Đuričić), a translator for the United Nations, as she races to locate her family and ensure their survival. In one scene, she climbs to a vantage point to look out over a mass of thousands, each of them terrified and displaced. She calls out her eldest son’s name, but the sound is lost in the crowd. The scope of what’s happening becomes horrifyingly clear. And yet, Žbanić’s superb drama relies on an intimate portrait of Aida’s situation instead of a broader canvas showing the events leading up to the breakup of Yugoslavia. A realistic and deeply human treatment of the events, Žbanić’s masterful film never resorts to standard formal solutions for realism, despite her background as a documentary filmmaker. Rather, she applies a cohesive cinematic grammar that forces her audience to grapple with the horrifying reality of what happened as only cinema can. It’s an accomplished work that belongs on a shortlist with great films like Schindler’s List (1993) or Peterloo (2018) about how bureaucracy can be weaponized into a nightmare. But at the heart of Quo Vadis, Aida? is a need to tell a story that others would repress, to promote healing and recognition where little has been issued.

In July 1995, the Bosnian Serb Army, headed by Ratko Mladić, entered the town of Srebrenica, driving its 30,000 Muslim civilians toward the nearby United Nations base. Although the U.N. declared the area a safe zone, the predominantly Dutch group of peacekeepers were woefully ill-equipped to prevent or manage the situation. After taking Srebrenica, Mladic’s soldiers pressured U.N. representatives to load over 8,000 men and boys onto buses, promising to relocate them to a safe town nearby. Instead, Mladic’s units murdered them and put the bodies into mass graves in an act of ethnic cleansing. Many of the remaining women and girls were raped by the Bosnian Serbs, and the victims’ numbers are staggering (a subject covered in Žbanić’s first film from 2006, Grbavica: The Land of My Dreams). But rather than trying to place all of this complex history into context and educate the viewer, Quo Vadis, Aida? creates an entrenched telling through Aida’s eyes. Her role as an official, mother, wife, citizen, and witness gives human subjectivity to a treatment that might’ve been cold and journalistic. 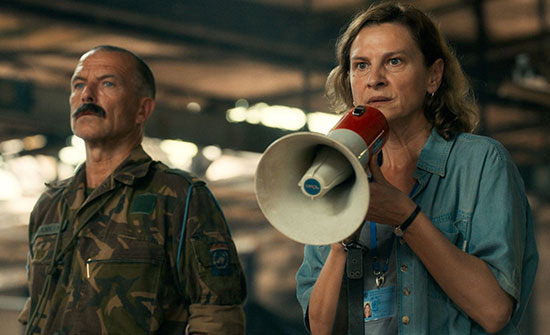 Žbanić’s film was inspired by the accounts of friends and survivors, as well as Hasan Nuhanović’s 2007 book Under the U.N. Flag: The International Community and the Genocide in Srebrenica. It feels like the story of one woman and an entire population at the same time. Đuričić, too, is the sort of performer who feels distinct yet common, powerful yet vulnerable, fierce yet desperate. As Aida, she plays a former schoolteacher who, since the outset of the Bosnian War in 1992, has translated for U.N. personnel (some of whom look like children playing dress-up in camouflage shorts and sleeveless shirts). When the film opens, the U.N.’s Colonel Thom Karremans (Johan Heldenbergh) assures Srebrenica officials that Mladić’s army cannot enter the city; after all, the U.N. has issued an ultimatum. But the promised retaliatory airstrikes never come, and soon enough, the self-obsessed Mladić is filming his victory with all the swaggering charisma of a vile street thug. Once the film settles on the U.N. base where a few thousand displaced residents receive protection inside, the arbitrators’ powerlessness and disorganization become painfully clear—they have no restrooms, no water, and no doctors. Outside the fences, tens of thousands more wait and hope to be reunited with their families. All the while, the way political maneuvers and misjudgments accumulate to a massacre brings to mind the dread of Peterloo.

Aida races between her family and obligations as an interpreter. She must translate for the Serb soldiers and U.N. staff, often relaying messages she doesn’t agree with or knows are untrue. The situation escalates as the Serbs, armed to the teeth, enter the U.N. compound and intimidate the frightened people inside, feigning kindness with gifts of bread and Toblerones. At the same time, Aida pleads with her superiors to add her family members to the U.N.’s list to help them escape. She succeeds only in convincing them to allow her husband, Nihad (Izudin Bajrović), and their two sons Hamdija (Boris Ler) and Sejo (Dino Bajrović) into some protected offices. But when the buses start loading, Karremans and Major Franken (Raymond Thiry) remain so wrapped up in policies and procedures that they cannot see or choose to ignore what’s happening around them. “We are on the list,” Aida insists, trying desperately to get the Dutch functionaries to bend. But she’s arguing with brick walls. The energy Žbanić evokes brings to mind those heartbreaking scenes in Schindler’s List when Oscar Schindler realizes he could have saved more or when he rushes to cool down the Jews idling in train cars on a hot day.

The film has a single break in its propulsive momentum: After successfully helping a woman through labor, Aida rests. She puffs a joint and loses herself in a memory of a party not long ago under vivid purple light and a touch of glam. It seems like another world when her community danced, sang, and held silly pageants. They were once together as human beings, and now the Serbs want to eradicate them. Žbanić, who also wrote the screenplay, shows how these connections linger. Aida encounters a former student who has become an unsympathetic Serb soldier, and former neighbors who become oppressors that offer apologetic expressions saying, “This is how it is now.” Whatever they once shared as Yugoslavians, they’re sharply divided now. But in the aftermath, Žbanić has a few sobering, almost funerary scenes of Aida returning to Srebrenica, where she must reclaim what remains of her former life. In a few short moments, we see how everyone’s shared history is marked by the events before and during the war, whether it’s trying to heal or simply receive some acknowledgment of what happened. 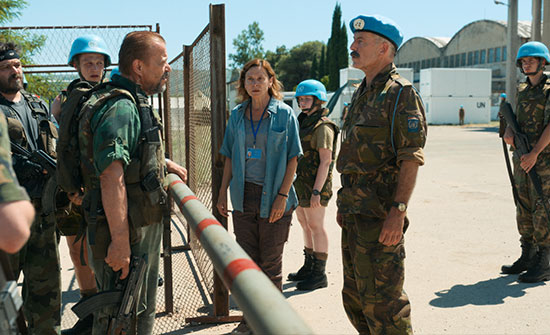 Žbanić’s control of subtle variations in the frantic tone proves incredibly calibrated over the film’s exhaustive 108-minute runtime. Some sequences feel as though they unfold in real-time, which transports the viewer into the mounting horror from Aida’s viewpoint. And yet, here’s a film that someone like Paul Greengrass (Captain Phillips, 2013) would shoot in a cinéma vérité style and earn words like “gritty” and “authentic.” But Žbanić chooses a visual style comparable to Steven Spielberg’s approach on Schindler’s List. She contrasts the grim subject matter with an immersive and thoughtfully composed cinematography by Christine A. Maier. Using a combination of long, solemn takes and smooth Steadicam movements, Žbanić creates a balance of realistic situations in cinematically composed visuals. The result forces the viewer to participate in Aida’s dread instead of being an objective observer of documentary-style footage.

Students of Latin know Quo Vadis? means Where are you going?, but it’s doubtless a reference to a scene from the Acts of Peter in which the apostle flees Rome and happens upon a vision of Jesus on the Appian Way. Peter asks this very question, and Jesus replies that he’s headed to Rome to be crucified again. With that, Peter resolves to face his own crucifixion to be reunited with Jesus in Heaven. In the context of Žbanić’s film, the title suggests some manner of healing through the pain of remembrance, which has been a tricky subject in Serbia, where for many, Mladić is considered a hero—even though he was found guilty in The Hague for war crimes, crimes against humanity, and genocide. Some officials have apologized, but they refuse to use the word “genocide.” In her virtual press tour, Žbanić revealed that she was even denied permission to shoot in Srebrenica and found the local military uncooperative. Much like the Holocaust, deniers in Serbia and Bosnia-Herzegovina claim the Srebrenica massacre never happened. The film proves all the more necessary because so many people don’t want this story told.

Quo Vadis, Aida? ends with a sequence shot in slow-motion at an elementary school performance for parents, both witnesses and perpetrators of the massacre. On stage, children act out a dance with a peek-a-boo gesture, a telling parallel for how some of their parents have chosen to either acknowledge or ignore what happened. Through healing or repression, they have found some kind of normal. Žbanić’s film addresses how a segment of her culture still refuses to come to grips with the massacre, and how many in Bosnia-Herzegovina, not to mention the world at large, have yet to fully confront what happened in Srebrenica. Throughout the film, Žbanić’s outrage over the inhuman bureaucracy at work is palpable without being reduced to outright finger-pointing at the U.N. She sheds light on how inept policies, when combined with blindly following orders, leave room for monsters to manipulate them. A vital film about a heartbreaking page in history, Žbanić has made an unforgettable triumph.