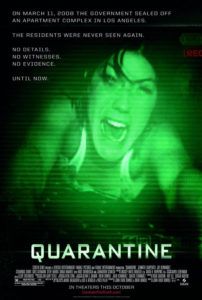 Quarantine is an effective horror movie, one that takes the concept popularized by The Blair Witch Project and realizes it with fitting style and technique. Not to mention a more interesting story. However cliché its “found footage” gimmick might be, director and co-writer John Erick Dowdle injects craftsmanship into his production. To choreograph the film’s long takes, arranging the shots and lighting and timing throughout, making it all seem haphazard and shaky—this takes talent, and it’s what transforms what might otherwise be another schlocky horror flick into such an effective shocker.

A remake of the 2007 Spanish movie entitled [Rec], the film follows a flirtatious nightly news reporter Angela (Jennifer Carpenter) and her cameraman Scott (Steve Harris) as they shadow two fireman, Jake (Jay Hernandez) and George (Johnathon Schaech). We watch only what Scott captures on his camera, trailing behind Angela through the firehouse’s kitchen, locker room, and so forth, as they conduct interviews until her subjects get a call. Off they go to an apartment building, where an elderly woman has reportedly been injured. But no, she’s not merely injured, as we learn when they find her foaming at the mouth, growling, and ready to chomp onto something living.

Outside, we hear a bullhorn voice instructing those inside, including two cops and all the building’s residents, to remain indoors. Not that they have a choice. The doors and windows are sealed, and anyone who tries to leave is greeted by armed SWAT forces ready to fire. Constant helicopter traffic is audible. And when Jake informs everyone that they’re being quarantined for some biological or nuclear threat among them, suddenly they realize their cell phones aren’t working, the cable’s been shut off, and then the lights go out. Uh oh.

Carpenter, best known from the Showtime series Dexter and The Exorcism of Emily Rose, should receive an award of some kind for her panicked wailing once the chaos begins. She successfully unnerved this viewer, as her shrills and shaking fright seemed genuine. “Keep me in the light!” she screams, so efficiently getting under our skin, because isn’t that what we’d be thinking too? The dark is all well and good normally, but throw some crazy diseased psychos into the mix, and suddenly the dark is scariest place to be.

Though I’ll resist revealing any specific details about what exactly causes the quarantine, suffice it to say the result is zombie-like. In fact, it’s a particularly clever way of reintroducing zombies into the mainstream. Zombie master George A. Romero (Dawn of the Dead) never offered an explanation to his undead throughout his five films, however 28 Days Later scribe Alex Garland reinvented the genre with his “rage virus” that spread like wildfire (and generated an equally good sequel).

Movies like this are prone to sudden endings. What can we expect? No movie that employs the “found footage” device is going to end well for its characters, or it would be called “happily turned in by the survivors footage”. Recent examples include Cloverfield and Romero’s underrated Diary of the Dead from earlier this year. Characters argue about their right to film as the situation unfolds, ultimately resolving to shoot everything. It’s doubtful there’s a solution to the problem within this dark apartment building, so expect an abrupt and unsatisfying finale.

While you could certainly carp that this is just another American remake of another foreign horror movie nobody saw, well, that’s completely true. So what? Quarantine, despite its origins, remains scary as hell. Some audiences are reviled by the jerking camera motions—you know who you are, so stay away from this one. And some might fuss that the script is paper-thin. The experience is about the ride, how willing you are to lose yourself in the procession of expertly arranged thrills, and how, at least for the duration, we’re latched on to everything from the chair’s arm to each other in terror.