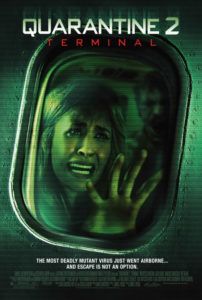 You may not know this, but there’s a new sequel to Quarantine, the “found footage” horror remake from 2008. Although, given the follow-up’s lackluster quality, you may not want to know. Quarantine 2: Terminal has opened on about a dozen screens around the U.S., with a larger push on the video-on-demand market. Distributors at Sony have taken little care promoting or releasing their product, as they’re evidently aware it’s a stinker bound to fail. The studio has saturated internet markets with ads in hopes to generate just enough attention to earn back the movie’s shoestring budget. Mildly positive word-of-mouth might rouse enough business, but some confidence from the distributors would have too. Of course, it doesn’t help that this pseudo-zombie movie set on a plane is a cliché wrapped in a tired formula, written by U.S. Marshals and Ghost Ship scribe John Pogue, who also makes his directorial debut here.

For those unfamiliar with the movie’s background, let’s recap: It all started with Paco Plaza and Jaume Balaguero’s Spanish-language hit [Rec], which debuted in 2007 and earned plenty of well-deserved praise on the festival circuit. In 2008, Sony produced the entertaining remake,  Quarantine, which featured strong production values, slick direction, and some impressive actors (particularly Dexter’s Jennifer Carpenter); but aside from the “motivation” behind the scenario (changed from a disease form of demonic possession to super-rabies), it was a virtual carbon copy. In 2009, Paco Plaza and Jaume Balaguero returned with [Rec] 2, an off-the-wall continuation of their original, featuring more action and an outrageous religious twist. Now, instead of simply remaking [Rec] 2 (whose religious themes born in its predecessor were not carried over into Quarantine), Sony has tried their own thing and ended up with a product they would have dumped altogether if not for a contractual responsibility.

The first thing viewers of Quarantine 2: Terminal will notice is how this is not a “found footage” movie, unlike its various forebearers. Pogue’s approach is clean and steady, and though his style never contains a moment of artistic flourish, the viewer always knows what’s going on—which is more than can be said about the other movies in this series. He does utilize a night vision goggle effect in the finale, mirroring the endings of both [Rec] and Quarantine, but thankfully the effect isn’t followed by one of those abrupt conclusions required by the “found footage” subgenre. Pogue’s script is just as plain and straightforward as his direction, however; he employs a laundry list of obvious horror movie elements for which the word “predictable” doesn’t even begin to describe.

Boarding a small, near-empty passenger plane, two flight attendants, Jenny (Mercedes Masohn) and Paula (Bre Blair), contend with a handful of passengers (also known as victims). Pogue establishes that one or two passengers have the sniffles (might they be carrying a deadly virus?), while another too-good-to-be-true kindergarten teacher (Josh Cooke) arrives on board with a crate of “hamsters”. Of course, someone receives a bite from a “hamster”, they become a super-rabies victim, and chaos spreads about the plane. When the plane is forced to land, a panicking Jenny struggles to gain control of her passengers, while the empty terminal where they’ve taken shelter is surrounded and placed on lockdown by authorities aware of the outbreak. Aside from a subplot where Jenny announces her need to overcome her dependence on her never-onscreen father, a pilot who tells her to “take the stick” of her life, the characters become quick meals for spidery, fast-moving, growling super-rabies victims, and never much more.

Nevermind the absurdity behind Pogue’s decision to make his protagonist a stereotypical flight attendant (if you’re asking why that’s absurd, you’re probably a flight attendant). And just overlook the silly homonym subtitle Terminal, meaning both “fatal” and the setting (aren’t you clever, Mr. Pogue). Zombie genre fans who detach their brain for 86 minutes might find an entertaining movie here, certainly better than the last George A. Romero flick, Survival of the Dead. Still, Pogue should feel lucky his picture earned even those few moviehouse engagements, because his production has a definite direct-to-video quality about it. Without question, it’s the worst from this bastardized franchise of remakes and sequels, but still worth a casual viewing for horror fans looking for a mindless diversion. And for a late night home viewing, that’s just fine. Just don’t spend big screen prices and expect to feel good about it afterwards.