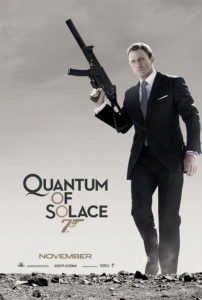 Ian Fleming’s James Bond franchise has a notorious hit or miss reputation on film, and Quantum of Solace rests somewhere in the middle. Adequate for a few cheap thrills, the result should hide under the looming shadow of its most recent predecessor, which outdoes every other entry in the series and makes promises this sequel couldn’t keep. Instead, the 007 of yesteryear returns to his tired clichés, offering little compensation for those of us who’ve had enough of his promiscuity and remorseless violence.

Granted, Bond’s proclivity to punctuate stealthy reconnaissance missions by throwing someone off a roof, or more frequently, causing something to explode, has meaning. Perhaps you recall his lover, Vesper, from Casino Royale, whose death inspires Bond’s tirade of revenge-fuelled violence in this film. The double-oh is once again played by Daniel Craig, an actor with a more appropriate presence than evident versatility, a feature that lends his portrayal needed gravitas. Bond hunts down those responsible for Vesper’s demise, and he’s driven by emotions we must construe from Craig’s intense glare.

His search leads him to Dominic Greene (Mathieu Amalric, from The Diving Bell and the Butterfly), one of those seedy supervillain types, this one without any funky scars or monocle to denote his super-villainy, thus he’s forgettable. Greene, frontman for an environmental protection firm, has brokered an oil deal with a Bolivian general planning a coup on his government. Bond and no one else believes Greene to be part of an ultra-secret evil organization that blankets the globe, so as our hero’s body count rises attempting to expose them, M (the great Judi Dench) questions which side he’s on. Along the way, he meets Camille, played by Olga Kurylenko (best known as the hooker-with-a-heart-of-gold from Hitman and Max Payne), who seeks her own revenge from the same folks Bond does.

Every action movie trope in the book is ripped from the page and pasted to this paper-thin yarn, including chase scenes involving every vehicle known to man. Opening with a car chase, we’re then subject to some fancy motorcycle jumps, battles on boats, and even an airplane dogfight sequence. Apparently, Bond has transformed into a singular action hero instead of the spy who occasionally engages in fisticuffs. Indeed, this Bond does very little spying and instead adheres to the Jason Bourne School of Badassery, where said spy kills everyone in sight without feeling. Unfortunately, such one-note motivation leaves meager room for Bond’s otherwise signature suaveness.

However lauded his dramatic efforts on Monster’s Ball and The Kite Runner, director Marc Forster struggles to construct an intelligible action scene, employing the shaky camera technique. Though, he can’t absorb the entire blame; much of the fault resides in the choppy editing, handled in part by Richard Pearson, whose talents for incomprehensible thrills also nearly ruined The Bourne Supremacy. Bond runs about shooting at bad guys whose faces we never see because cuts follow the customary action movie norm of .001 milliseconds per shot. The aforementioned vehicular chases, communicated via sloppy montage, end with resolutions we don’t understand.

With the greatness of Casino Royale still fresh in my mind, questions arise: What do audiences want from James Bond movies nowadays? Are they satisfied with rousing entertainment? Because this film has plenty of that, including some painful-looking hand-to-hand combat and a neat explosion or two. Or do they want traditionalized James Bond formula, complete with colorful villains and willing sex objects?

Just when Casino Royale re-envisioned the formula with a modern touch of low-key humanism, sans outdated womanizing and comic-book gadgetry, it spoils its progress by this underwhelming return to old conventions (for example, Bond meaninglessly beds a redhead named Strawberry Fields, played by Gemma Arterton, wasted). Then again, other typical 007 movie traits are strangely overlooked—like no bloody gunshot into the iris to introduce the titles, which feature the bland song “Another Way to Die” by Jack White and Alicia Keys. Next to previous Bond entries, the film seems more aligned with the Dalton/Brosnan eras, which are ample but not rightly satisfying.

From the outset, Quantum of Solace races ahead without considering its audience, forcing bravado action sequences we’re unable to follow. The proceedings rarely fall back on the script, itself of modest substance. No matter how enjoyable this action fodder may be, unfortunate and inevitable comparisons will be made to Casino Royale, and so disappointment comes naturally with the bar set so unattainably high. Some will apologize for the apparent faults and lose themselves in violent escapism; others will overlook this entry and hope Daniel Craig returns with a better director next time. Count me in the latter category.