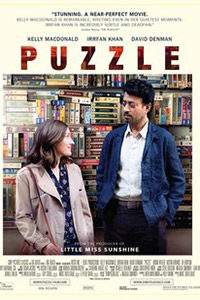 Read any reviews of Puzzle, and the critic will likely write that watching a film about putting together puzzles doesn’t immediately bring to mind an innately cinematic experience. But that’s missing the point of director Marc Turtletaub’s quiet drama, a thoughtful and intimate character study of a repressed woman who, at long last, learns to explore her place in the world. Following the trajectory of the 2009 Argentine film Rompeczbezas (meaning puzzle) on which it was based, puzzles merely provide the catalyst to something more fulfilling in the realm of self-actualization. At the center is Kelly Macdonald, the Scottish performer who’s impressed since her debut in Trainspotting (1996), then again in Gosford Park (2002), and also her more recent role on HBO’s Boardwalk Empire, along with a dozen other roles. She commands in a rare leading capacity here, giving an unassuming and occasionally mannerist performance that elevates the sometimes obvious drama of her character’s world.

A devoted Catholic and homemaker in Bridgeport, Connecticut, Agnes (Macdonald) is removed from the stifling suburban life that has been her existence for decades, lost in her dispirited daily routine. She looks after her blue-collar husband, Louie (David Denman), and their two grown sons, the unduly entitled Gabe (Austin Abrams) and the disenchanted Ziggy (Bubba Weiler). In the opening scenes, Agnes prepares their home for a birthday party, hanging decorations, icing the cake, and setting out food for guests. Except that after the guests have arrived, and Louie is properly soused, it comes time to blow out the candles. Suddenly, as the guests begin to sing, it’s apparent that she spent the day prepping her own party. Although this unsubtle moment sums up her existence, the film continues to show Louie’s selfish relationship with his wife, and Agnes’ continued unfulfillment. Turtletaub, making his directorial debut after more than a decade of producing for mini-majors, treats such scenes, which could have been outlandish, with subtlety and understatement. Only when Agnes opens a birthday present, a 1,000-piece puzzle, does she realize her uncanny talent for pattern recognition and assembling puzzles at an incredible speed.

As it turns out, Agnes focuses on the mundane tasks of her life because her mind continually races. Her family often perceives her as being lost in her own head, but puzzles allow her to focus and achieve clarity. While searching for more puzzles to assemble, she finds herself breaking her tedious daily routine for a rare trip to New York, where she sees an ad for a puzzle champion looking for a competitive partner. Secretly joining the eccentric inventor Robert (Irrfan Khan) in his home to prepare for an upcoming doubles tournament, Agnes becomes all-too-aware of her dissatisfying existence—how Louie and Gabe talk down to her and take advantage of her willingness to serve as the family’s selfless caretaker. But now she’s changing. She uncharacteristically lies to conceal where she spends her days, she forgets her cooking and shopping routines, and she immerses herself in her only true joy: puzzles. Meantime, this introverted, genius-minded housewife is also falling for her new partner. And why not? After years of dynamic Hindi-language performances in Indian cinema, Khan has recently made a small career in Western films, often playing the most eccentric and charismatic person onscreen.

Fortunately, the adaptation by Oren Moverman and Polly Mann treats its characters as people, as opposed to devices within a screenplay formula. Louie, for instance, is more than just a typically inattentive mechanic husband, clueless about his wife’s inner life. Although he expects his dinner on the table at the same time every day, he stops short of being an abusive or unreasonable monster. He, too, is capable of change. He’s actually quite sympathetic, regardless of his dismissal of all things outside of his routine or anything he’s unfamiliar with. Likewise, no decision Agnes must make—for instance, whether she leaves Louie for Robert—comes easily. Such complexity gives the actors a chance to deliver multifaceted performances, full of understated moments behind the hushed, traditional exterior maintained by Agnes’ family. Even Agnes’ sons have substance to them. Both remain aware that their mother hasn’t truly lived, and while Gabe wants to escape to avoid becoming like her, Ziggy might fall in the same trap if he doesn’t embrace culinary school, his version of puzzle-making.

Although Puzzle is R-rated, the handful of F-words does not justify the rating. Turtletaub has made an accessible, adult drama that proves affecting through a series of quiet and involving scenes. He and cinematographer Christopher Norr capture Agnes’ world in soft light, simple earth tones, and observant photography, never calling attention to the form, and the score by Dustin O’Halloran doesn’t telegraph how the audience should feel. The low-key tone underscores the story and title’s rather on-the-nose metaphor about life being a puzzle, and how everyone must use their own pieces to assemble a unique picture. Never dwelling on that idea with unworthy schmaltz, the film avoids what the same story could have been (a dreadful TV-movie) in the hands of a less skilled director or writers. Above all, Macdonald’s unflashy performance carefully modulates between a meek housewife and a woman gradually realizing that the life she leads—including her family, her church, and her entire limited worldview—must be urgently changed. This performance, arguably the best in Macdonald’s career, is masterful and elevates the modest pleasures of the film.