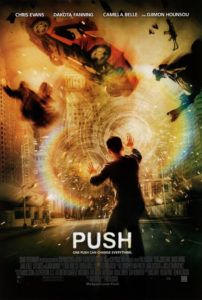 Push would make a fine comic book, if only the events therein were more engrossing. As a movie, it has all the trappings of your typical superhero yarn, complete with a select few paranormal-powered individuals that decided to forgo rubbery costumes. Some bad people with powers want to harm the good people with powers. The characters talk for a while, a musical interlude passes some time, and then an action sequence breaks the calm. Surviving on this rhythm, the result is mildly entertaining but occasionally tiresome.

You might wonder how many superhero movies Hollywood plans to dish out. The number keeps going up and up, and while I’m all for iconic comic book characters coming to life on the big screen, blatantly rehashing them in this supposedly more realistic and uninspired actioner serves no purpose other than to save on paying royalties to the comic book company. The script, written by Bat Thumb and Frankenthumb director David Bourla (yes, I just referenced Bat Thumb and Frankenthumb), imagines a world where those endowed with special abilities don’t even consider donning a cape and cowl—and in a film where objects are moved by telekinesis and psychics are readily abundant, that none of them consider becoming their city’s defender is the most unrealistic part.

Marvel is likely shaking their finger at Bourla, since the film’s storyline was pilfered from the X-Men franchise. Both concern pseudo-mutants running from an unjust government agency. They contain characters that can read minds, move objects by thought, heal by touch, and shatter glass with a scream. But, if Marvel didn’t sue TV’s Heroes, it’s doubtful they’ll take action against Push.

As the story goes, a corrupt outfit called Division seeks to enhance the abilities of these nada-superheroes to create a super-soldier army for some nefarious purpose that’s not explained. Nick (Chris Evans) is a Mover, a self-explanatory title, quietly hiding out in Hong Kong. Suddenly Nick gets a knock on his door from the precognitive Watcher named Cassie (Dakota Fanning), who says that she’s seen the future, and it shows her that together they will bring down Division. (Note: If she never saw an image of them overthrowing Division, she would never have known to seek him out, in which case she never would have knocked on his door and the movie wouldn’t have happened. So she’s really less a “watcher” of the future, and more a creator of it.)

Anyway, the key to their struggle is Kira (Camilla Belle), a Pusher who can place ideas into your head, such as the movie’s overused “put your gun in your mouth and pull the trigger.” Kira was the only surviving test subject of Division’s experiments to enhance the powers of the already super-powered. She escapes, meets up with Nick and Cassie, and the moderately diverting adventures begin when they fight back against Division stooge Henry Carver (Djimon Hounsou), himself a powerful Pusher.

Shot with ostentatious cinematography by Peter Sova (The Strangers), the film offers an appealing look when showcasing the busy streets of Hong Kong, but over-stylizes the production by using fisheye lenses and intentional grain on the film stock. Action scenes are given commendable energy, though there’s not much order to the presentation. Furthermore, director Paul McGuigan (Lucky Number Slevin) doesn’t embrace his location as he should. The aforesaid musical interludes are presented with dorky American alt-rock, versus what should’ve been welcomed entries from Hong Kong’s fervent pop rock culture. Lackluster performances, save for a chuckle-worthy drunken scene by Fanning, keep the audience emotionally distant. Maintained by the short but bursting action sequences, our attention spans are teased with potential for an end battle of epic proportions that ultimately flops and drizzles away. However admirable the idea of bringing comic book stories down to earth may be, movies like Push and last year’s Hancock prove that superheroes are best left to the professionals.