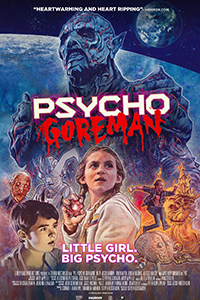 PG: Psycho Goreman opens with gleefully serious red titles of doom-filled exposition. “Many moons ago, on the distant planet of Gigax,” reads an ominous voice, “a nameless evil reigned supreme,” and so on. It goes on like that for four paragraphs before giving way to one of the strangest, funniest movies of 2021. Despite the title, and its gallery of nasty creatures and blood-spurting violence, the movie offers more comedy than horror. It’s a winking, ironic take on dozens of cult classics, but refreshingly, it isn’t a reference machine that functions like a game of Name That Homage. All too often, today’s horror filmmakers enter into their projects with a mind toward allusion, and the result ends up feeling overly dependent on established material. This reviewer can take only so many winks at John Carpenter’s films, regardless of how much I cherish his work. Instead, Canadian writer-director Steven Kostanski captures the flavor of schlocky, C-grade horror movies in a cult style that isn’t designed to scare; it aims at goofy humor first, using morbidity and batshit crazy gore as punchlines. Of course, this sort of thing isn’t for everyone. Those who can’t imagine finding decapitations and melting faces funny should stay away.

Kostanski’s movie tosses elements from a dozen or more cult favorites into a stewpot and simmers; those tasting it will recognize familiar ingredients but appreciate his recipe. The material is remindful of Hellraiser (1987) and its rather apocalyptic pleasure-from-pain creatures who delight in finding new ways to inflict physical suffering. Now imagine the rambunctious kids from The Monster Squad (1987) befriended Pinhead, the monster from Hellraiser, and held power over him, treating him like a slave or unloved pet. Then, say the children stood by and cheered as their newfound friend performed melty gross-out violence, like the stuff in The Toxic Avenger (1984) and Street Trash (1987). Now add on an intergalactic battle, which looks less like Star Wars (1977) and more like Roger Corman’s Battle Beyond the Stars (1980)—and everyone’s in costumes that look like rejected concepts from 1990’s Teenage Mutant Ninja Turtles movie. If you can imagine all that, then you have some idea of Kostanski’s approach to Psycho Goreman.

The story is “a tale bathed in the blood of a million dead memories,” to quote the titular alien demon, played in costume by Matthew Ninaber and voiced by Steven Vlahos. It involves two young children who unearth an evil force and assume control over it. Siblings Mimi (Nita-Josee Hanna, excellent) and her older brother Luke (Owen Myre) wrap up a round of Crazyball, a game of their own design whose rules (“Five-point butt bonus!”) remain indecipherable. Victorious, Mimi makes her submissive brother dig his own grave, as one does at the end of Crazyball. Doing so, he uncovers the self-appointed “Arch-Duke of Nightmares,” an intimidating purple-skinned, bonily-framed, pink-veined alien who’s known throughout the galaxy for his brutal, world-slaying ways. Alas, these “brainless meat children” hold his powerful gemstone in their possession, meaning they can control his behavior, and he must obey. After giving him the name “Psycho Goreman” (and the catchier “PG” for short), Mimi and Luke—but mostly the sociopathic and bullying little sister—embrace having a kill-crazy warrior on their side. On the periphery, the children’s exhausted mother, Susan (Alexis Kara Hancey), nags their useless father Greg (Adam Brooks) over his laziness and ineptitude. With PG in the mix, the family takes on the sitcom dynamic of Alf. 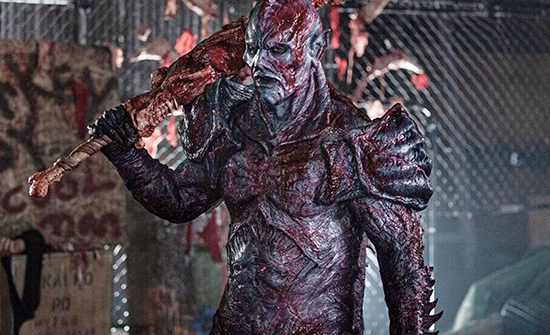 More than her new friend, Mimi is an absolute nightmare. Sure, PG can smell fear, tear off limbs, and condemn someone to an eternity of pain—all while monologuing to electric guitar riffs about the joys of bloody carnage. But the hyper, preadolescent Mimi is worse, somehow. Consider how she makes passes at Luke’s best friend, Alisdair (Scout Flint), telling him to “give us a spin, hunky boy.” Alisdair’s stand-offishness finally leads to Mimi ordering PG to deal with him. PG transforms the boy into a massive brain with eyes and tentacles. They’re two peas in a pod, Mimi and PG, right down to their affinity for destruction and, as we learn, hunky boys. But her control over PG is tested when his old cohorts return to exact revenge. Meanwhile, on a far-away planet, a committee of elitist aliens speaks of the “templar code” facing off against the “ultimate evil,” leading to an epic showdown. The inner-family conflicts come to a head at the same time—and the climax features brother fighting sister, husband fighting wife, and PG fighting the angelic soldier Pandora (Anna Tierney’s voice; Kristen MacCulloch in the suit).

At one point early in the movie, just before bedtime, Luke asks his father if there are really monsters out there. Greg matter-of-factly responds, “In a lot of ways, humans are the real monsters. So yes.” He’s referring to Mimi, who, during lunch, tells her brother, “I think you’ve had enough, fatso,” when she wants the rest of his fries. Behind those pigtails, Mimi wants to see the world burn. She even thumbs her nose at God when she breaks a crucifix and announces, “There’s a new God in town, buddy, and he’s coming for ‘ya!” Kostanski’s script proves so riotous at times because he makes Mimi into such a cartoonish monster. Take the scene where Luke digs up PG. He asks his sister, “Is this where we buried grandma?” It’s a remark that raises more questions: Why did they bury their grandma? And why did they bury grandma in their backyard and not in a cemetery? Was she dead when they buried her? Do their parents know grandma was buried in the backyard, or is this a secret between siblings? Pick any scene, and you’ll find it contains similarly macabre zaniness underneath. But Kostanski recognizes that moments like this are no more strange than some of the movies we grew up watching.

And that’s partly the point of the title’s “PG,” which Kostanski stylizes in the same font as an MPA rating (formerly MPAA). Plenty of inappropriate (by today’s more conservative standards) things happened in PG-rated movies of the 1980s. Kostanski riffs on this by making a movie devoid of sex or swear words (his characters use “frig” with all the versatility of “fuck”), though he douses the screen with copious amounts of gore. A few months before writing this review, I revisited Don Coscarelli’s The Beastmaster, a fantasy movie from 1982 rated PG. I was surprised to find scenes of full-frontal female nudity, coupled with some casually portrayed sexual misconduct and countless gristly deaths. At one point, a batlike creature enshrouds a peasant in its wings, vomits on him, and opens its wings to reveal the mostly digested remains. As a kid, my parents no doubt rented the VHS for me, seeing the PG rating. Today, it would receive an R. Somehow, it’s appropriate that Psycho Goreman received no MPA rating at all. 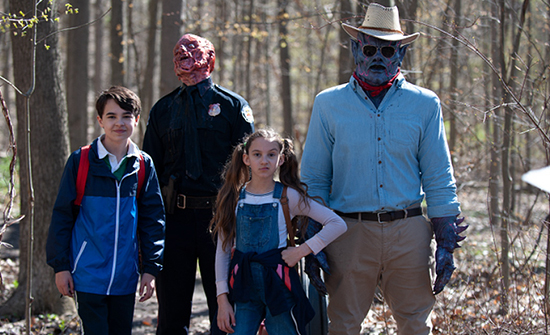 This is not to suggest my moral outrage over the misrated titles of yesteryear, nor do I mean to suggest that Psycho Goreman deserves a particular rating (though, if I had to choose, PG-13 seems most appropriate, given that the violence on display is played for gross-out laughs, while every week similar violence accompanies far heavier thematic material on basic cable’s The Walking Dead). Rather, my point is only to identify Kostanski’s commentary on the edge that once accompanied so-called family fare. Hollywood, taking a cue from Steven Spielberg’s dark streak, used to be willing to scare children. Spielberg produced Poltergeist, another 1982 release rated PG, which features a man tearing the flesh off his face in the mirror. The Spielberg productions of Gremlins (1984) and The Goonies (1985) followed, each with frightening scenes. From this wellspring, we got stylistic nods with the R-rated Return of the Living Dead Part II (1988), which follows a rambunctious, downright Spielbergian child who makes wisecracks during the zombie apocalypse. By the end of Psycho Goreman, PG gives a faux-serious speech to his earthling friends: “Thanks to your family I know the true power comes from within—the power of love.” It’s a lesson that brings to mind the unlikely family-friendly relationship between a child and killing machine found in Terminator 2: Judgment Day (1991), only exaggerated for effect.

Kostanski’s blend of kids and over-the-top violence might not sound like great fun to some, but the distinct look of the other-worldly characters makes them seem like cheesy knock-offs, and therefore more palatable in comic terms. Refreshingly, the inspired practical make-up effects team employs no end of rubber costumes and bucket loads of fake blood. Horror fans will watch admiringly at the ambitiously outrageous and tangible onscreen deaths. Today’s horror movies tend to use digital alternatives to the red stuff to reduce clean-up time between takes. Kostanski’s production remains defiantly committed to physical effects, aside from the tongue-in-cheek use of intentionally generic-looking CGI to portray vast alien worlds and the rare stop-motion creature. The throwback quality includes stagy costumes and post-synced audio for PG and the other aliens, making them feel like they’re from the same universe as Power Rangers. By the time there’s a mid-movie rock video montage with Mimi bellowing “Frig off!” and PG on the drums, Psycho Goreman can’t be mistaken for anything but a comedy.

Many recent movies have tried to replicate the best of cult horror through copious references, but most of them end up feeling like bad imitations that only make you want to revisit the real thing. Psycho Goreman doesn’t lose itself in pointed nostalgia. With an ironic attitude and production design, it plays like something made in 1991 that debuted on the shelves of Blockbuster. It’s an absurdist oddity: a ghastly movie with costumed monsters and excessive slapstick gore, yet it resists the abrasive edge of a Troma production and feels abnormally silly. Although it might be tempting to lump it in the category of horror-comedy, none of the monsters or aliens or many scenes of garish violence offer genuine scares. Rather, every laugh, oddball aside, melted face, and awkward moment feels intentional, resulting in a wildly effective and comically timed farce. By the end credits rap, whose lyrics explain the entire plot, the right kind of viewer will celebrate Psycho Goreman as an endlessly quotable comedy splatterfest.