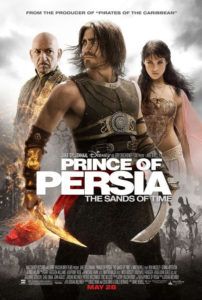 Mega-producer Jerry Bruckheimer and Walt Disney Corporation, whose last joint venture was the mega-successful Pirates of the Caribbean trilogy, have come together once more to adapt a mega-popular Ubisoft video game into a summer blockbuster, the mega-dud Prince of Persia: The Sands of Time. Gamers hoping the discreditable based-on-a-videogame movie would earn some respect from this tentpole release have a disappointment coming. Lazy writing and inane action sequences try but fail to capture the desired swashbuckling spirit, while the familiar character types and storyline copy exhausted clichés. The result, though production values are high and the actors are noteworthy, doesn’t deserve to be taken any more seriously than fodder like Doom or Mortal Kombat or Resident Evil, despite the lofty pricetag.

As a child, the Persian street rat Dastan (Jake Gyllenhaal) was adopted by the king of the Persian Empire, and so he stands alongside his princely brothers as an equal. When the King’s sons invade the peaceful fortress of Alamut on the recommendation of their sinister uncle, Nizam (Sir Ben Kingsley), Dastan finds a mystical dagger containing The Sands of Time. Its guardian, Princess Tamina (Gemma Arterton), shows more concern for the dagger than her conquered city; so when Dastan is framed for the death of the king, Tamina helps Dastan escape to protect the sacred weapon. Through an endless assault of dreadful “meet cute” bickering, the two seek to clear Dastan’s name and protect the dagger from falling into the wrong hands. Along the way, they encounter colorful characters in sweeping locales, most of them rendered with lousy CGI and sets devoid of crucial detail.

Three screenwriters (Boaz Yakin, Doug Miro, and Carlo Bernard) conceived a scenario rooted in the game’s lore, establishing a series of increasingly thorny situations for the acrobatic hero to overcome, not unlike levels in a video game. Level One: Raid on the Alamut castle. Level Two: Escape from the castle. Level Three: Survive Sheik Amar’s Valley of the Slaves. And so forth, until Level Thirteen: Defeat the crooked Nizam and his horde of Hassassins. Players—excuse me—viewers watch Dastan use the dagger, a game mechanic-turned-MacGuffin that turns back time when hallowed sand contained inside the handle is released. Whoever possesses the dagger has the power to manipulate history as they wish. Wispy computer effects show scenes reversing through a flurry of sand, and our characters backtracking to better react to a sticky situation.

Audiences might find themselves perplexed by the mix-n-mash of actors, characters, and their races on display. Director Mike Newell (Harry Potter and the Goblet of Fire, Four Weddings and a Funeral) follows the long-established tradition in movies of presenting non-Westernized nationalities with British accents. The miscast Gyllenhaal, an American, gives Dastan a British accent, playing the only Persian in the movie with blue eyes. Too good for the material, Kingsley, a knighted Englishman of Indian background, plays another Persian with a British accent. They tanned former Bond girl Arterton, dyed her hair dark brown, but left her posh British accent to play the princess of Alamut. And the racially ambiguous Alfred Molina takes the role of a Middle Eastern scoundrel with yet another British accent. But British accents are standard for classical tales of ancient history; cinema determines everyone from Egyptians to Vikings spoke this way, because authentic accents are harder to teach and more difficult to decipher for mainstream audiences.

Also difficult to decipher: unintelligible action scenes, overedited by the credited trio of editors. Gyllenhaal poses as a third-string Errol Flynn, leaping along the rooftops, waving swords, and swinging from ropes. His movements are chopped up into such abrupt cuts that following one movement to the next proves impossible. Newell slows down some of the more impressive bounds Matrix-style, then speeds up the stock again à la 300. It becomes painfully evident that Newell is not an action director, that he’s reaching with desperation to find some visual signature to involve the audience. But much to our dismay, he falls back on all-too-common tricks that further the movie’s banality.

Case in point, every character correlates to one in Stephen Sommers’ badly dated 1999 yarn The Mummy. Consider Gyllenhaal the exceedingly more leapy version of Brendan Fraser’s here-we-go-again hero. He’s teamed with a witty but beautiful woman, Arterton, standing in for Rachel Weisz, who at first thinks him a brute but eventually warms up for a kiss in the last scenes. Instead of a bald, power-hungry mummy bent on ruling the world, Kingsley is a bald, power-hungry brother of the king bent on ruling the world. Both villains have mystical goons; the Mummy had mummy minions, whereas Nizam has dreaded Hassansins. There’s even a treasure-obsessed, self-serving comic relief rogue played by Molina, filling the shoes of Kevin J. O’Connor’s squeaky-voiced Beni. For creepy crawlies, the filmmakers replace deadly scarabs with deadly snakes. Then whirl some sand about, insert some faux-authentic Eastern music, and you have yourself a transparent simulacrum of a proven blockbuster.

Indeed, you’ve seen this movie before, but not just when it was called The Mummy. You’ll also find elements of Aladdin in the rooftop chase scenes (which could be set to the popping Disney song “One Jump Ahead”). Harry Gregson-Williams’ music derives several notes from Maurice Jarre’s iconic Lawrence of Arabia score. And clearly there’s influence from various Indiana Jones titles (only in almost all aspects of the plot structure). It’s all in an attempt by Disney to establish Prince of Persia as their next swashbuckling Pirates of the Caribbean-like franchise, complete with an inordinately long title, picturesque vistas, and expensive computer-animated effects.

Regardless of these criticisms, Prince of Persia: The Sands of Time is a crowd-pleaser, your standard Hollywood blockbuster lacking in brains what it supplies in noise and movement. The audience in the advance screening was oohing and aahing at all the intended times. They gasped at the cartoonish CGI snakes, laughed at the corny banter, and their hearts audibly swelled when the hero and the damsel finally kissed. But this is a lazy, derivative production for viewers wanting only to shut their brains off for two hours of loud, expensive entertainment. When so many summer blockbusters try desperately to achieve a balance between escapism and quality filmmaking (see Iron Man, The Dark Knight, Robin Hood), this movie’s lack of effort to be anything but standardized is insulting.