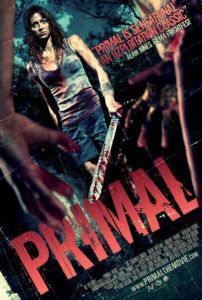 IFC’s newly established Midnight division imports international genre cinema of the horror, science-fiction, and thriller realm. The films chosen by this arm won’t likely make it into theaters, and if they do, the release’s scale will be minuscule. Home viewing is the primary market of choice for Midnight movies, leaving interested viewers to rent the available titles on their cable box for a nominal fee. Their latest selection, Primal, comes by way of Australian director Josh Reed. It has “home viewing” written all over it, as enduring this movie in the theater would no doubt cause rampant walk-outs. At least at home, all one needs to do is shut off the television.

The only character worth mentioning by name is Anja (Zoe Tuckwell-Smith). You know she’s the protagonist because she’s the moody one with a tragic past. She confesses early on that she once survived being locked in a basement for a week by some lunatic, and now she’s stricken by claustrophobia. You can bet Anja has to work through her fear of enclosed spaces in the final act of the movie by entering into the dreaded, undulating cave, which has desires to impregnate her. Yes, you read that correctly. The cave wants to impregnate Anja. Nevermind why, because the movie doesn’t bother to explain in any way that makes sense. Her conflict, and the plot’s entire structure, closely follows that of Neil Marshall’s 2002 cave-themed shocker The Descent.

Filled with start-and-stop manipulation of the film speed à la 300, Reed’s direction is shaky and very visibly low-budget, though seeking mainstream approval with its music video stylization. The movie’s monster effects look silly, namely the sharp-toothed dentures used to create the “primal” mutants. As the actors growl and hiss, they do so through their clumsy teeth and it sounds hollow, like a ten-year-old trying to sound scary with his first pair of Halloween vampire teeth. The few computer-generated effects, used above all to create the cave’s leg-spreading tentacles, look cartoonish and laughable. But those accustomed to the low-budget Australian horror scene will have seen worse (see the Spierig brothers’ zombie fish in Undead).

Reed’s movie serves up a piece of belated Ozploitation (low-budget Australian schlock from the 1970s) to audiences hungry for throwaway entertainment. Watch it with friends for 80-minutes of contemptuous mocking, but don’t expect an engaging story, genuine scares, or anything that might involve you. Viewers will have to make their own entertainment here by pointing out what a hackneyed, predictable movie Reed has made—and doing so loudly, while the movie is playing, so the dialogue and seemingly constant, grating monster screams are muffled. In those terms, Primal has limitless entertainment potential. Under any other circumstances, shut off your television before it’s too late.