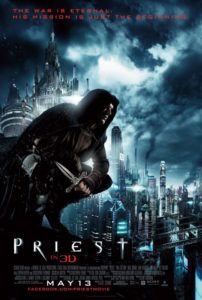 Channeling a dozen or more science-fiction, horror, and action movies, Priest feels all-too-familiar, in a way only a post-apocalyptic vampire Western could. Based on the graphic novel by Hyung Min-woo, the adaptation by director Scott Stewart and screenwriter Cory Goodman plays with far more cohesion than one might expect. Although the end result is nevertheless predictable and, after almost ninety long minutes of preachy religious content mixed with gory violence, the outcome proves tiresome. Although the movie becomes progressively more derivative as it advances, apologist genre fans might have fun, but even with a PG-13 rating the film won’t gather summer blockbuster crowds.

Set in an alternate world part Steampunk, part Mad Max wasteland, the movie features a human race huddled into cramped walled cities reminiscent of those in Blade Runner, except less arresting. Such cities are the last haven for humans from their ongoing war with a race of animalistic vampires, who themselves form large walled nests reminiscent of freestanding termite hives. The vamps were all supposedly wiped out, thanks to skilled killers known as “priests”—hunters trained by the all-ruling Catholic Church. But people stay in the cities out of fear, while the few remaining priests, discharged from their duties, live pointless lives on the margins of society. Of course, the vamps return, demanding a hero (known only as Priest, played by Paul Bettany) to stand up against the in-denial fascist establishment and kick some bloodsucker butt.

The plot delivers a mashup of The Searchers and John Carpenter’s Vampires, following Bettany’s low-energy Man With No Name riff on a hunt to find the gang of vamps who kidnapped his niece (Lily Collins). The bloodsuckers are led by a former colleague of Bettany’s character, a nameless villain played by Karl Urban, who has since been turned into the first human-vampire—complete with the added strength and agility, but without the susceptibility to sunlight. Urban’s standard baddie travels westward by train, gathering the few vamp-things scattered on the desolate terrain, and heads toward the city to reignite the centuries-old war between human and vampire. Priest is joined by a former partner (Maggie Q) and a young wasteland sheriff named Hicks (Cam Gigandet).

Once the story moves away from the city, the intent is clear: This is “Cowboys vs. Vampires”. But these are vampires in name only. The slimy beasties look like hybrids between monkeys and those giant worm pit monsters from Peter Jackson’s King Kong. Eyeless creatures born from hanging pods, the fanged vamps may sleep in crypts and have devoted human slaves, but they have more in common with the four-legged “licker” from the Resident Evil franchise than any vampire you’re accustomed to. Hollywood continues to reinvent this movie monster in increasingly abstract ways: the classical and elegant Anne Rice version is preferable to the romanticized Stephanie Meyer teen heartthrobs, while the sharp-toothed vamps from 30 Days of Night present a clever edge. Most recently, Stake Land offered a quasi-zombie vamp. But this film’s interpretation exposes audiences to a cold-blooded, insect-like creature straight from the sci-fi animal kingdom.

Given the nature of the plot and religious themes, Priest manages to avoid subversive commentary and instead resolves to be an average post-The Matrix special FX fiasco. Plenty of underdeveloped subplots are glimpsed, such as Priest’s rebellion against the chief Monsignor (Christopher Plummer), while Stewart focuses his energies on snazzy, often silly visuals. Mid-air battles and a physics-defying bout atop a moving train will test an audience’s involvement. Made worse by the (post-converted) 3D presentation’s darkening effect, the already shadowy visuals render several scenes murky beyond comprehension. The concentration on effects should come as no surprise, however, with Stewart being a senior staffmember of The Orphanage, the effects house responsible for the visuals behind Sin City and Iron Man.

Stewart’s previous effort, the similarly-themed, effects-laden actioner Legion (which also starred Bettany) suffered from the same problems. But with Priest, the production value is higher, the script a bit more endurable, and the editing far less choppy. Even with these improvements, Stewart has yet to find a script that both tells a strong story and supports his ambitions as an effects maestro. Conventional dialogue results in a few hokey performances (particularly from Gigandet and Urban) and at least two other roles unworthy of their talented actors (Plummer, and a minor snake oil peddler role by Brad Dourif). It seems no matter how hard star Paul Bettany tries to establish himself as an action hero, he keeps choosing poor scripts. If yet another one comes along about a rogue hero defending the world from anonymous creatures, and Stewart wants to direct with Bettany as his star, the actor should pass, for all our sakes.