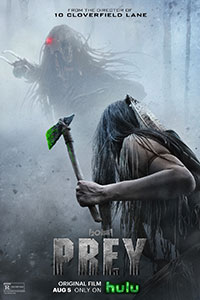 Every Predator movie has the same basic plot. A human warrior, who’s an elite killer or hunter, becomes the quarry when targeted by the towering, tendril-haired alien that stalks less-advanced species for sport. In the finale, the human turns the tables on the alien, eventually taking on the mandible-faced beast in a one-on-one battle to the death. After six entries in the last 35 years, few examples deviate from the model established by the 1987 original, starring Arnold Schwarzenegger, which remains an essential actioner from that era. Still, director Dan Trachtenberg’s new prequel, titled Prey, establishes itself as the most stripped-down, back-to-basics addition to the Predator franchise. Its refreshing simplicity applies the standard formula to a Comanche tribe on the Great Plains in 1719, centering on a young female wannabe hunter, Naru (Amber Midthunder), who proves her skills against the advanced alien. Prey at once supplies a strong empowerment narrative and a terrific platform for a cast comprised of mostly Native American and First Nations actors. It’s also the best Predator movie since the original.

This Twentieth Century Studios (formerly Fox) franchise has been uneven, to the extent that only director John McTiernan’s first offering elevates itself beyond cheap thrills. The 1990 sequel, Predator 2, remains a reaction to the contemporary panic over escalating urban violence. Its commercial failure prompted two unfortunate duds, the abysmal xenomorph crossovers Alien vs. Predator (2004) and Alien vs. Predator: Requiem (2007). Next came 2010’s Predators, an inspired idea about a hunting preserve populated by abducted humans. If the intriguing concept, stellar cast, and confident direction stood out, the screenplay’s overreliance on references to the original cheapened its novelty. Most recently, writer-director Shane Black, who contributed to the 1987 screenplay, sought to revive the franchise with The Predator in 2018, but reported studio interference resulted in a disappointment, albeit a diverting one. Unfortunately, most of these examples either prove too dependent on homage to McTiernan’s film or deviate by churning out weird DNA-spliced variations on the Predator monster.

Although Prey owes plenty to the original, it resists becoming a reference machine, allowing the audience to lose themselves in a refined story, written by Patrick Aison and co-conceived with Trachtenberg. The fatherless Naru has much to prove in her patriarchal tribe, where her brother Taabe (Dakota Beavers) and the other warriors doubt her hunting skills. Her mother (Michelle Thrush) doesn’t approve either, expecting her daughter to take on a socially ascribed role. But when Naru sees a Thunderbird (a spaceship) moving through the clouds, she takes this as a sign; she’s ready to undergo the tribe’s ritual of hunting something that’s hunting you—in her case, a mountain lion. While on the hunt with her disapproving tribe members, she sees tracks in the mud, bigger than any animal. No one believes her that something else, something they’ve never seen before, might be out there. After her lion hunt goes south, Naru defiantly sets out on her own to hunt the creature that has been skinning and frightening big game, determined to prove herself and return a warrior. 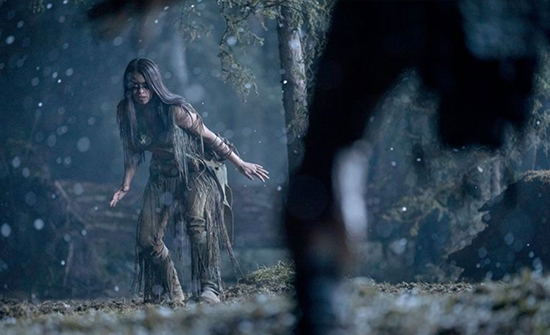 Shot in gorgeous locations around Alberta, Prey looks immaculate thanks to cinematographer Jeff Cutter’s ability to evoke the wild panorama inhabited by Indigenous peoples in pre-Revolutionary times. With her commanding screen presence, Midthunder spends much of the movie in natural landscapes, accompanied only by her character’s rather adorable dog, Sarii—and the combination of hero-and-dog versus aliens recalls a similar dynamic in Riddick (2013). Indeed, some of the story’s best moments involve Naru against Nature, navigating a grizzly bear attack or freeing herself from quicksand. Armed with a tomahawk she modifies with rope, Naru approaches every situation from a different angle than her male counterparts would, and she quickly discerns the Predator’s modus operandi. Watching Midthunder overcome every obstacle in her path becomes a rewarding experience, comparable to watching Sigourney Weaver and Linda Hamilton become their strong female heroes in the Alien and Terminator franchises.

Trachtenberg, the talent behind 10 Cloverfield Lane (2016), stages violence with clear-headed visual logic, composing Prey with beautifully conceived and realized action sequences. But Prey’s otherwise immersive and efficient tactility is sometimes undercut by its dependence on iffy computer-generated images. The animated wildlife on display sometimes looks cartoony, while the Predator (Dane DiLiegro) mostly appears as a cloaked, transparent blur. Although the Predator was once a convincing and elaborate creation by Stan Winston, when unmasked, its face now appears like a CGI blob—absent of the facial markings, slick skin, expressive eyes, or vaginal mouth that made the original’s alien so distinct—thus robbing the character of its tangible physicality. Here, it’s more of an ambiguous vessel for crafty, futuristic weapons and gizmos than a fully conceived character with a recognizable face. Perhaps that’s why the best action sequence involves an impressive fight between Naru and some scuzzy French trappers, captured in a single bravado take (or edited to appear that way).

With its high body count and unrelenting gore, Prey serves up an entertaining and juicy entry in the franchise, while also delivering a memorable, cheer-worthy female action hero from an underrepresented group. It’s bound to make Midthunder a star, but I wish the Predator received half as much attention as a character. Alas, the studio opted to debut the movie on Hulu, robbing viewers of the chance to appreciate Trachtenberg’s scope and vision on the big screen. The filmmakers also chose to have the Comanche characters speak in English (with the occasionally anachronistic line of dialogue, such as “I got this”). And while a dubbed Comanche track is available on Hulu, it’s not as though the production would have sacrificed box-office receipts by making a more unconventional, subtitled movie in Comanche; after all, 2006’s Apocalypto demonstrated that a historical epic in an ancient language could be bankable. But you can’t have everything. In its present form, Prey remains mostly a breakthrough and the best sequel to Predator yet. After years of disappointing and uneven franchise entries, it feels good to be excited about a Predator movie again.