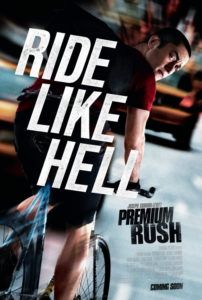 Premium Rush builds an incredible amount of tension from the unlikely action movie world of New York City bike messengers, where daredevils weave at high speeds through congested traffic, surviving (or sometimes not) a series of close calls and near-misses with moving cars and pedestrians. Co-writer and director David Koepp injects his signature brand of intrigue into this world, following cyclist Wilee (named after a certain cartoon coyote), played by Joseph Gordon-Levitt. Tasked with picking up a package from nervous coed Nima (Jamie Chung) from Point A and delivering it to Point B, Wilee is stopped by a nutso corrupt cop named Monday (Michael Shannon) who wants the package. Why he wants this MacGuffin isn’t nearly as interesting as the fast-paced chases that result, Wilee racing through and against traffic and alleyways with only a navigation system to guide him. It’s economical storytelling and remarkably energetic filmmaking, like Run Lola Run on wheels.

Koepp is best known for his screenplays, having punched out such A-list material as Jurassic Park, Spider-Man, and Indiana Jones and the Kingdom of the Crystal Skull. However, his co-writer credit here with John Kamps is more reminiscent of his work with Brian De Palma, namely on Mission: Impossible, Snake Eyes, and Carlito’s Way. Much like his De Palma collaborations, Koepp’s approach bounces back and forth and around the story from various perspectives, first from Wilee’s, then later from Monday’s or Nima’s. He uses a clever visual device in which he slows down Wilee’s split-second decision-making to show us the train of thought—as he approaches a busy intersection, Wilee sees every option: Turn right, and he hits a baby carriage; turn left, and he strikes a pedestrian; go down the middle, and he can just avoid that cab and squeeze by. Inevitably, he finds himself in a situation where there’s no foreseeable escape route, and he foresees himself crashing in slow-motion.

For the first time as a director, Koepp’s skill behind the camera has become as slick as his writing. In assembling what amounts to a 90-minute chase sequence, Koepp takes car chase formulas and amplifies them, following Wilee down busy city streets at incredible speeds from multiple angles, Monday’s comparably plodding automobile incapable of making Wilee’s maneuvers. Cars plug along as the bicycles speed by, weaving between peds and on sidewalks and against traffic for scenes that make you wonder how the hell they filmed this. Granted, the filmmakers probably used CGI to complete these shots, but if this is the case, it’s flawlessly integrated and never noticeable. Cinematographer Mitchell Amundsen uses wide, medium, close-up, and bird’s eye angles, all without ever resorting to modern norms of choppy editing or shaky cam. It’s pieced together by editors Derek Ambrosi and Jill Savitt in a way easy to understand and follow, yet breakneck-paced. The momentum doesn’t let up, and the wowing bike stunts never fail to enthrall.

The only aspect that may be more captivating than the bike chases is Shannon, who’s all manner of crazy here. At one point, Monday admits being told by his department’s shrink that he has “impulse control problems”. That barely sums it up. Only Shannon can play this kind of wacko character, the sort who takes a bullet square in the brain and yet, insanely, carries on for a time anyway. Shannon was born to play roles like this, and he often does. The actor has a long résumé filled with wild-eyed maniacs and fanatical weirdoes in everything from his Oscar-nominated turn in Revolutionary Road to lesser-seen, but no less wonderful arthouse fare like Take Shelter and My Son, My Son, What Have Ye Done. His manic intensity increases every volt of electricity surging through this film. This is not to discount Gordon-Levitt’s role as the straight-arrow messenger who lives in the moment, as the young actor continues to define himself as a capable leading man.

With no reservations, this is a film about The Chase, pure and simple. And unlike other humdrum chase movies that forget to suspend the pleasure The Chase provides, Koepp successfully extends that kinetic delight long beyond its conceivable limit. What a joy it is to be delivered such a coherent and smartly made action movie when so many these days are just the opposite, incoherent and dumb. In spite of the kitsch value of the title, which reminds me of the nineties Charlie Sheen skydiving flick Terminal Velocity, Koepp delivers an experience as unique as it is strangely familiar (think Quicksilver). Sure, we’ve seen corrupt cops with gambling debts chasing the good guy through the sprawl before, and we’ve seen bike messengers before, but not quite like this. With titles like The Trigger Effect, Stir of Echoes, Secret Window, and Ghost Town under his belt, Koepp has yet to find a consistent directorial mark; here’s hoping he makes another one like Premium Rush.