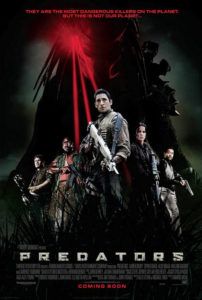 As guilty a pleasure as they come, Predators proves an entertaining sci-fi actioner that’s capably directed and well acted by an impressive ensemble. The story involves seemingly random humans being dropped onto a preserve for a race of alien hunters to pursue for sport. But the humans quickly learn they all have something in common; they’re all killers themselves, so they resolve to hunt the hunters. Directed by Armored and Vacancy helmer Nimrod Antal, this sequel derives its approach from James Cameron’s Aliens and increases the scope of the original Predator. The outcome innovates just enough to make the material feel like something new, even if the basic outline of the Arnold Schwarzenegger version is followed perhaps too closely.

Twentieth Century Fox’s Predator franchise never quite took off the way the Alien franchise did. Following the Schwarzenegger hit, Danny Glover starred in Predator 2 and delivered a major disappointment, followed by two abysmally bad Alien vs. Predator flicks. And yet, the original remains a 1980’s action classic. With these thoughts in mind, the filmmakers behind Predators have resolved to show their appreciation for the original by reminding us of how well Predator worked, and still works, by not straying too far from its structure. One could easily argue that the movie isn’t original, though sometimes a good copy is better than something lousy but new.

Adrien Brody plays the makeshift leader of the humans, a take-charge mercenary with a taste for hunting dangerous human prey. Though he’s best known for his Oscar-winning turn in Roman Polanski’s The Pianist, he’s been taking more genre roles in recent years, namely Splice and Peter Jackson’s King Kong. Brody beefed up to look the part and growls his lines so low that even Dirty Harry and Snake Plissken would be jealous. His presence alone increases the credibility of the movie, as he’s a talented actor who, despite being cast against type here, confirms he can fill almost any role.

Following Brody’s anti-hero are a whole slew of lesser anti-heroes, carefully selected by the alien hunters from around Earth to provide a diverse cultural variety. Alice Braga plays a politically driven sniper with scruples. Danny Trejo plays a tattooed Mexican badass (no stretch). Walter Goggins plays a death row convict. Louis Ozawa Changchien plays a yakuza gangster, who has a samurai sword showdown with a Predator in a memorable sequence straight out of Samurai Rebellion. Oleg Taktarov plays a Russian with a minigun. Mahershalalhashbaz Ali plays an African soldier. Laurence Fishburne appears in a ludicrous cameo as a crackpot who’s been surviving on the preserve for years. And Topher Grace plays an outwardly ordinary doctor whose presence among the others is puzzling.

It’s difficult to know if producer Robert Rodriguez was attempting to entirely reboot the franchise or simply just pay homage to the 1987 original. Though the location differs and the characters have more to offer, the plot barely tries anything new. Consider these scenes: the humans descend down a steep hill only to fall into a waterfall lagoon; there’s a prominent use of Little Richard’s tune “Long Tall Sally”; there’s a prominent use of a minigun; Brody’s hero covers himself in mud to avoid being detected by the alien hunters. These moments feel carbon copied from Predator for familiar audiences. What’s more, the characters are using dialogue by screenwriters Alex Litvak and Michael Finch that was, in some cases word-for-word, lifted from the original. This is no doubt meant in homage, but after three or four direct quotes the trend becomes a distraction.  Needless to say, the homages cause an unfortunate side-effect known as predictability.

Watch Predators because you’re looking for something guiltily enjoyable on a weekend afternoon. Watch if you’ve never seen the original, so you won’t have to cringe when Brody starts shouting “DO IT! DO IT NOW!!!” without an Austrian accent. Watch because you finally want an (even mildly) exciting entry in the franchise after twenty years. Fans of the genre accustomed to the drivel supplied by Predator 2 and the Alien vs. Predator movies finally have an agreeable piece of bloody R-rated fun to savor here. And even if those moments when the filmmakers are winking back at the original sting, it’s hard not to appreciate what Rodriguez and Antal have made: an entertaining piece of fan fiction.