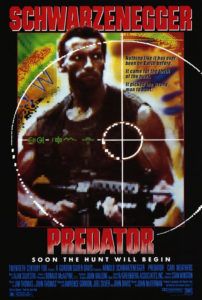 Muscles, machine guns, and testosterone radiate from Predator, a macho actioner of uncommon masculinity, a modicum of female presence, and monsters from space to boot. It’s a man’s man movie, the type where Jesse Ventura spitting chaw juices onto someone’s boot is an example of badassery as opposed to misplaced manliness. Emotions are nil, aside from expressions of violence, but that singularity is also part of its appeal. And its authority is so pronounced that two of its stars went on to become governors—Arnold Schwarzenegger for California and Jesse Ventura in Minnesota—perhaps because of some unconscious remembrance by voters of this very film. Who wouldn’t want a muscle-bound alien killer running their state?

Hired by the government for a supposed rescue op, Dutch (Schwarzenegger) and his band of mercenaries head into a Latin American jungle to rescue U.S. government officials that flew over the border by accident. Chaperoned by CIA stooge Dillon (Carl Weathers), Dutch and the crew quickly realize they’ve been duped into being an assassination squad. That pointless plot detail is forgotten as soon as the audience begins to see from the perspective of the Predator, an alien hunter with heat vision that’s stalking Dutch and his crew of elite soldiers for trophies. Armed with laser cannons and a crafty cloaking device, the alien hunter shadows the soldiers, who know they’re being hunted but don’t know by what. Quickly moving into a The Most Dangerous Game-esque scenario, Dutch finds himself the sole survivor and opts to make a stand, turning the alien hunter into the prey.

Director John McTiernan’s film is one of the only lasting examples from the “Planet Hollywood era” of action movies. The combination of a Schwarzenegger action movie with a creature feature is given a weird and wonderful harmony here, in that neither the action hero nor the creature takes precedence over one another. The peculiarity of Schwarzenegger’s muscle-bound onscreen oddity matches the freakishly large and mandible-laden face of the Predator hunter, like two inhuman titans battling for survival. These are two larger-than-life characters using their muscles and instincts to kill each another, and however predictable the outcome may be, the result satisfies in all the ways an action movie starring Arnold Schwarzenegger should. 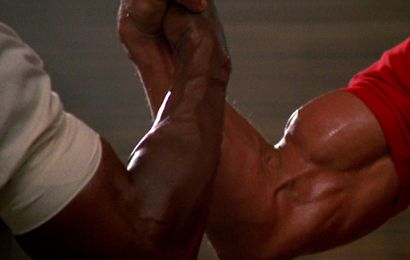 As Hollywood lore tells us, Predator came about when Rocky IV—the entry where raw-meat-pounding boxer Rocky Balboa faces off against a technology-boosted Russian, played by none other than Dolph Lundgren—left Hollywood joking that Rocky should box an alien in the next sequel. Supposedly, writers Jim and John Thomas decided to develop that idea into an Action Hero vs. Alien scenario, then known as Hunter. After Twentieth Century Fox purchased the script, producer Joel Silver, who had previously worked with Schwarzenegger on Commando, oversaw the project with co-producers Lawrence Gordon and John Davis, with McTiernan as the then-unknown director. Silver would later go on to produce such blockbusters as The Matrix and Sherlock Holmes, Gordon Hellboy and Watchmen, Davis I, Robot, and McTiernan stayed with Fox to direct Die Hard and Die Hard With a Vengeance.

As filming began in various sweltering Mexican locales, it became obvious that the production’s alien (a mishmash of absurdly combined animal parts), originally played by martial artist Jean-Claude Van Damme, was all wrong. The filmmakers had taken great care to cast a handful of muscle-men in the commando roles, all of whom dwarfed the leaner Van Damme locked inside his awkward, slowly baking suit. In addition to his protests about the costume, Van Damme grumbled that he wouldn’t appear onscreen in the flesh. After a long hiatus to fix budgetary and creative concerns, filming commenced when Van Damme was replaced by 7’ 2” actor Kevin Peter Hall, who had experience behind a mask playing the sasquatch in Harry and the Hendersons, and who achieved the desired result by towering over Schwarzenegger and the rest of the cast.

Fox commissioned special effects guru Stan Winston, who earned an Oscar for his work on Aliens and created an icon with The Terminator, to design the Predator alien. More Hollywood lore: While flying overseas to Japan on a promotional tour for Aliens, Winston toiled on concept art for the film; overlooking Winston’s sketches, director James Cameron said he had always wanted to see a creature with insect-like mandibles. Winston incorporated Cameron’s idea into the design, and the result stands as one of the most memorable movie monsters in all of cinema. Humanoid, with thick reptilian skin and tendril hair, the creature’s streamlined mask covers a face that burns into the audience’s memory. Add to its mandible-infused look an assemblage of neat alien gizmos designed by R/Greenberg Associates (including invisibility, infra-red scans, a shoulder laser, and luminescent blood), which earned an Oscar nomination for their innovations, and the creature itself nearly steals the show. 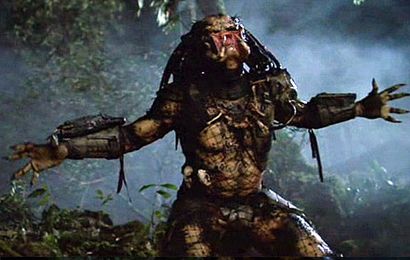 The final suit design was no more comfortable for Hall than the original was for Van Damme; moreover, Hall couldn’t see through the suit’s mask, which presented problems when he was asked to stalk down and engage in hand-to-hand combat with Schwarzenegger. But the cast and crew were subjected to their own physical toils from the Mexican jungles in Palenque and Puerto Vallarta. During the day, the heat and humidity caused drastic weight loss over time for those on-set, whereas night temperatures dropped enough to require heat lamps for warmth. Shooting on rough jungle terrain and leech-ridden bogs left the crew exhausted, and they later compared their experience to an extended survival camp. However difficult their toils, the location photography by Donald McAlpine (The Chronicles of Narnia: The Lion, the Witch and the Wardrobe) proves to be one of the film’s most enduring features, immersing the audience in the setting throughout the first half.

Completed for $18 million, the release tripled that at the box office. Critics largely dismissed the film; however, it has stayed with audiences over the years and has slowly become a favorite for both Schwarzenegger fans and genre buffs. For Schwarzenegger, coming off The Terminator, it was another rare entry in an otherwise humdrum career of commercially successful, but mind-numbingly standard shoot-em-ups. Granted, he does your typical action movie stuff here—such as throwing a massive knife to secure a guerilla to the wall, then delivering the line “Stick around!” with a half-cocked smile—but that’s what you get when Schwarzenegger is involved. Along with Paul Verhoeven’s Total Recall, it remains one of the actor’s most memorable, consistently watchable efforts.

Alan Silvestri’s superb score draws on a military-esque tempo, heavy on horns but deficient in the corny, synthesized quality that adorns most actioners of this era. By the time the Predator hunter appears onscreen, we’re immersed in the setting and we believe its presence, our suspension of disbelief scarcely taxed. What other actioners from this period can say the same? Not many. Few 1980s action movies hold up today, aging badly due to era signifiers in the soundtrack or contemporary dress, or basic formal presentation. Watching the majority of those Planet Hollywood action stars in their ‘80s and early ‘90s films today, one can’t help but notice those out-of-date details that remove us from the story. Predator has aged extremely well, enough to call it timeless, in that the story and the presentation establish an infallible setting without relying on specific epoch signifiers. With McTiernan’s craftsmanlike direction delivering action scenes that are easy to follow and at times simply wowing, Predator finds itself among the best of the big, R-rated action movies. How strange to consider any Arnold Schwarzenegger film worthy of high praise. And yet, here’s one of the handful of exceptions where the Austrian body builder-cum-action hero finds himself in a great movie.