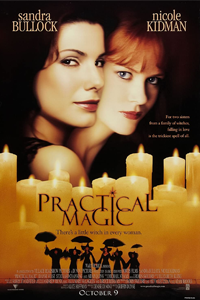 Watching Practical Magic, I thought to myself that the book is probably much better. The 1998 adaptation is based on Alice Hoffman’s 1995 bestseller about sisters Sally and Gillian Owens, who come from a family of witches dating back to the Salem witch trials. Strangely, the film is part romantic comedy and part domestic thriller, with a hint of the supernatural. It boasts silly ideas about love and courtship, offering a central romance propelled by fate and whimsy. But there’s also a dark strain involving possession by the vengeful ghost of a man who violently beats women. Although I haven’t read the book, I must imagine Hoffman handled the shifts in tone and genre better than director Griffin Dunne (best known as the star of Martin Scorsese’s 1985 film, After Hours). Dunne’s work as a director primarily involves lighthearted comedies such as Addicted to Love (1997) and The Accidental Husband (2008), and unfortunately, Practical Magic is light studio fare with mere hints of something darker and more complex underneath. Even so, it’s kind of enjoyable after a glass of wine or two.