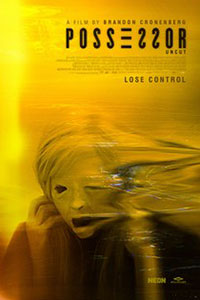 With Possessor, Brandon Cronenberg considers the relationship between the avatar and its operator, and by extension, the disconnect between the mind and body. His sophomore effort involves an elite assassin who hijacks the mind of an unsuspecting target, turning them into a vessel, inside of which she carries out a mission before altogether discarding the host body. Her methods are a cross between the agents from Christopher Nolan’s Inception (2009) and the zombie fungus found in some tropical forests that takes over ant brains to spread its spores. Though made at an emotional remove, Cronenberg nonetheless delivers a mind-bending thriller that makes incredible use of disturbing imagery, gory special effects, and hallucinatory visuals that will continue to ring in your unconscious well after you’ve forgotten the particulars of the story. The scenario proves vaguely familiar, as science-fiction fans will recognize, but it’s handled with such confidence and severity that it ignites a slight burn on the brain.

Possessor revolves around Tasya Vos (Andrea Riseborough), an experienced killer whose handler, Girder (Jennifer Jason Leigh), guides her through each assignment and the psychologically confusing aftermath. In the opening’s post-mission evaluation, Vos looks through a series of objects and identifies them, describing her memories of each. She sometimes spends days living in her host’s body, ported into them using a brain implant and an elaborate virtual reality chamber. Vos’ escalating need to rediscover herself after long periods of being someone else has led to an estrangement with her husband and child, but that doesn’t prevent her from ignoring her worsening symptoms and returning to work. Her latest mission entails killing John Parse (Sean Bean), the head of a relentless data-mining company called Zoothroo. To do this, Vos will enter Colin (Christopher Abbot), the boyfriend of Parse’s daughter, Ava (Tuppence Middleton).

While these details would be the source of lengthy expositional scenes in another filmmaker’s hands (such as Nolan’s), Cronenberg’s screenplay elegantly drops subtle details, allowing the viewer to gather information along the way. Admittedly, the plot recalls 1990s thrillers such as Virtuosity (1995), Strange Days (1995), or even Dark City (1998), where the conflict between consciousness and psychosomatic fallout remains central. But it’s Cronenberg’s nightmarish and caustic mood that distinguishes Possessor, coupled with gruesome effects that convey the violent events of the mind with startlingly fleshy imagery. When Vos eliminates her targets, Cronenberg renders the scenes with gooey practical effects that cause gasps and recoils. And beside some hackneyed scrambled-brain flashes that look like the simulated sex from Demolition Man (1996), Vos imagines her control of, and eventual separation from, Colin with gobs of visceral and unnerving mask imagery—projections that manage to shock, disgust, and intrigue in their brief pulses onscreen. 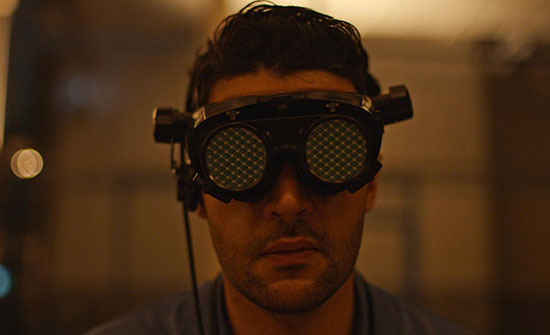 Almost immediately, Vos experiences “minor artifacting and synch loss” inside of Colin, which gradually degenerates to the point where the viewer remains unsure who’s in control of the host. Whether it’s Vos manipulating Colin to questionable success (suspecting something’s off, Ava tells Colin, “You’ve gone strange on me”) or Colin gaining back control, the results offer some fine performances. Abbot is particularly good; he has to capture a character with two personalities vying for control of his head. Still, there’s not much meat on these characters. Cronenberg’s screenplay is focused on the plot and its violent outcomes, whereas his characters have only a hint of depth and nuance. Take Vos, who experiences, doubtlessly not for the first time, sex with a woman through her male host. There seem to be questions of sexuality, gender, and identity that remain under-explored here; more concentration on the psychological toll of Vos’ occupation might have been warranted.

After his first feature, the muddy, but compellingly made Antiviral (2012), it’s apparent the apple didn’t fall far from the tree. The Canadian filmmaker’s father, David, carved out a niche for himself in the 1970s with low-budget exploitation movies like Shivers (1975) and Rabid (1977), made with tax shelter dollars. The elder Cronenberg, sometimes called the King of Venereal Horror, continued to grow and develop over the next decade with titles like The Fly (1986) and Dead Ringers (1989), before setting aside his body horror roots for less gore-centric films. Though, his sophisticated dramas like Spider (2001), A History of Violence (2005), and A Dangerous Method (2011) were no less concerned with the mind-body dichotomy. It’s tempting to read Possessor through the lens of his father’s work, and perhaps also unfair to Brandon’s individuality. Then again, some of the similarities remain difficult to ignore.

Possessor feels like a variation on themes more thoroughly explored in his father’s cinema. Brandon’s preoccupation with corporate espionage and assassination recalls a number of David’s films, including Videodrome (1983) and eXistenZ (1999). The notion of invading someone’s mind to create an effect on the body draws from Scanners (1981), while a futuristic tech that alters the mind and raises questions about reality borrows from Videodrome and eXistenZ as well. Moreover, Possessor walks the fine line between science-fiction and horror, just as David’s films from the first half of his career did. Each of these examples contains themes of technological and futurist anxiety, demonstrating how our reliance on devices and digital modes of seeing the world distances us from a physical relationship with reality. And yet, these concerns are realized with ghastly consequences on the body that situate them in the horror genre.

However, the similarities between father Cronenberg’s and his son’s output should not be considered a negative characteristic. David Cronenberg hasn’t made a straight horror film for over 30 years, and so it’s refreshing to see Brandon continuing his career in his father’s early footsteps. Those who prefer to associate the name Cronenberg with body horror will find it easy to celebrate Possessor, which debuted at the Sundance Film Festival in 2020 and has since earned an “Uncut” release in theaters and VOD by Neon. The film shows Cronenberg’s leap in skill and storytelling after Antiviral, evidenced in the slick cinematography by Karim Hussain and the masterful control of mood, revealing a filmmaker in control of his vision. If his trajectory is anything like his father’s, hopefully, his next film will contain equal measures of emotional substance to match his blend of the intellectual and visceral.