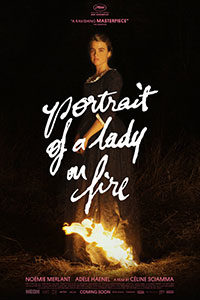 In Greek mythology, Orpheus, the son of Apollo, marries a beautiful woman named Eurydice. When she dies suddenly, Orpheus descends to the underworld and brokers a deal with the resident god, Hades: If Orpheus can lead Eurydice from the depths without looking at her, then they can return to the world of the living together. Orpheus begins his ascension, but he cannot hear Eurydice’s footsteps behind him. As Orpheus nears his destination, he worries that Hades has tricked him, and he looks behind him only to see his wife, floating in ghost-like form and unable to make footsteps, and in breaking his bargain, he loses Eurydice forever. It’s a story referenced more than once in Céline Sciamma’s Portrait of a Lady on Fire, an eighteenth-century queer romance about how looking can be dangerous, even though sometimes our passions cannot help but compel our gaze. Its characters read the myth and discuss its implications at one point, and later, it’s reinterpreted in a painting, albeit with a heartrending alteration. Sciamma uses the myth to inform her film’s discussion about art, desire, and the act of looking, the persistent dynamics between the observer and the observed.

Portrait of a Lady on Fire won the 2019 Best Screenplay award at the Cannes Film Festival, as well as the Queer Palm award. It’s Sciamma’s fourth film after Water Lilies (2007), Tomboy (2011), and Girlhood (2014), each about the awakenings of queer sensation and experience among young women in their teens, each contemporary stories set around Paris. This is the French writer-director’s first period piece; however, it’s made with all the confidence and formal acuity of a master, as though Sciamma had been trained by Jane Campion, James Ivory, and Ismail Merchant. It’s also a film that owes its look to classical portraiture in its use of earth tones, muddy browns, and bright highlights on fabric and flesh. The story opens as a young painter, Marianne (Noémie Merlant), travels to an island in Brittany. She is strong-willed and independent, evidenced on the rowboat there, when a crate containing her stretched canvases falls overboard into white-capped waters, and she leaps in after them. Her self-reliance as a mercantile worker is furthered after she arrives at the estate where she will paint, and she dries her nude body by the fire, smokes a pipe, and then helps herself to bread, cheese, and wine in the kitchen.

Marianne has been commissioned by a countess (Valeria Golino) to paint a portrait of her daughter, Héloïse (Adèle Haenel). The countess has arranged a marriage between her daughter and a Milanese gentleman, who has agreed to the coupling on the condition of seeing and liking Héloïse’s portrait. Her sister, who was engaged to the same man, killed herself rather than submit to the marriage. Héloïse has refused to be seen, and the previous male portrait painter has left the estate unsuccessful. Marianne arrives under the pretense of a temporary companion for Héloïse, and she sneaks glances, makes clandestine sketches, and then paints them later. But in their time together, Marianne confesses her secret agenda, and the two develop a secret romance, which blossoms when the countess goes away for several days, leaving them on an island, their only company a friend and household servant, Sophie (Luana Bajrami). What unfolds is a love story that may be a taboo in their society, but within the context and spatial isolation of the film, it exudes a thrilling freedom and equality. 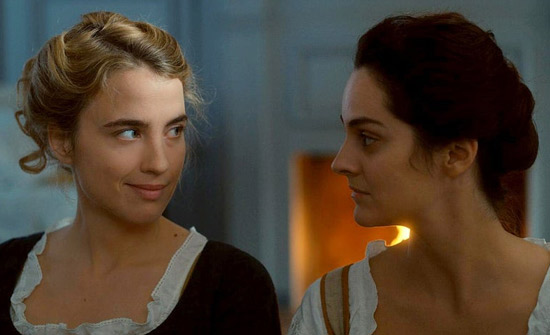 To be sure, Sciamma finds a balance between Marianne and Héloïse, and therein, she discovers an alternative source of conflict that defies the conventions of gender dynamics, power roles, sexual pursuit, and social hierarchy. These tensions that so frequently occur between straight couples have less chance of emerging between two women or two men, where gender roles resist common archetypes and often shift according to factors such as personality, class, and occupation. Some of those elements play out between Marianne and Héloïse, as the former is an artist, an employee commissioned for a job, whereas the latter comes from a family of some status. Even so, Marianne does not feign subservience, not as an employee nor a lover, nor does Héloïse become an object to be observed by a superior artist. By the second half of the film, Héloïse has grown so comfortable as Marianne’s subject that the artist and model work as one, creating art together. There’s an inspired moment after the two help Sophie acquire an abortion when Héloïse announces, “We’re going to paint,” and then stages the scene for Marianne, a rendering of the abortion in which they’ve all just taken part.

The film also eschews both the male perspective and the usual queer stereotypes found in cinema in its alluring balance between Marianne and Héloïse. Sciamma’s screenplay acknowledges the ruling patriarchy, both in Héloïse’s fate with the Milanese nobleman and the brief appearance of boatmen that transport Marianne to the island. The social power of men over women remains a reality, but much of the film takes place away from its immediate enforcement, as barely any men appear onscreen. Additionally, the usual roles for queer characters, especially in period pieces, as doomed figures or characters just dabbling in gayness, also have no place in Sciamma’s film. Rather, there’s a sensual and idyllic equality shared between Marianne and Héloïse; they belong to roughly an equal class stratum, but they’re also the same height and relative beauty, creating a harmony between them. In the overwhelmingly emotional final scene, both Marianne and Héloïse attend the live performance of an orchestra, and their equal class means they can sit in boxes opposite each other across the auditorium. It allows Marianne to watch Héloïse in a moment they share, even though Héloïse doesn’t know it.

Sciamma’s insistence on equality between Marianne and Héloïse defies much of what we understand about the power held by artists, the gaze, and the artist’s ability to choose and possess a representation, and thus influence how the viewer looks. Because Marianne sees Héloïse as an equal, her initial portrait remains unsatisfactory—it is a product of the “rules, conventions, and ideas” of the classical portraiture in which Marianne was instructed. “Is this how you see me?” asks Héloïse to devastating effect. Marianne has such affection for her subject that she cannot deliver the portrait in its present condition. She destroys it to start again. Marianne then denies the traditions of representation and possession to embrace their mutual attraction and gaze. In their growing respect and love, the power of the gaze and its creation on the canvas become something shared and agreed upon by both parties. This is a theme echoed as Marianne and Héloïse first embrace romantically, and Héloïse asks, “Do all lovers feel they’re inventing something?” That something is a solidarity and collective understanding, even though it settles in a forbidden romance. It’s a disregard for the notion of ownership in any form—from a material possession to relationship status—apart from the memories they have of one another. 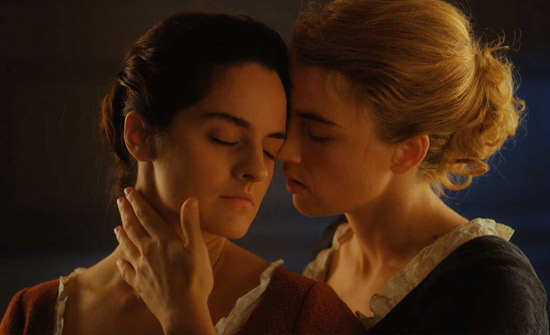 Philosophically and formally, Portrait of a Lady on Fire has been constructed with rigorous attention to detail. Just as Marianne and Héloïse avoid typical romantic and representational modes, Sciamma does not submit to a traditional costume drama with a big score and melodramatic plotting. Instead, there’s a lack of non-diegetic music and a concentration on natural sounds, a heightening of footsteps on the wood floors, crackling fires, and the sound of a brush on canvas. The single piece of music is Marianne’s performance of the “Summer” concerto from Antonio Vivaldi’s The Four Seasons, the same piece that proves so stirring in the extended last shot. Visually, there’s a vivid, painterly sense of light at work. Note how the film captures the beachside glow in Marianne and Héloïse’s long walks together, as though Sciamma and her cinematographer Claire Mathon have caught the moisture in the air, the substance of light itself. The freedom of the exteriors presents a contrast to the interior scenes, where what happens onscreen makes for unlikely subject matter given the traditional methods in which its depicted. Watching the film, every flourish has a metaphoric intention linked to the story’s themes of looking, representation, and longing.

Sciamma has made a film rich with symbolism and parallels across various forms of art, including literature, painting, music, and cinema. Portrait of a Lady on Fire is every bit a celebration of artistic representation, its traditions and alternatives, as it is a testament to queer love. At the center are two extraordinary performances, perfectly calibrated and nuanced, by Merlant and Haenel. As Marianne and Héloïse, they must be both trapped in their socially mandated roles yet appear to share a personal freedom in their mutual affection—it’s a push-and-pull always at work within Portrait of a Lady on Fire. Although the titular painting, mentioned in the first scene, has less of a presence later in the film than one might expect, Sciamma’s careful study of this relationship resonates with emotion and sensuousness. It’s a film that acknowledges the limits of reality even as Sciamma finds overriding freedom in her characters’ yearnings, making, as one character observes, not “the lover’s choice, but the poet’s” in telling this story.