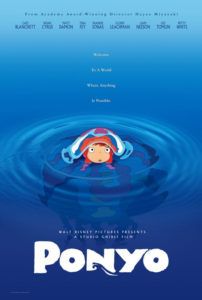 Within the first moments of Ponyo, the viewer witnesses a wondrous, living seascape emerge from a few droplets of magic. Deep beneath the surface of the water, a wizard of sorts places beads of elixir into the ocean; springing from his potion are all manner of undersea creatures—jellyfish, crustaceans, octopi, and various other aquatic creatures of every color. A coalescent stream of life fans out, all surrounded by the big blue. The wizard’s concert fills the sea; he stands over it proud, the conductor of a living opera. From his toiling, the wizard has created splendorous life, much in the same way that Ponyo’s director, Hayao Miyazaki, has instilled an indescribable sense of the organic into this film, all through the magic of his artistry.

The only true artist still working with the traditional, two-dimensional form of animation on a consistent basis, the 68-year-old Miyazaki uses hand-drawn stills, many of his own creation, though all are derived from his artistic conception. His unique stylization, painted backgrounds, and graphic foregrounds result in a story that feels rendered by human hands and not advanced computer programs (though computers were used, their use does not show). Miyazaki dabbled with computer animation on his most recent three films (Princess Mononoke, Spirited Away, and Howl’s Moving Castle), using them to fill backdrops or help flesh-out action sequences. However, he opted to finish an almost completely hand-drawn film with Ponyo, contributing more than 180,000 drawings on his own, versus overseeing the usual team of animators working at Studio Ghibli. The resulting effect makes every frame feel deeply personal. But the hand-drawn quality also lends a sense of organic life, even more so when applied the oceanic storyline.

Made for children of all ages, even us big ones, the poetic and touching film centers on a boy named Sosuke. Playing on shore near his seaside home, Sosuke sees what he believes is a goldfish trapped in a jar. Upon closer examination, he sees it has a fish body with fins but the face of a human girl. He sets her free and revives her, cutting his finger on the jar in the process. She licks the blood from his finger and having tasted it, she can now transform back and forth from fish to human. He names her Ponyo. Their friendship commences when Ponyo stays with Sosuke and his mother, learning human ways like eating noodles and sleeping underneath warm blankets. These moments are tender and joyful, and they’re the most pleasant in the film.

Searching for Ponyo is the wizard, her father Fujimoto, who created her to help restore authority to his undersea world. Fujimoto makes allusions to wiping out humanity for its crimes against the oceans. He calms as the story moves forward, his concern aimed at recovering his most beloved daughter. And briefly, he does return her home, but she escapes, drinking from her father’s elixirs derived from the depths of the sea to gain mystical powers. She releases massive amounts of this power in her return to Sosuke; a swell of tsunamis and flooding shifts the balance from humanity to Nature—but even if the scale has tipped to the other side, there’s still an unbalance. 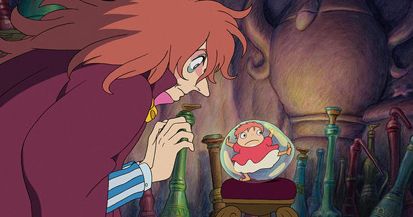 Embedded into the subtext, Miyazaki puts forth notions that humanity and the oceans must reach equilibrium, and when they do, their fear of one another may disappear. Fujimoto glides beneath the surface near a harbor port, his head peeping out and battered by floating debris; he remarks how filthy humans are, and how afraid he is for Ponyo to become like them. But when she links these two worlds, amazing things happen. A cleansing tsunami rolls over the coastal village, imagery startling for Japanese viewers who won’t soon forget the December 2004 Indian Ocean ruin; except the result is not devastation, rather a curious balance between land and sea creatures. In connecting these two worlds through her transformations, Ponyo does something impossible—but also unnatural to the normal ecological course of things. Miyazaki remains hopeful for coexistence, yet realistic. Perhaps he suggests that we should do every little thing we can to care for these sea worlds, and then karma will take care of the rest.

Hans Christian Andersen’s story The Little Mermaid provided the inspiration for Miyazaki’s story; however, the source feels rooted in fantasy, whereas there’s something more tangible about Ponyo. Instead of wacky ocean creatures singing songs about life beneath the waves, as seen in Disney’s classic fairy tale adaptation, Joe Hisaishi’s score provides heavy notes of emotionally resonant music, allowing Miyazaki’s thematic tropes to elevate the material. His animated pictures have always explored worlds best described as magical. They’re marvelous places without limitation in either their narrative breadth or animated scope; they’re also places where the world of Miyazaki’s imagination reflects the real one. Through allegory rooted in environmental commentary, Miyazaki’s films contain a great respect for Nature. The protagonist from Nausicaä of the Valley of the Wind had more in common with the deadly wildlife in the toxic forests than with her people; Castle in the Sky warned of how technology would ultimately destroy our world’s natural beauty; My Neighbor Totoro offered a fairy tale about Nature’s forgotten spirits; Princess Mononoke considered the end of Nature’s wonders with the beginning of industry. This list could go on and on.

The other common Miyazaki theme prevalent through his career and central in Ponyo is the importance of family and friendship. Whether he’s offering an environmental argument or not, family and friends reside at the heart of every one of the director’s films. Sometimes family is a tight unit of siblings and parents (My Neighbor Totoro), other times it’s the friends found on a long journey of self-discovery (Kiki’s Delivery Service). But when combined here, Miyazaki makes his most established themes one. Fujimoto tries to reassemble his link with Ponyo; Sosuke tries to bring someone else (Ponyo) into the family to replace his out-to-sea father. All the while, the Japanese oceanic landscape reflects the emotions of the characters in fluid life.

In Japan, Ponyo took in $164.6 million, and its success incited distributors at Disney to give the film a mainstream release in America. Backed by Miyazaki promoter and Pixar head John Lasseter, the film opened on more than 900 screens, whereas the director’s previous films opened in the U.S. on never more than 40 screens. Still, it was not Miyazaki’s most successful film at the U.S. box-office, likely because it avoided now-popular Western ways of storytelling. After all, how could Disney distribute a film to Western audiences that speaks so personally to Japanese viewers, yet doesn’t contain computer animation or a third, useless dimension? Miyazaki keeps animation relevant in its raw, painterly form, mirroring the way in which Fantasia and Snow White and the Seven Dwarves are art. He creates depth in 2-D animation when so many studios, now even Pixar (for shame), have needlessly resorted to the gimmicky device of 3-D. Doubtful we’ll ever see a 3-D Miyazaki film, and what a relief that is. It takes indisputable mastery to manipulate computers and make something like Up or WALL•E, but it takes pure craftsmanship to create a work like Ponyo. As the most successful filmmaker of any kind in Japan—his 2001 film Spirited Away still holds a box-office record there—Miyazaki represents the last animator still wholly dedicated to an artform that is slowly dying. Relish animated films like this while you can.