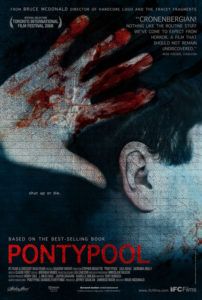 Talk radio has never been my chosen diversion. What’s the appeal of listening to people chit-chat about nothing at all when their on-air personalities are forced, making everything you hear artificial? People listen to talk radio, I think, because it provides a connection of sorts—the noise fills empty space. But the words themselves have little meaning. Watch someone listening sometime; they’re not necessarily aware of what’s being said, but the sounds of the spoken word retain some importance. Pontypool considers how the meaning of words, or lack thereof, might transmit some undercurrent when they’re spoken, like a linguistic virus. Writer Tony Burgess adapted his own novel Pontypool Changes Everything for director Bruce McDonald, who creates a claustrophobic blend of high-concept scares and zombie terror. Except, it doesn’t feel overly brainy, and the zombies aren’t zombies at all. They are chatterboxes falling victim to their overuse of the English language.

Appropriately, the characters consist of two small-town talk radio producers and the new morning-show jockey. Formerly an in-your-face broadcasting personality, Grant Mazzy (Stephen McHattie) has since found himself demoted to the snowy blackness of Pontypool, Ontario, spouting out updates on snow-day school closures and traffic alerts, while desperately trying to infuse his own sarcastic sense of shock-jock individuality by pissing people off. The young technician Laurel (Georgina Reilly) seems to admire Mazzy’s celebrity, whereas his producer Syndey (Lisa Houle) warns him about showboating himself: “People are just going to think you’re a dick.”

And so, it’s just another day in Pontypool, until the voice of Ken Loney reports on-air from his “Sunshine Chopper” that some sort of riot has occurred down at the office building of Dr. John Mendez (Hrant Alianak). There’s an explosion. Dozens of people are dead. Ken sounds frightened. He reports military vehicles and helicopters are moving in. Syndey and Laurel can’t find anything about the event on the wire. Is this some sort of War of the Worlds-like hoax? None of the major affiliates have anything on what’s going on out there. There’s just the sound of Ken’s voice, the sound of Mazzy’s, and the befuddled looks of Laurel and Sydney. As French linguist Roland Barthes observed, “Trauma is a news photo without a caption.” Mazzy narrates reports as they come—testimonials of strange crowds with people chanting and biting—without being able to confirm what’s out there. Witnesses call in, speaking in indecipherable tongue, repeating words like a broken record. The effect is unsettling.

Now imagine a horror film with equal parts influence from Barthes, Noam Chomsky, and David Cronenberg, and somewhere along the line, you’ll have Pontypool. At the midway point, the story takes a turn and begins to explain these bizarre events. A type of zombie-ism has taken over Pontypool, which Dr. Mendez appears mid-film to explain (albeit unnaturally within the progress of the story). The infected are stricken by a linguistic bug inhabiting the English language. Grasped by a vocabulary that progressively loses its meaning, the victims become locked on a specific word; they can’t express themselves, and then they attack, trying to eat their way into intelligible words by chomping out the mouth of another person. Is Mazzy’s broadcast making the situation worse? Probably. But we can’t see that. We’re only concerned about Mazzy and Syndey’s survival in the radio station. They take to speaking French to avoid becoming infected. Had this story taken place in America, where most citizens are not bilingual, the movie would’ve been much shorter, or much grimmer.

This is where viewers will either lose interest or latch onto the material and realize McDonald has made something beyond your normal undead brain-eater flick. It’s important to clarify that Burgess’ story is not about shock value, rather conceptual ideas that infect the mind. Without splattering blood about, at least not gratuitously, McDonald makes his few moments of gore really spray to jaw-dropping extremes. However, there are only one or two such displays within the film. Most of the picture centers on McHattie and Houle trying to grasp the scope of their panicky situation, allowing the superb actors an entire film with which to demonstrate their obvious talent.

Shot on a shoestring budget in the basement of a church in Ontario, Pontypool has an indie movie feel that doesn’t reduce its quality but instead enhances its realism. Comparable to the paranoia of Right at Your Door, the sensation of madness from The Signal, and the crucial sense of mutating our contemporary world against us from 28 Days Later, McDonald’s film has bold ideas and the delivery to match. Finding this film in theaters may require a drive to your nearest art house cinema, as distributors at IFC rarely make the effort for a wide release when they can offer it On Demand through their website or various cable providers for much cheaper. But the result is indisputably disturbing, and thought-provoking, so it’s worth seeking out. Though, the drive home may be a quiet one.