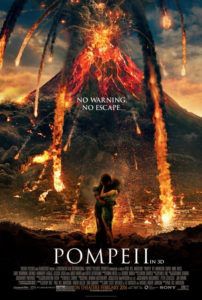 Cheese flows by the volcanoload in Pompeii, the latest megabudget debacle from director Paul W.S. Anderson, the hack behind Alien vs. Predator and the Resident Evil franchise. Despite a reported $100 million budget, Anderson brings his typical C-grade production value and derivative approach to this historical epic of swordplay and romance. To accommodate his usual lowest-common-denominator crowds, he borrows common elements from better movies unreservedly, and so every single moment feels familiar. The movie is set in the fateful days before the 78 AD eruption of Mount Vesuvius, but the story spends more time on tiresome gladiatorial bouts, unsophisticated politics, and an undeveloped romance than on the ancient catastrophe itself, which does not occur for more than an hour into this 98-minute feature. One-dimensional characterizations and ham-fisted acting leave the experience empty, while Anderson’s inept handling of the material is true to form.

Sweeping, digitally rendered shots overhead Pompeii keep the mountain in view and the audience anticipating its eruption, while below dull characters carry on their soapish lives. Noblewoman Cassia (Emily Browning) returns home after an extended visit to Rome ended badly, and on the road she notices a line of gladiator-slaves, among them Milo (Kit Harington), a sensitive brute. Milo’s Celtic people were wiped out in Pompeii’s 17-years-earlier prologue by none other than Cassia’s obsessive suitor, Senator Corvus (Kiefer Sutherland). Along with his loyal soldier Proculus (Sasha Roiz), Corvus too enters Pompeii to negotiate an investment deal with Cassia’s parents (Jared Harris and Carrie-Anne Moss) so that Rome might supply funds for refurbishments around Pompeii (in hindsight, an ironic goal). But when Corvus finds Cassia there as well, he uses her father’s desire for investors to secure himself Cassia’s hand in marriage. Meanwhile, Milo must survive gladiatorial bouts both against and alongside the resident champion Atticus (Adewale Akinnuoye-Agbaje), and as he does, Cassia keeps an enamored eye on him. Of course, Corvus notices their lusty glances at one another and takes it personally. It all comes to an underwhelming head when Vesuvius’ top explodes in clouds of ash.

Pompeii is the kind of movie which must unavoidably be described by comparing it to other movies. The gradual volcanic foreshocks and warning signs early on recall similar scenes from 1997’s dueling volcano movies Dante’s Peak and Volcano, complete with shots of boiling lakes set to grimly foreshadowing music. The plot strains following Milo and Atticus in the gladiatorial arena have soaked up influence from Spartacus and Gladiator like a sponge, particularly in scenes between Milo and Atticus which parallel the Russell Crowe/Djimon Hounsou relationship in Gladiator. Milo and Cassia’s ill-fated romance, beset by a monumental disaster, lifts from an identical arc in Titanic; so does the Milo-Cassia-Corvus love triangle which mirrors the Leo-Kate-Billy Zane triangle in James Cameron’s film. Writers Michael Robert Johnson (Sherlock Holmes) and the husband-and-wife team of Lee and Janet Scott Batchler (Batman Forever) combine these elements in their original screenplay, and Anderson, the resident Dr. Frankenstein, sews them together into an abomination.

A few years ago, Roman Polanski was slated to tell Pompeii’s story in an adaptation of the book by Robert Harris, who also authored Polanski’s excellent The Ghost Writer. Anderson is a far cry (about a million miles) from Polanski in terms of skill, as evidenced in the production’s sloppy construction and overreliance on digital effects. Action scenes in the arena unfold with clumsy moments of slow-motion and jarring uses of shaky cam, whereas Anderson’s attempts to make the scenes as visceral as his PG-13 rating allows result in some conspicuous cutting around would-be bloodshed (expect this to be corrected in the inevitable “unrated edition” home video release). And once Vesuvius starts to blow, visual FX supervisor Dennis Berardi muddies the screen with layers of CGI ash, and Michele Conroy’s choppy editing doesn’t help the movie’s issues with clarity. All the while, Anderson strains our suspension of disbelief as characters somehow outrun waves of deadly hot gas and fiery rock flowing out from Vesuvius.

Beyond improved effects or a more original storyline, what Pompeii needs most is a better voice coach, in particular one to bring some order to the horrible faux-English accents delivered by Browning, Moss, and most egregiously by Sutherland (whose over-the-top performance is a career worst). Harrington, popular from HBO’s Game of Thrones, couldn’t have less personality, while Browning does little more than pout her lips. The experience might’ve been watchable in a “guilty pleasure” disaster movie way, except the storyline is such an offensive contrivance and the romance subplot grossly underdeveloped. Our only consolation during the movie is that most of these characters will perish in the ensuing eruption. Afterward, we cannot help but wonder why when an estimated 16,000 lives were lost when Vesuvius erupted in 79 AD does Pompeii tell a story about the least interesting of them?