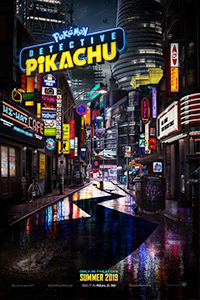 As I watched Pokémon Detective Pikachu in a theater teeming with children, I quickly became aware that I was not the right demographic for this sort of blockbuster. The Pokémon franchise first emerged in the 1990s, and we have never crossed paths: I have never played the card games, watched the popular television series or movies, or explored the Pokémon Go app. Pop-cultural osmosis has ensured my awareness of the kawaii-infused Pikachu and the consumer-enabling catchphrase “Gotta catch ‘em all,” but otherwise, I am a neophyte in the Pokémon arena. The children in my screening, however, knew every character onscreen. Small voices rumbled throughout the proceedings. “Look, a Squirtle,” said one voice. “Aww, a Bulbasaur,” remarked another. It was achingly apparent that the movie, based on a popular videogame, was loaded with references I could not identify. I felt like an old fuddy-duddy who was oblivious to a secret that everyone else knew.

But then, the children in the audience no doubt remained unaware of how this movie is little more than a lazy pastiche of film noir and neo-noir aesthetics borrowed from the likes of The Big Sleep (1946), Blade Runner (1982), and Who Framed Roger Rabbit? (1988), along with several random 1990s references. The movie might be accused of wrapping nostalgia in nostalgia, although perhaps it’s easier to call the thing post-modern. Given its dependence on the past, it’s evident the screenplay (credited to Dan Hernandez, Benji Samit, Derek Connolly, and director Rob Letterman) hopes to engage its adult audience, who grew up with Pokémon in the 1990s, by making several pop-culture references from that general era. Note how one character tries to calm someone by quoting “serenity now” from Seinfeld, how a black-and-white detective movie glimpsed on a television is the parody “Angels with Filthy Mouths” from Home Alone (1990), and the climax involving gas-filled parade balloons recalls the finale of Batman (1989).

Set in the futuristic Ryme City, where humans and Pokémon coexist in some kind of harmony, the story unravels amid neon signs and rain-drenched city streets, using all the story beats of a moody noir. Twentysomething Tim (Justice Smith), drawn to the big city by his detective father’s death, teams with a feisty Pikachu, whose CGI-animated state looks like a bunny and a puppy were spliced with a Peep. Except, this isn’t your average Pikachu—it speaks with the voice of Ryan Reynolds, which only Tim can hear. Their new partnership is an uneasy one, as Tim, who once wanted to become a Pokémon trainer, has since given up on the idea. Joining the case is the plucky would-be reporter Lucy (Kathryn Newton), who believes she has crucial information about the murder of Tim’s father. Similar to Who Framed Roger Rabbit? (and dozens of film noirs), the plot leads to the detectives uncovering a cockamamie scheme hatched by the most obvious villain: the seemingly benevolent mastermind of the human-Pokémon balance, the wheelchair-bound Howard Clifford (Bill Nighy).

Letterman (who made 2015’s Goosebumps) abandons the noir conceit early on, however. Aside from an amusing interrogation of a Pokémon called Mr. Mime and the pointed use of shadows in the first third, each new clue in Tim and Pikachu’s investigation leads them to an elaborate special FX sequence—such as a chase in an abandoned lab, or the moment when entire mountains begin to rise up and collapse on one another. Meanwhile, Pokémon battles, which entail trainers forcing their adorable pets into one-on-one gladiatorial bouts, have been banned by Clifford. But they continue in a series of underground tournaments, an idea that underscores how these so-called battles are tantamount to illegal cockfighting. Watching such fights between computer-animated creatures, which are meant to look like members of a live-action world, exaggerates the innate cruelty of this kiddie fantasy. Curiously enough, the most visually engaging scenes of the film are not the eye-popping set pieces; rather, they’re the scenes of Tim and Pikachu walking on city streets populated with all manner of Pokémon activity in the background.

Moreover, whenever Pikachu speaks, viewers familiar with Reynolds will hear only the actor, not his character, to distracting effect. Reynolds also injects his personality into the role with Deadpool-brand quips that test the PG rating (Pikachu’s sarcastic remarks about testicles, serial killers, or someone turning him into a lampshade may give some parents pause). In any case, his inclusion is meant to invest adult viewers in the material, while the intricacies of the movie’s convoluted plot will escape most youngsters. Indeed, the ungainly titled Pokémon Detective Pikachu amounts to a lousy mystery and an even less involving relationship at the center, and it’s further marked by an unfortunate hollowness to the storytelling. It’s unfortunate because, even though it begins as a mystery, which is something relatively rare in family entertainment (aside from the occasional Zootopia, 2011), the movie offers a few nifty visuals and cute characters. But Pokémon Detective Pikachu ultimately exists to perpetuate the media empire, and to that end, it’s less interested in characters than in selling its brand to children.