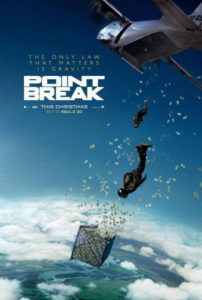 “Let’s do this, bro!” Those fateful words launch the daring dirtbike stunt, evidently sponsored by Monster Energy drinks both on and off-screen, in the opener of Point Break, a remake of the 1991 action cheeseball directed by Kathryn Bigelow. Some form of the overused line “Let’s do this” launches several X-Treme Sport stunts in the film, which replaces the original’s California surfer dude culture with millennial hipsters. Ericson Core serves double duties as director and cinematographer here, capturing impressive stunt choreography worthy of, well, a Monster Energy drink commercial. One-upping the original’s surfing and skydiving with wingsuit jumps, epic snowboarding, fight clubbing, and free climbing, the remake offers some neat stunts but remains burdened by a lifeless, vapid script by Kurt Wimmer. The result feels more like a two-hour commercial for X-Treme Sports than an action movie.

In their prime, Patrick Swayze and Keanu Reeves starred as the absurdly named Bodhi and Johnny Utah respectively, the former a surfer-turned-robber and the latter an undercover FBI agent. Both actors had several hits under their belt in 1991 (Swayze had Dirty Dancing and Ghost; Reeves had Bill & Ted’s Excellent Adventure), and the early bro-mantic tale was less about story than their combined celebrity, the mystique of surfing, and Bigelow’s capable action setpieces. The remake features Édgar Ramírez and Luke Bracey in the Bodhi and Johnny Utah roles. Ramírez has appeared mostly in small roles in big movies (Zero Dark Thirty, Joy), whereas Bracey is best known from the Australian soap opera Home and Away. But neither actor has clicked with audiences in any major way, and this remake won’t help their careers much.

Feeling responsible for a Cliffhanger-esque death in the prologue, Bracey’s Johnny joins the FBI under the supervision of Delro Lindo’s ball-busting supervisor. Johnny is assigned to catch a gang of seemingly Robin Hood-inspired thieves who used extreme athletics to rob from American corporations in Mexico and Mumbai, and then give back to the poor. Johnny quickly realizes the gang is set out to achieve the Ozaki Eight, a series of “ordeals” meant to honor and give back to Nature. Along with his crusty veteran partner (Ray Winstone, playing an unfunny, low-key version of the batshit crazy comic-relief role originated by Gary Busey), Bracey infiltrates a group of hard-partying hipster athletes in southwestern France. Heading up the group is Ramírez’s Bodhi; and though the bromance is strong between the two, the undercover agent forms a heterosexual romance with Bodhi’s lady friend Samsara (Teresa Palmer) as well.

As Johnny joins Bodhi to check various outlandish stunts off their Ozaki Eight list, most performed by real-life experts in each sport, the film globetrots from one exotic location to another: Austria, Australia, Paris, Switzerland, Venezuela, and so on. Meanwhile, Bodhi waxes philosophical about his eco-concerns, and the character’s overly heady motives reawaken the extreme athlete in Johnny, strengthening the bond between the two. For a time, Johnny even forgets that Bodhi is committing elaborate robberies to fund his search for “nirvana”. The basis of the film’s would-be tension involves whether Johnny will actually arrest Bodhi or not; however, that element is so grossly underplayed that it never takes hold. The lazy screenplay is more interested in providing a forum for extreme athletes to do their thing. And though the new film adopts its own philosophy over the original’s surfer culture, the remake is not without characters saying “radical” or flashing the “hang loose” sign.

Uncharismatic stars Ramírez and Bracey don’t capture the same energy and magnetism as Swayze and Reeves in their day, nor any energy whatsoever. Audiences suffered through the original’s endless undercover cop thriller clichés because its stars were so vital at the time—and Bigelow’s capable filmmaking makes it still watchable today. More about stunts than story, the remake leaps from one setup to another, unconcerned about notions of character or cohesiveness. Originally distributed by 20th Century Fox in 1991, Warner Bros. produced the remake in conjunction with DMG Entertainment, the Chinese company that contributed to the productions of Resident Evil: Afterlife and Iron Man 3. Filled with product placements from the aforementioned Monster Energy drinks to all the latest (and most expensive) X-Treme Sports gear, this is a largely commercial, transparent, pointless endeavor. Skip it, bro.