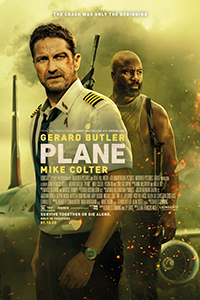 Gerard Butler is in the action movie business, and business is booming. After slow-mo kicking his way into the mainstream with Zack Snyder’s 300 in 2007, Butler gradually carved himself a niche. Although he used to appear in the occasional romantic comedy or even a respectable Shakespeare adaptation, the Scottish actor has spent the last decade saving presidents, protecting his onscreen families, and even stopping the occasional Geostorm. Most of his recent movies aren’t worth your time, though they tend to make money. Occasionally, crammed between Olympus Has Fallen sequels and his voicework in the How to Train Your Dragon series, Butler appears in something that genuinely impresses, such as Greenland (2020), an intense yet plausible end-of-the-world scenario. Plane marks another exception in his career, delivering a familiar story about a commercial flight emergency that turns into a violent hostage situation. But the conventional setup doesn’t distract from the capable direction by Jean-François Richet, helmer of 2008’s Mesrine movies, or the committed lead performances from Butler and Mike Colter.

British author Charles Cumming conceived and co-wrote the screenplay alongside J.P. Davis, who penned last year’s Chris Pine actioner The Contractor. The story follows a flight from Singapore to Hawaii. While veteran pilot Brodie Torrance (Butler) tries to overcome a storm thanks to some shoddy advice from air-traffic control, lightning strikes and knocks out the plane’s power, forcing Torrance to make an emergency landing somewhere in an island cluster near the Philippines. Torrence, his three-person flight crew (headed by Daniella Pineda), and the “New Year’s light” trip of fourteen passengers—including Louis Gaspare (Colter), a convict getting extradited on a years-old homicide rap—find themselves stranded, surrounded by miles of jungle. Before long, Torrence realizes they’re on Jolo, an island ruled by separatists and militias known for kidnapping outsiders for ransom. He resolves to find help, taking Gaspare along, given the convict’s experience in the French Foreign Legion. But soon, it becomes a fight for their lives against the locals.

The setup harkens to flight actioners from the 1990s, such as Executive Decision (1996) and 1997’s Air Force One, Con Air, and Turbulence. In each, the narrative is propelled not only by rat-tat-tat action and hostage drama but also by the plane’s eventual safe landing. Accordingly, Richet emphasizes the emergency landing and subsequent takeoff sequences as much as he does the machine-gun-centric middle. Richet and editor David Rosenbloom take their time establishing each sequence, never rushing through the movie’s early, measuredly-paced scenes. After the lightning, there’s a 10-minute countdown before Torrance and his co-pilot (Yoson An) lose control, forcing them to bring the plane down without help from their instruments. It’s a thrilling extended sequence that, unfortunately, I struggled to see. Cinematographer Brendan Galvin delivers the sequence in adequate lighting that borders on unintelligible. Granted, the filmmakers may have wanted the image barely visible to put us in the crew and passengers’ shoes—either that or the theater dimmed the projector in my press screening to save on costs, which I suspect is a contributing, and increasingly common, factor. 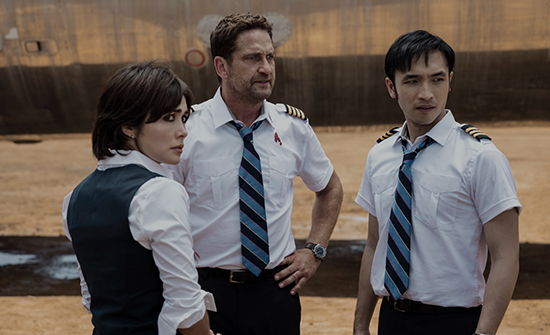 Equally dark scenes occur in the dramatic New York headquarters of Trailblazer Airlines, which looks less like a drab corporate office and more like a war room movie set. There, the airline owner (Paul Ben-Victor) enlists a no-nonsense fixer, Scarsdale (Tony Goldwyn), to help locate and rescue Torrance’s flight. Scarsdale, in turn, deploys a group of mercenaries since no government will claim authority over the rogue island. Much of this discussion establishes the dire situation that Torrance and Gaspare must navigate. Fortunately, their scenes unfold during the day that follows, under a scorching sun and inside a thick jungle. The production shot in Puerto Rico, and everyone looks hot, sweaty, and uncomfortable, as perhaps they should. Along with the setting, not a moment of Plane looks inauthentic. Richet handles the $50 million production with convincing CGI for the flight scenes and practical effects for the ground action, giving the movie a simple, almost throwback appeal.

Butler and Colter both make for engaging co-leads; though, I wish the latter had more to do. Gaspare reluctantly helps Torrance and remains self-interested, but he’s never antagonistic enough to become a full anti-hero. Instead, the character receives no more than a few lines of backstory and an open-ended story arc. Charismatic as Luke Cage in Netflix’s now-defunct Marvel shows, Colter has star power written all over him. Here’s hoping Plane is a building block to something more substantial. Elsewhere, Butler does his thing as a tough pilot. Although Torrance alludes to flying in the RAF and, there, probably learned to fire a machine gun, the screenplay wisely avoids turning the character into an ex-Special Forces hero thrust into an impossible situation. Torrance is simply a brave pilot, a widower with a daughter (Haleigh Hekking) waiting at home, and a professional with a dogged sense of responsibility to save his passengers. There’s not much need for gradation with these characters, partly because Butler and Colter have screen presence to spare, and Richet allows the situational dialogue and the actors’ committed performances to drive the story forward.

The stripped-down, unfussy storytelling makes Plane simplistic but entertaining—and refreshingly not contingent on the artificial spectacle that dominates today’s action movies. Even the plain title suggests as much. It could have been called “Full Throttle” or something else sensationalist, but, as the title indicates, Richet and his writers seem less interested in delivering corny gimmicks than a straightforward 107-minute survival thriller. Apart from my quibbles about the cinematography, Richet captures a memorable scene of brutal hand-to-hand combat, some shootouts reminiscent of the action in Call of Duty: Modern Warfare, and a couple of gasp-inducing blows with a sledgehammer. Plane is exceptional mainly for what it’s not—another bad action movie starring Gerard Butler. But it’s also notable for the coherence of its storytelling and lack of cheese factor, sparing the audience from cringey one-liners and cheap set pieces. All of these characteristics now seem like rarities in today’s lacking mid-budget action arena, making Plane feel refreshingly capable.