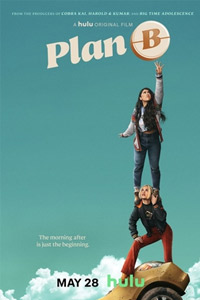 Plan B is about two teens on a desperate search for one morning-after pill. After Sunny (Kuhoo Verma) loses her virginity, she realizes that she fell asleep with a condom inside her body. She needs emergency contraception to avoid risking an unplanned pregnancy. And her more experienced best friend, Lupe (Victoria Moroles), helps her on the long and winding journey to acquire it. Working from a script by Prathi Srinivasan and Joshua Levy, Natalie Morales makes a confident directorial debut with a comedy whose energy and politics resemble both Booksmart (2019) and Unpregnant (2020). Morales’ freshman effort follows a well-worn path. These sort of high-school all-nighter coming-of-age teen comedies spring from the roots of American Graffiti (1973)—they all entail a few wild encounters, some life lessons learned, and bonds strengthened in the process. Although on the raunchier side and somewhat more dependent on shocks for laughs, Plan B manages to entertain; it has a point of view yet avoids becoming overly preachy.

Familiar though the high-school milieu may be, the movie establishes an endearing friendship and several hilarious situations for our two likable leads. Sunny starts her day by masturbating to an illustration of a naked man in an anatomy textbook. We wonder why she must resort to such desperate measures, but then we meet her fussy single mom (Jolly Abraham), who keeps Sunny repressed and dressed like a 12-year-old. Elsewhere, Lupe wakes up vaping before sitting down at the breakfast table in black lipstick and rebel attire, much to the disapproval of her father (Jacob Vargas), a pastor. On different wavelengths from their parents, the girls have a comically close and honest friendship, even if they have secrets from one another. Lupe assumes, for instance, that Sunny had sex with her crush—the “athletic librarian” named Hunter (Michael Provost), who plays floor hockey in a cardigan. Actually, her first time was with the gawky amateur magician Christian, Kyle (Mason Cook), who propped himself up on a Squatty Potty during the act. Lupe has secrets, too; she hasn’t yet come out to Sunny.

Sunny’s predicament wouldn’t mean much effort beyond going to her local pharmacy for the morning-after pill in most states. But Sunny and Lupe live in South Dakota, where pharmacists can invoke a “conscience clause,” which allows them to deny someone service based on their moral objections. And that’s just what happens when their pharmacist (Jay Chandrasekhar, from Super Troopers fame) turns them down, sending Sunny and Lupe on a three-hour road trip to the nearest Planned Parenthood in Rapid City. Despite the socially conscious material, the movie plays more like Superbad (2007) or Harold & Kumar Go to White Castle (2004), offering the occasional descent into sketch-comedy asides as the trip goes haywire. Take the weird pit stop where a gas station clerk (Edi Patterson, from HBO’s Vice Principals and The Righteous Gemstones)—who counts distance in “Mississippis”—recommends they buy a Plan B pill from a local drug dealer. When they meet the dealer, Andy (Moses Storm), the encounter leads to an extended full-frontal male nudity scene, and his pierced member (a rubber prosthetic) becomes an extended joke.

Plan B’s timing couldn’t be better. It debuted on Hulu just a few weeks after Texas passed its Heartbeat Bill, which makes abortions illegal after the six-week mark—before the point most women realize they’re pregnant. And this review comes just a few days after the resulting public protests, the most publicized remarks coming from Paxton Smith, an 18-year-old valedictorian of a Dallas high school who went off-script for her graduation speech. She interpreted the new bill and America’s tightening abortion legislation as “a war on my body and a war on my rights.” Plan B shows us that the war over women’s reproductive rights doesn’t have a single, sweeping battlefield. It’s a cold war in which one group gradually takes away women’s agency and limits the decisions they can make about their bodies. It maneuvers sneakily by forcing another Planned Parenthood location to close or giving curious powers to pharmaceutical technicians. And while these unconstitutional laws pacify the emotions of angered third parties, the war gets hotter every day.

Plan B puts these concerns into an accessible, relatable comedy that also confronts how the average 17-year-old might need to make a choice that could affect her life’s trajectory. At 108 minutes, it starts to feel a little long in the second half. Sunny and Lupe’s trip experiences several detours and the inevitable falling out that always happens in best friend movies. But a few minutes after shouting “You’re a shitty friend!” at one another, they’re back together on the road, closer than ever. Verma and Moroles are splendid as the two leads, even if their dynamic resembles Beanie Feldstein and Kaitlyn Dever in Booksmart. However, unlike Olivia Wilde’s direction of that movie, Morales allows the characters to live and breathe instead of turning their experiences into a music video (although there is some of that here). By comparison, Plan B is decidedly less stylish in formal terms, but it delivers these characters to their destination with plenty of laughs along the way.