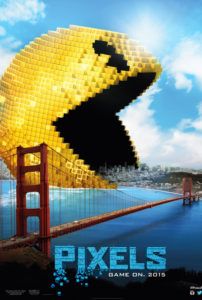 When Paul Blart is your buffoonish, pudgy President of the United States and Adam Sandler plays the hero as a mumbling Geek Squad technician, doubtful anyone will take your mashup of Independence Day, Ghostbusters, and Wreck-it-Ralph seriously. Not that anyone involved intended Pixels to be taken seriously. Based on Patrick Jean’s short film from 2010, where invaders from space adopt the form of 8-bit video games (such as Pac-Man, Tetris and, well, Space Invaders), this familiar nostalgia-saturated yarn relies on our 1980s throwback-obsessed culture to breed interest. First-generation gamers who spent adolescence in arcades, hovering over games of Donkey Kong the way today’s die-hard gamers strap on adult diapers, might appreciate Pixels as a novelty, but younger audiences may not get the joke. Still, director Chris Columbus offers enough formulized plot machinations that youngsters will probably remain distracted by the blocky special FX, dimwitted humor, and predictable degree of fun.

Opening in 1982 at the cusp of a world-championship arcade competition, we see 13-year-old Sam Brenner (Anthony Ippolito) just barely lose to Eddie “the Fire Blaster” Plant (Andrew Bambridge) in a Donkey Kong duel, a formative moment for Sam. When Sam, full of potential, grows up (now played by Sandler) to become a loser, he’s installing home entertainment systems and remains besties with his childhood friend Will Cooper (James), who also happens to be the POTUS. Fortunately for Will, whose low approval ratings put his political career in jeopardy, Sam knows just what he’s looking at when a curious attack at a U.S. military base seems familiar—he’s looking at patterns from Galaga. Along with their obnoxious pal, conspiracy theorist and world-class introvert Ludlow Lamonsoff (Josh Gad), they discover that aliens launched several attacks around the globe after intercepting a 1982 NASA time capsule containing footage of classic arcade games. Now the aliens want to have a game-off on Earth soil to determine which species rules the other’s planet.

Each attack takes the form of giant energy pixels designed to resemble a classic game, such as their encounter with Centipede on London soil. Sam and Ludlow begin to help by training Navy SEALs to defend Earth with energy weapons, but the soldiers don’t have their unique aptitude for pattern recognition. Before long, Sam and Ludlow become heroes known as the “Arcaders” and, along with energy guns and jumpsuits, cannot help but resemble the Ghostbusters. They’re also joined by Sam’s old nemesis, Eddie (now Peter Dinklage), whose overconfidence provides a couple of chuckles. At the same time, despite their success over the aliens in the first rounds of real-life arcades, the trigger-happy U.S. admiral (Brian Cox) and British commander (Sean Bean) would prefer brute force. And to break up the monotony of nerdy, out-of-shape white men battling the likes of Pac-Man, the story also includes Michelle Monahan as a cute military official and romantic interest for Sam. It all climaxes in a big Donkey Kong arena, where Sam proves he’s the real champion.

Sandler’s Happy Madison Productions purchased the rights back in 2010 to turn Jean’s short into a feature, and the long-in-development production finally started moving after several years, when Columbus’ 1492 Pictures (Naming your production company after an explorer and malicious tyrant Christopher Columbus? Not a good idea.) joined—bringing the director’s experience with special FX showcases like Harry Potter and the Sorcerer’s Stone and Percy Jackson & the Olympians. It should be noted that among the producer credits is Seth Gordon, himself a director of one of the best movies ever made about video games, The King of Kong: A Fistful of Quarters (2007). That film has more heart, laughs, excitement, and drama than Pixels, and what’s more, it’s a documentary. In fact, it’s easy to compare Sam and Eddie to The King of Kong‘s dueling arcade champions, niceguy Steve Weibe and mulleted jerk Billy Mitchell.

Screenwriters Timothy Dowling and longtime Sandler collaborator Tim Herlihy never venture away from the conventional, delivering a product that feels like another dumb Adam Sandler movie, just on a larger scale. By the time Q*bert shows up to evoke cutesy “Aww” reactions, the audience has had enough. The humor is juvenile and inane, the characters are unbelievable and over-the-top, and the overall temperament is childish. Indeed, the movie’s best joke implies a threesome between Dinklage, Serena Williams, and Martha Stewart. Outside of arcade memories, other moments of ’80s nostalgia produce a smile, such as altered videos of Hall & Oates, Madonna, and Max Headroom (voiced by Matt Frewer, no less). But the referential milieu hardly makes for an enjoyable movie. And regardless of the big budget (more than $90 million) and an ensemble of lowbrow comedians, Pixels takes Patrick Jean’s imaginative short and turns it into fare designed to entertain the lowest-common-denominator.