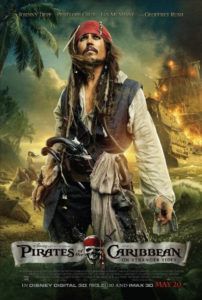 Pirates of the Caribbean: On Stranger Tides serves little purpose, except to dim (albeit temporarily) those pesky dollar signs glinting in the eyes of Walt Disney Pictures and producer Jerry Bruckheimer. Backers guarantee themselves big returns with an established crowd-pleasing series, a celebrity cast, and ridiculously budgeted special FX shot in underwhelming 3D. For the fourth entry, the original trilogy’s director Gore Verbinski has moved on to more ambitious projects (namely Rango) and handed the franchise’s reins to Rob Marshall (Nine). Regulars Keira Knightley and Orlando Bloom also abandoned ship, leaving Johnny Depp and Geoffrey Rush to command a whole roster of newcomers into the fray. But there’s more of commercial in this film than cinema, the entire project stinking of that ‘obligatory Hollywood sequel’ stench.

Attempting to make up for the plot-drenched quality of At World’s End, the new film arrives at a comparably brief running time of 2 hours and 17 minutes (only The Curse of the Black Pearl was shorter). But the end result is no less overstuffed than its immediate predecessor, complete with a fracas of characters scheming and double-crossing to get their hands on this sequel’s MacGuffin: the fountain of youth. Admittedly, the concept of Depp’s Captain Jack Sparrow seeking out immortality with a new franchise cast member, Ian McShane’s villainous Blackbeard the Pirate, on his tail sounds like a scenario ripe with potential. But franchise screenwriters Ted Elliot and Terry Rossio, who loosely based their tale on Tim Powers’ non-Disney-related novel On Stranger Tides, include an overabundance of characters and motivations that feel anything but leaner and more concise, and more like At World’s End than any fan of the franchise would have wanted.

The story begins in London, where Sparrow learns of a fraud using his name to recruit pirates. When he investigates, he finds his former lover Angelica (Penelope Cruz) in disguise; she eventually kidnaps him and brings him aboard the Queen Anne’s Revenge for her father, Blackbeard. Concerned by a prophesy which claims he will die at the hands of a one-legged man, Blackbeard, spearheading a crew of rogue pirates and brutish voodoo-type undead zombies, commissions Sparrow to locate the fountain of youth. Meanwhile, a conveniently one-legged Captain Barbossa (Rush) has given up pirate life to work for King George II (Richard Griffiths) as a privateer and find the fountain before Spain. This turn is somewhat tragic, as Rush has always given the most craggy, roughneck pirate performance of the series, and to see his pirate wings clipped plays against type to unsatisfying effect. Only in the finale, for a moment, do the wonderful stylings of this picaroon return.

To access the fountain, all competing parties require a mermaid’s tear, but these aren’t your typical Disney mermaids—they’re violent, deadly creatures with vampire-like teeth, who in turn are slaughtered in a disturbing scene and later tortured. Because Knightley and Bloom opted not to return, their characters’ arcs completed at the end of the original trilogy, the screenwriters have needlessly filled their places with an ineffectual love story between Sam Claflin’s heroic missionary and Astrid Berges-Frisbey’s captive mermaid. There’s something hilariously wrong about the quasi-beastiality pairing of a priest and a fish-lady, and it’s bound to raise some awkward hypothetical questions from younger viewers and adults alike.

While the last two sequels were ridden with gravitas, ironically this film suffers from Depp’s showy, flamboyant presence consuming screentime. In previous entries, Depp’s cartoonish performance was doled out in moderation, with straight-man Bloom providing some relief. Here, it’s all Depp, with barely a breather from his antics. Cruz fills her obligations as a fiery “Latin-blooded” heroine, but doesn’t standout. McShane all but sleeps through his performance, but then his Blackbeard wasn’t written with an immediate sense of danger about him. The sole player earning his pay is Rush, who, even within his pirate-ism truncated this time around, manages the most interesting subplot when Barbossa seeks revenge on Blackbeard for a predictable wrong. Of course, the actors cannot be blamed for the script, which offers few motivations for their characters.

Why does Jack Sparrow aspire to find the fountain of youth? I understand Blackbeard trying to cheat the prophesy of his death, Angelica trying to save her father’s soul, and Barbossa using the British Navy to find the fountain (and therein Blackbeard) as a means to his revenge. But what does Jack Sparrow have to gain? Herein resides the problem, as the wandering Jack was formerly comic relief to Bloom and Knightley’s characters in the previous entries. Making him the sole protagonist doesn’t work, as he’s ultimately just a buffoon. Consider the romance subplot between Jack and Angelica. Jack, all his wily and entertaining antics aside, hardly serves as a sex symbol, leaving the romance between his gender-bending-sexual-conundrum-of-a-character and Cruz’s intended “sexpot” to fall flat. This is a character for laughs and occasional moments of heroism amid his many absurdities, not for believable romance or weighty purpose. The writers have proven as much by failing to give Jack any meaningful motivation to find the fountain, which renders the whole story superfluous. But by the finale, when viewers find themselves asking why the writers pilfered the conclusion of Indiana Jones and the Last Crusade, these questions will not matter.

Marshall has never directed an adventure movie before and it shows. Repetitive swordfights are by-the-numbers conflicts no more involving than the arbitrary plot. Not even the expensive CGI delivers any memorable moments. No doubt On Stranger Tides will make oodles of dough, as mainstream audiences aren’t likely to balk at the lack of story when there’s 3D-infused escape worthy of a mindless summer blockbuster involved. If only there was cohesive storytelling that demanded even a single engaged brain cell, then I might be excited about Depp signing himself on to two more sequels. Instead, that news saddens me. How much longer must this franchise go on? Until Depp looks like Keith Richards? Regardless, you can be sure if Pirates movies keep earning profits, Disney and Bruckheimer will continue to produce them. But until the formula reaches beyond its theme park roots again, the experience will continue to be momentary entertainment—diverting, but instantly forgettable and bound to disappoint.