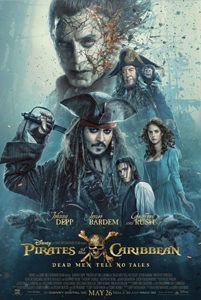 Back in 2003, Walt Disney Pictures released its first film based on their theme park ride “Pirates of the Caribbean,” originally launched in 1967 at Disneyland. The concept alone announced the studio’s purely commercial intent, but the resulting film, helmed by Gore Verbinski, contained a bizarro concoction of swashbuckling adventure, fantastical pirate mythology brought to life, and star Johnny Depp’s unconventional yet instantly iconic performance. Whatever was strange and exceptional about Pirates of the Caribbean: The Curse of the Black Pearl evaporated with the increasingly over-plotted, outlandish, and overlong sequels. And over the last fourteen years, the franchise has jealously maintained its brand to meet consumer expectations, leaving its strangeness to feel standard, Depp’s daring performance to feel like another in a long line of the actor’s living cartoons, and an intellectual property that reeks of being a product more than a series of films. Nothing much has changed with the six-years-later sequel, Pirates of the Caribbean: Dead Men Tell No Tales.

The franchise already delivered a belated and uninspired dud with director Rob Marshall’s On Stranger Tides from 2011, which came four years after At World’s End and set aside William Turner and Elizabeth Swan, major characters played by Orlando Bloom and Keira Knightley. Trying to reestablish the brand identity, Dead Men Tell No Tales returns to the basic setup of the original film, which found Sparrow to be a superfluous component in a scenario involving pirate curses, unspoken love, and mysterious family ties. Such elements drive the new film, written by Jeff Nathanson, while new characters of familiar lineage offer their young faces for the floating-head movie poster. Henry Turner (Brenton Thwaites, from Gods of Egypt), son of Turner and Swan, and science-obsessed orphan Carina (Kaya Scodelario. The Maze Runner) have no romantic chemistry. No matter, as they’re largely present to play the straight-arrows opposite Depp’s boozy rapscallion.

Of course, there’s an elaborate set of circumstances involving yet another curse, this one condemning Captain Salazar (Javier Bardem), a Spanish pirate-killer thwarted by Sparrow long ago, to an existence of undead misery in the Devil’s Triangle. Salazar wants revenge on Sparrow, and to stop Salazar requires a MacGuffin in the form of Poseidon’s Trident. Along the way, Sparrow teams with Henry, Carina, and his old nemesis Captain Barbossa (Geoffrey Rush, superb as always). Several double-crosses saturate the more-than-two-hour runtime, as each character has their own reasons for teaming with a blackguard like Sparrow and wanting the Trident. Meanwhile, the proceedings come ornamented with diverting action set-pieces, from an opening bank robbery (that curiously combines moments from The Jerk and Fast Five) to an encounter with zombie sharks.

Co-directors Joachim Rønning and Espen Sandberg, who nabbed the job after their superb 2012 version of Kon-Tiki, deliver a bauble. It’s serviceable, watchable, and hardly offers anything new, but it also isn’t a complete mess. An effective subplot involving Barbossa’s progeny might even tug a heartstring (but just one), while a cameo by Paul McCartney as Sparrow’s uncle proves short and more pleasant than Keith Richards’ tired, embarrassing appearance in At World’s End (after all, McCartney still has a crackling wit and deadpan sense of humor). Not every role can be unexpectedly welcome. Somehow the franchise has never learned that Depp’s performance as a drunken pervert is best delivered in small doses; he’s a buffoon, the comic relief, and any hope for a meaningful or engaging arc fades as the viewer grows tired of his predictable shenanigans. The whole Captain Jack Sparrow routine has become tiresome, and what once felt like a rebellious and risky performance now feels like a commercial—as most Depp performances do in recent years.

Worst of all, Dead Men Tell No Tales offers none of the downright bonkers ideas that Verbinski brought to the franchise. Verbinski’s often surreal ideas sometimes proved too conceptual for a blockbuster and bloated the runtimes of his films, but their ambitious imagination delivered the unpredictable and random. Alas, there’s nothing unexpected or very imaginative about the treatment by Rønning and Sandberg, two otherwise talented filmmakers whose skill seems to have been consumed by Disney’s overriding goal of brand cohesion. Mission accomplished, as Dead Men Tell No Tales is very much another sequel in the Pirates of the Caribbean franchise and all that such a label entails both formally and narratively. Audiences who hold the series dear will probably find themselves entertained. Beyond that, there’s not much point to further critical assessment aside from stating the obvious: this is an unnecessary film that delivers exactly what the audience expects in the most uninteresting ways.