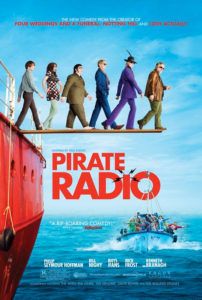 In the 1960s, ships like Radio Caroline and the M.V. Mi Amigo, anchored just outside British territory in international waters, broadcast rock ‘n’ roll to millions of listeners in the United Kingdom who could not get such pop culture from the BBC’s land-based radio stations. Everyone from The Beatles to The Rolling Stones to The Who could be heard, much to the dismay of the British government, who in 1967 passed the Marine Broadcasting Offences Act. This law made it illegal to transmit offshore to the mainland. The music continued, however, as these rebel ships moved and found legal loopholes to fight the system in the true spirit of rock ‘n’ roll.

But Pirate Radio isn’t about that, at least not exactly. The pseudo-historical comedy, written and directed by Richard Curtis, skews history to present a waterlogged rock music Slobs vs. Snobs tale. The boat in the film, called Radio Rock, wasn’t an actual boat and none of the DJs on board were actual talents. The concept was based on historical fact, but it takes liberties with the details. Audiences in the United States are getting even less of the story, since Curtis’ film, called The Boat That Rocked in the UK, was edited down from its original version by some twenty minutes due to poor reception from British critics. Curtis had wanted to release a three-hour version, but it’s doubtful any audience will ever see that cut.

Much as he did with his scripts for Four Weddings and Funeral and Love Actually, Curtis manages an ensemble cast and gives everyone their due. Aboard the boat are a motley crew of longhairs and layabouts dedicated to purveying the sweet sounds of rock, most of them played by superb actors. The great Philip Seymour Hoffman is The Count, a famous jockey imported from America who treats the music like it’s high art. Nick Frost, from Shaun of the Dead and Hot Fuzz, plays Dr. Dave, a chunky heartbreaker. Flight of the Concords star Rhys Darby plays the New Zealander Angus, the DJ that no one seems to like. Rhys Ifans is the resident shock jock who keeps listeners by unzipping his pants and whispering dirty little nothings into the microphone. And Bill Nighy is Quentin, the station’s manager. Oh, and there’s no women allowed onboard, except the lesbian cook Felicity (Katherine Parkinson).

The story begins when Quentin’s godson, a young reject named Carl (Tom Sturridge), arrives on the ship by order of his mother (Emma Thompson), becoming exposed to sex, drugs, and great music. On shore, Parliment decrees Radio Rock to be an immoral enemy of the state, and they place the stuffy Sir Alistair Dormandy (Kenneth Branagh) in charge of shutting them down. Dormandy’s right-hand man, aptly named Twatt (Jack Davenport), begins by cutting their funding by making it illegal for British businesses to sponsor offshore radio stations. But the companies circumvent that by paying Radio Rock through other countries. Some ninety percent of the UK population tunes in each night, after all, so suddenly losing millions of listeners isn’t an option. To be sure, Darmandy and Twatt find a way to make the broadcasts criminal, and the controversial gang of broadcasting revolutionaries keeps doing its thing regardless.

The real star, of course, is the film’s soundtrack. Aside from the conspicuous lack of songs from The Beatles, which no doubt stems from the pricey rights to their music library, the soundtrack will make a wonderful introduction to British rock for the young rebel in your family. Curtis includes many a subplot to mirror what’s happening in the story, hence songs like “Elenore” to reflect a character of the same name. There’s plenty from The Kinks and The Turtles, along with standard classics from The Who. The soundtrack is offered in stores, so have a go, or simply log on to stream any of the dozens of online stations available through iTunes or other sources. There are thousands of independent classic rock stations out there, and this film will have you searching for one that suits you.

Curtis’ film is light and funny, though it doesn’t so much achieve any historical name and date accuracy as it does the feeling of an era. We take for granted today how powerful rock ‘n’ roll was upon its arrival, as nowadays it’s anything goes for music and broadcasting. Pirate Radio is a film about the beginning of an age, and it captures that energy quite well. The plot may be treated in perhaps too fluffy a manner, but it’s an enjoyable experience, even if it was chopped and abbreviated by the distributor. The cast is comprised of hilarious performers, and they make up for Curtis under-developing their characters by imbuing them with enough personality to make them all charming. And even if there’s not much structure to the story beyond “Animal House on the high seas,” the ’60s soundtrack and the rollicking laughs will keep you entertained.