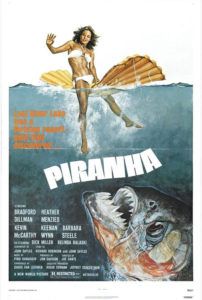 Through the 1970s and spilling over into the subsequent decade, Roger Corman’s production company New World Pictures released little more than schlock and exploitation, everything from Death Race 2000 to Women in Cages. Most of them prove unwatchable today, unless done so with an eye for irony. Exempt from that list is Corman’s production of director Joe Dante’s Piranha from 1978, an unabashed derivation from Steven Spielberg’s blockbuster Jaws from three years earlier, but a good one. Being Dante’s first feature film, the result shows all the promise of a burgeoning young genre director, allowing this when-animals-attack horror movie to stand up surprisingly well today.

Crafted with love by the crew, each of the main players comes from a background of B-movies and genre enthusiasm, and most would go on to make bigger names for themselves elsewhere. Dante had been a writer for the horror and sci-fi magazine Castle of Frankenstein before co-directing Hollywood Boulevard in 1976, a Corman spoof where a Midwestern girl becomes an exploitation film actress. John Sayles, who would later become a major independent filmmaker, gave his script a sharp sense of humor. The makeup crew boasted names like Rob Bottin and Phil Tippett, who would later construct the creature effects in everything from The Empire Strikes Back to John Carpenter’s The Thing. Together, the crew made their low-budget horror elements look skilled, their minuscule sets feel extensive, and their meager budget seem considerable.

Bradford Dillman, a notable actor arguably grades above your typical Corman production, was cast in the leading role of Paul Grogan, a leathery mountain man cooling down after his divorce in the comfort of a bottle. He’s convinced by plucky skiptracer Maggie McKeown (Heather Menzies) to help find two lost hikers somewhere on his mountain. Grogan figures they probably went up near the old abandoned military research facility, which is the first place anyone should look when people disappear. There, they find cracked scientist Dr. Hoak (Kevin McCarthy, who does paranoid better than anybody) and his laboratory of stop-motion animated fish creatures. Assuming the worst, they drain Hoak’s live well hoping to find the dead bodies of the hikers, but instead, they release a school of genetically engineered, super-intelligent piranha into the mountain’s system of lakes and streams. Whoops.

Together, the three of them hop on Grogan’s Huckleberry Finn-style raft and float downstream to warn the heavily populated settlements on the riverside. On the way, they find the remains of the mountain’s resident old coot, Jack (Keenan Wynn), whose feet became fish food and were left nothing more than bloody skeletons. Hoak’s worst fears have come true; what’s more, his fish have been specially designed to flourish in both freshwater and saltwater, and if they reach the ocean, we’re all doomed! The stakes are even higher than that, as Grogan’s daughter is at risk in the nearby summer camp, and it’s run by a dogmatic counselor (Paul Bartel, from Dawn of the Dead) bent on making the aquaphobic Grogan girl earn her swimmer’s badge (dun Dun DUN!). Luckily, she hides under a canoe and watches as the camp’s children and staff become the main course of a feeding frenzy. 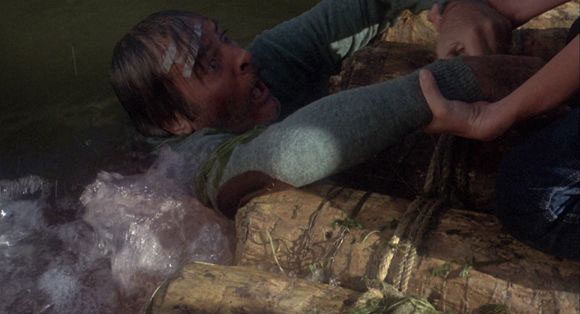 The movie’s lacking in originality may be problematic for devotees to Jaws, but Dante’s tongue-in-cheek tone continually finds ways of differentiating his production. And yet, in some respects, the plot and even productions are identical. Both Dante and Spielberg were forced to conceal the appearances of their killer fish for lack of budget, using underwater shadows and other formal tricks to simulate their monsters’ appearances. Both films begin with two flirty swimmers disrobing before they become fish food. Both feature a pig-headed politician (here played by Dante favorite Dick Miller) who refuses to shut down the beach, despite warnings of a deadly attack. Of course, both beaches turn into bloodbaths. And both end with a one-on-one showdown between fish and hero, though Piranha is decidedly less optimistic than Spielberg’s film, refreshingly so.

There’s also a science-fiction element to Piranha, whereas Jaws simply spins a yarn about Nature-gone-bad. Up at the abandoned military facility, Dr. Hoak tinkered away with an abandoned Vietnam War project called “Operation: Razorteeth”. Subtle. The program’s commanding officer, Colonel Waxman (Bruce Gordon), and chilly researcher Dr. Mengers (Barbara Steele), arrive on the mountain to secure the situation, using poisons and misinformation to stop the spread of both piranha and hysteria. Alas, neither work, and in the last scene, Italian horror vixen Steele utters into the camera “There’s nothing left to fear.” If only she knew that Piranha II: The Spawning would be forced upon the world four years later, she’d realize that there was plenty to fear.

The Saturn Awards praised Dante’s work when they named it the best horror movie of that year. And though Universal Studios planned to defend Jaws’ honor by prepping a lawsuit against New World, Spielberg saw Dante’s release and famously gave his endorsement. A lawsuit could have been the end of Dante and possibly New World, but because Spielberg was flattered rather than offended, Dante went on to make The Howling, Innerspace, and The Burbs, earning a name for himself in the 1980s horror-comedy scene. In addition to Spielberg’s stamp of approval, Dante was later hired to direct Gremlins and a segment from The Twilight Zone: The Movie for Spielberg’s production company Amblin Entertainment, proving he bore no grudges. Though Dante has all but disappeared from the mainstream in recent years, his cult status endures, along with the occasional gem like The Hole or Burying the Ex.

Formulaic and representative of a number of Jaws rip-offs—which include, but are not limited to Great White, Monster Shark, Orca, and Tentacles—Piranha goes beyond its potential carbon-copy limitation and resolves to be a confident piece of genre B-moviemaking. From its technical prowess to the talented cast of actors, the movie feels far superior to conventional New World productions, and even avoids much of the otherwise obligatory sex standard to Corman fare. Dante’s talented, sure hands assemble a fun little horror-thriller that deserves to be seen as more than just a post-Spielberg rehash, but a winking and skilled thriller in the summer escapism style.