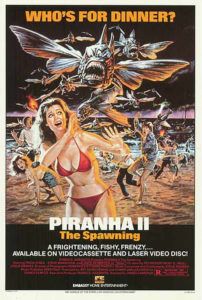 There’s something curious happening in Piranha II: The Spawning, a disgraceful piece of schlock from 1982 whose only redeeming factors are that it boasts James Cameron’s first directing credit and an early acting role by Lance Henriksen. Cameron remains adamant that he did not direct the majority of this sequel to 1978’s Roger Corman production Piranha, helmed by Joe Dante, rather that Italian producer Ovidio G. Assonitis took over the shoot shortly after filming began. Cameron supposedly attempted to regain control, but Assonitis finished the movie himself and left Cameron’s name under ‘directed by’ in the credits. And yet, despite Cameron’s lack of involvement, the sequel oddly contains no end of the director’s tropes.

It may be that Cameron wrote the script under the credited pseudonym H.A. Milton, but that he never really had control over Assonitis’ production and was refused any decision-making power. It may be that Cameron wasn’t allowed to edit the footage, so he was forced to break into the editing room and cut his own version, which was subsequently re-cut by Assontitis. Such things cannot be confirmed, and Cameron dances around the subject in interviews. What is known is that the sequel was filmed in the Grand Caymans and Rome with largely non-English-speaking Italian actors, that there was enough on-set crisis to bestow the movie a notorious reputation, and that Cameron considers his first true effort as a director to be The Terminator from 1984.

The story takes place in the Caribbean, at Club Elysium, a resort spot whose popular grunion spawning festival is approaching. As explained by scuba instructor Anne Kimbrough (Tricia O’Neil), each year on the Spring Equinox, grunions crawl ashore to spawn, and drunken tourists walk down to the beach to greet them. More on that later. Anne and son Chris (Ricky G. Paull) live together at the resort hotel during her separation from her husband, the local police authority Steve (Lance Henriksen). As a result, their weirdly close mother-son relationship resembles something out of Louis Malle’s Murmur of the Heart.

Anyway, when her class dives to investigate a recently sunken freighter, Anne discovers one of her rookie divers has disappeared; she goes looking for him and finds his shredded corpse chomped to bits inside the ship. Being the instructor of the class, she’s held responsible for the victim’s death by her badgering husband. Luckily, she has irritating pretty boy Tyler (Steve Marachuk) on her side, and he all but forces her into bed with his incessant charms. On their first date, however, she takes him to the morgue to examine the body of the victim, which was evidently ravaged by something unlike anything she’s ever seen before. In this case, the culprit is a mutated flying fish that looks like gremlins with gills.

By the time the carnage picks up in the third act, not even extreme blood splattering and corny fish-monster effects can make up for the inanity that came before it. Anne, Steve, and Tyler rush to stop the deadly flying fish, which, as they discover, originated from the sunken freighter. But just then the grunion festival gets underway; the vacationers collectively approach the shoreline, chanting “We want fish!” as the ocean’s water bubbles with activity. And fish they get—angry, winged creatures that fly via clear filament line toward the jugular like a great white shark at a baby seal. It all ends when our heroes dive and plant a bomb on the sunken freighter dwelling of the deadly sea creatures, promising the world that, with any luck, we’ll never be forced to endure another flying fish movie ever again.

Cameron’s enduring obsessions populate the story, however lame it may be thanks to Assonitis. Since The Abyss in 1989, underwater photography, the claustrophobia inherent to submerged structures, and the mysteries of the deep have settled in the director’s output. The trend culminated with Titanic and Cameron’s subsequent documentaries Ghosts of the Abyss and Aliens of the Deep. He’s even noted that the sequel to Avatar, his second ‘biggest blockbuster ever’, will involve the underwater world of Pandorum. So for Piranha II to contain these underwater themes hardly feels like a coincidence, and as much as Cameron doesn’t want to admit it, this first screen credit as a director shows the first evidence of his reoccurring themes as a filmmaker.

Cameron was right when he said that Piranha II stands as “the finest flying piranha movie ever made”, by default only of course. Should another filmmaker attempt a horror movie with flying fish for its monsters, it’s hard to imagine the result being worse than this (SyFy Channel, do your worst). The movie reaches a level of awfulness that almost prevents recommending it even as an ironic viewing with friends; it deserves to be mocked, but it’s also mind-numbingly terrible. Approach at your own risk. Cameron’s career would go on to provide monumental blockbusters, one after another, so it’s one of the great historical ironies that the director of Titanic and Avatar would begin his directorial career (understanding that he can only be attributed to the final product in partial terms) on such a low note.