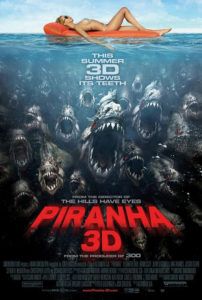 It’s spring break at Arizona’s Lake Victoria, and local Sheriff Forester (Elisabeth Shue) must contend with a few thousand drunken college goons. Little does Forester know that a recent earthquake opened up an ancient underwater lake housing schools of prehistoric piranha, who have survived for millions of years by cannibalism but now have access to some yummy new human treats. Surprisingly, there’s no mayor to tell Forester not to shut down the lake for their peak season when the first signs of danger appear. When a team of seismologists, headed by hero Novak (Adam Scott), is attacked by the piranha, her worst fears are confirmed. Meanwhile, her teenage son Jake (Steven R. McQueen, grandson of Steve McQueen) is convinced to be the lake guide for seedy pornographer Derrick Jones (Jerry O’Connell, playing a loathsome riff on Girls Gone Wild creator Joe Francis), who proceeds to shoot a softcore porn movie on the deck of his boat. Gee, do you think the Sheriff will have to save her son, at which point she’ll catch him philandering with pornographers, when he should have been at home babysitting his little brother and sister?

But it’s all meant in the spirit of schlocky entertainment value. At least, that’s how Aja wants his audience to feel. You’re not expected to take the experience, nor the story, seriously, which is fine. Some horror doesn’t want to be taken seriously, just provide a good time. Aja resolves to do this through an abundance of boobs and blood, more of both than you’re probably used to, and both fake—the piranha are rendered through substandard computer effects, and the majority of topless porno stars have breast implants. But his approach is so over-the-top that it makes you appreciate the subtlety of movies like My Bloody Valentine. The story doesn’t advance through plot development as much as boob development, and those who walk away from this movie thoroughly entertained need a girlfriend, badly.

Piranha-based kills get increasingly more graphic as the movie’s nudity does, and with each new step Aja seems to dare himself to take it further. Dancing college girls shake their bottoms in the camera, and thus the viewer’s face. A school of piranha spins around a victim and slowly takes bites until there’s nothing left. Jake does body shots off of Kelly (Jessica Szohr), his would-be sweatheart, as the “boobies”-minded Derrick Jones records it. A female victim’s hair is caught in a propeller, and as the boat’s driver starts the engine, it pulls her face off. The culmination of both the sexual and violent content comes simultaneously when a beach crowd turns into a feeding frenzy, while on the other side of the lake two nude porn stars have an extended underwater dance like lesbian mermaids. By the time the penis of O’Connell’s character is floating before us in lousy 3D, only to be swallowed and then coughed-up by a piranha, we’ve seen so much blood and so many boobs that penis gore doesn’t seem out of the ordinary.

In terms of casting, Aja must be commended. He somehow convinced Richard Dreyfuss to appear in the movie’s opening Jaws homage as a fisherman singing “Show Me the Way to Go Home”, a shameless but amusing cameo. Christopher Lloyd appears as the town’s resident scientist, who just-so-happens to have a fossilized version of a prehistoric piranha in his office, the perfect prop when explaining the primeval origins of the monsters to the townsfolk. Playing Doc in the Back to the Future films has made Lloyd ideal for explaining absurdly complicated scientific ideas with a sense of energy and purpose. Shue plays her sheriff role without a hint of humor; Ving Rhames is her “I’m too old for this shit”-saying deputy; Eli Roth (director of Hostel) shows up as a wet t-shirt contest announcer… No, it’s not just you, the names and faces do get less interesting as the list goes on.

The result feels incomplete, and not just because of the (expected) plot holes. One character, a porn cameraman played by Paul Scheer, completely disappears without explanation as to where he went. He was on a boat with five other characters. We learn what happens to the other five but not him. We can only assume he died, though the movie never shows us or even mentions him again. The character just vanishes. Aja has admitted in interviews during the movie’s publicity campaign that Scheer’s death scenes were filmed, but the effects were too expensive to complete. It’s that kind of impractical and haphazard filmmaking that audiences must contend with from beginning to end.

And speaking of the end, the final moments reveal a plot twist (which won’t be spoiled here) that feels like a transition into the third act; instead of exploring that twist, however, the movie just ends abruptly (in a scene shown in the trailers, no less). Perhaps the twist is meant to indicate a coming sequel of this remake of a ripoff. After only a brisk 82-minute runtime, however, the audience is bound to feel robbed at this moment. Maybe Aja and his writers Pete Goldfinger and Josh Stolberg wrote a third act but ran out of funds from their small $25 million budget, just as they did with Scheer’s death scene. Could this sloppy storytelling just be a case of bad accounting?

This is another of those post-converted 3D movies that you’ve been warned about, shot in 2D but then adapted with a third dimension in the post-production process. Sadly, since the filmmakers committed themselves to the title Piranha 3D, no theaters will be offering a 2D option, so wait until home video if you must watch. Resulting from this are technical bungles that will distract any viewer, including issues with layering and depth that give the movie a sloppy look. Bloody and choppily-cut underwater scenes would be near unintelligible even without the gimmicky effect; with it, they’re an incoherent mess. Aja seems to think that CGI will fix everything, whereas Dante’s original simply used foam fish-molds-on-a-stick and it looked better than this.

It takes a lot to stomach the outright way in which Aja made Piranha 3D about boobs and blood, yet the approach is understandable, in that both sex and violence sell. Perhaps Aja is making a potent statement about entertainment today by shoving excesses of sex and violence down our throats. Perhaps not. Aja has taken a turn for the worse here, as the usually serious-minded horror director has turned “horror fun” into something sleazier than it needed to be. Take away the preoccupation with boob close-ups, and the movie is kind of fun. After all, there’s always going to be a little sex in a movie about piranha attacking a bikini beach hot spot. But there’s a point where a movie ceases to be a movie and instead chooses to be an expression of nothing more than softcore tantalization, and Aja has passed that point.