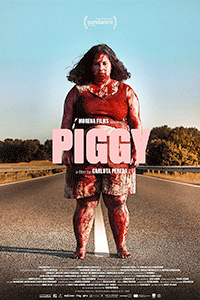 In Carlota Pereda’s haunting short film “Piggy” from 2018, Laura Galán plays Sara, a victim of cruel teen bullying by girls her age. The short finds Sara arriving at a public pool in her remote Spanish town, relieved to discover that, at first glance, no one’s around. Embarrassed about her weight, she doesn’t want to be seen in her two-piece swimsuit. But as soon as she approaches the pool, her safe solitude is broken. A creepy stranger emerges from the pool, but he soon leaves Sara to three mean girls, who mock her, call her cruel names, and use a skimmer to hold her under and nearly drown her. Then they take her clothes, towel, and bag, and they run off, forcing the devastated Sara to walk home in her swimsuit. On the road, she’s mocked and assaulted again by some random passers-by, so she takes a side road to avoid being seen. There, Sara is spotted by the stranger from the pool, who suddenly stops his eerie van. In the back, she hears screams and sees the bloody hand prints of her bullies. Sara shares a loaded expression of recognition with the driver, an apparent psycho killer, that chillingly suggests she will keep quiet while he disposes of her bullies. In this grim punch line, the bullies receive a savage comeuppance.

Pereda’s feature-length expansion contains replicated scenes from her 13-minute short film, albeit with horrific details added and a slightly tuned-up emotional pitch. The writer-director begins Piggy from a purely psychological standpoint, channeling Catherine Breillat’s Fat Girl (2001). Gradually, the situation turns psychosexual before slipping into an eventual gorefest—a dynamic worthy of Tobe Hooper’s The Texas Chainsaw Massacre Part 2 (1986). But refreshingly, Pereda never sacrifices her commentary on bullying or morality in favor of a bloody genre exercise. Instead, she explores the complex subjectivity of her protagonist (once again played by Galán), whose home life is no better than her experiences at the pool. The daughter of a butcher (Julián Valcárcel) who runs the family carnicería, and a shrewish mother, Asun (Carmen Machi), who runs their house, Sara is the object of ridicule and humiliation. In one of the opening scenes, the mean girls snap a photo of Sara and her parents to post on social media with the caption “Three Little Pigs.” Her parents have no idea what’s happening, and Sara is too ashamed to say anything.

Pereda makes Sara’s experience at the pool even more excruciating and terrifying in Piggy by giving some gradation to her bullies. One of them, Claudia (Irene Ferreiro), had a previous friendship with Sara, so her behavior in the film represents a betrayal. But any hesitation she might feel about tormenting Sara dissolves in the presence of her two despicable friends, Roci (Camille Aguilar) and the head instigator, Maca (Claudia Salas). Best of all, the new version of the scene plays with a greater sense of Hitchcockian dread after Sara submerges herself and fails to notice a tied-up corpse at the bottom of the pool. Later, when Sara returns home after seeing the stranger—Richard Holmes, credited as El desconocido (unknown man)—she keeps quiet about what she saw. It’s her secret, even after the authorities investigate the dead body in the pool and suspect that Sara, who claims to know nothing, has more information than she discloses. 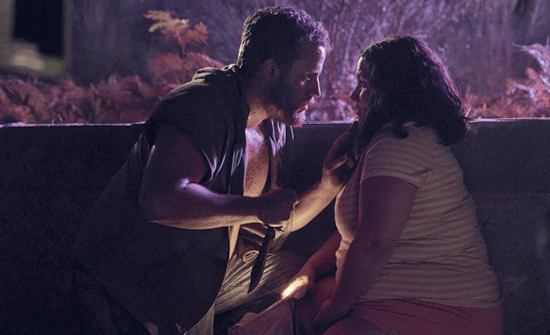 Drawing from her experiences as a bullied teen, Pereda understands the reaction of wishing the bullies away, preferably with the help of harsh poetic justice. Yet, despite the killer angle that propels the story forward, most of the film follows Sara. Pereda shows how everyone around Sara assigns her cruel names such as “Miss Bacon” or “Pork Belly,” or they remark on her unhealthy diet. Even her mean little brother (who resembles Enzo Staiola, Bruno from 1948’s Bicycle Thieves) snorts at her. And while Machi is excellent as the mother who protects Sara from the police and the other parents of the missing girls, Asun’s nasty insults and unloving behavior prove cruel. The painful-to-watch scenes of Sara’s taunting are brought to life by Galán’s terrific, wounded, frustrated, and angry performance. Her trauma becomes palpable when she’s racing away from the two men in a car who grab Sara in her bikini and lift her, causing her straps to untie. Her humiliation is overwhelming. So when Sara thinks about her doomed classmates and whispers, “Fuck them,” it’s not without some empathy from the viewer.

Piggy goes further to test the limits of Sara’s desire for revenge when the killer begins following her, leaving her snack cakes and eventually making contact (as the meme goes, find someone who looks at you the way he looks at Sara). The stranger sympathizes with her and, in doing so, represents one of the only characters who shows Sara any kindness. Is this her savior? Will they become lovers on the run in the tradition of Natural Born Killers (1994), traveling the Spanish countryside on a murder spree? Or will Piggy follow the same path as Carrie (1976), as the poster suggests? Galán is superb at conveying Sara’s inner conflict, torn between her hatred of her bullies, her attraction to the stranger, and her guilt over whatever he’s doing to them. Pereda maintains a delicate balance by preserving the audience’s empathy for Sara yet never revealing before the bloody finale which way Sara will turn. Ultimately, the ending clarifies questions about their will-they-or-won’t-they connection, even as the film’s nimble teeter-tottering between social commentary and arch horror never tips too far in either direction.

Shot on location in Villanueva de la Vera, in Extremadura, a region that shares a border with Portugal, Piggy looks dusty and sundrenched. The heat means Pereda puts bodies on display, from Sara at the pool to her father and brother sitting shirtless at the dinner table, hunching over plates of cooked animal flesh. The physical reality and acceptance of body types are part of Pereda’s aesthetic and not always in bullying or horror contexts. The director also manages comic scenes where Sara attempts to sneak around the house, but her mother catches her, resulting in quietly funny and awkward moments. Director of photography Rita Noriega shoots in the boxy Academy ratio, capturing sweaty and claustrophobic scenes. Noriega’s use of the 1.33:1 frame evokes Sara’s small village and its narrow worldview about difference, further underscored by their unreliable authorities and dubious cell signals. But it’s also a place that Sara might never escape.

Piggy brings to mind elements of Julia Ducournau’s Raw (2016): both films involve young women who struggle with being outsiders and find solace in aberrant behaviors. While Pereda doesn’t go as far as Raw—or Ducournau’s Titane (2020), a similar blend of horror with themes of empathy for nonnormative identities—her film confronts how bullying someone who’s different or an outsider becomes a monstrous social act of enforcing so-called normalcy, and thus how damaging the concept of normality can be. Pereda’s use of a slasher scenario even frames the taunts as somehow worse and more disturbing than the gristly, shocking finale. When Sara finally emerges, drenched in blood and dirt, Galán (36, convincingly playing a teen) is able to express her character’s growth from someone crippled by her self-image, shame, and social anxiety, into someone liberated by her anger and blood-soaked confrontation. It’s a stunning performance and transformation in an artful film, which is both a suspenseful slasher and an entrenched character study with a moral message.