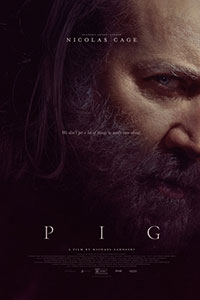 Robin Feld lives with his truffle pig deep in the Oregonian wilderness. He has no water heater or shower, just a nearby stream. His business partner delivers supplies in exchange for truffles, which his pet pig forages and his partner sells in the city’s competitive high-cuisine marketplace. His existence is quiet and solitary, his time filled by cooking elaborate meals, such as a rustic mushroom tart in his cast-iron skillet, and sharing it with his snouted companion. The first words we hear him speak are “I’m okay,” a sign of self-reassurance that indicates something has driven Robin to live in these conditions for the last 15 years. However, his reclusive lifestyle comes to an abrupt end when someone beats him unconscious and steals his animal, inciting a dogged search in Portland’s restauranteur underground. Mysterious and rather profound, Pig stars Nicolas Cage as Robin, and it’s the feature debut of co-writer and director Michael Sarnoski. Based on its setup and star, you might form some preconceptions about the narrative’s trajectory and the film’s tone, and this review will explore them in detail. Though, Pig should be experienced without knowing where it’s going. Consider seeing the film before you continue reading, knowing only that it features Cage’s best performance in years and leaves a powerful mark on the viewer.

Pig takes place in the cutthroat world of truffle hunting, where sometimes ruthless people scheme to get this earthy ingredient, worth thousands of dollars per pound, into the best restaurants. Historically, people have used female pigs to seek out truffles; the fungus’ scent naturally draws them since it resembles a male pig’s mating pheromones. But in recent decades, truffle foragers switched to dogs since pigs tend to eat the luxury Tuber and damage their growing conditions. Dogs learn to sniff out truffles without risk to the crop, and a well-trained foraging animal becomes a valuable tool for foragers or a threat to competitors. Sadly, rivals steal or even poison a staggering number of truffle dogs every year. The 2019 book The Truffle Underground and last year’s documentary The Truffle Hunters detail a wild and vicious marketplace, located predominantly in Europe, where black-truffle farmers, white-truffle foragers, and truffle bandits compete in a high-stakes industry. Sarnoski’s film takes place on the edges of Oregon’s less volatile truffle and foodie scene, but that’s just the backdrop of this soul-searching work. 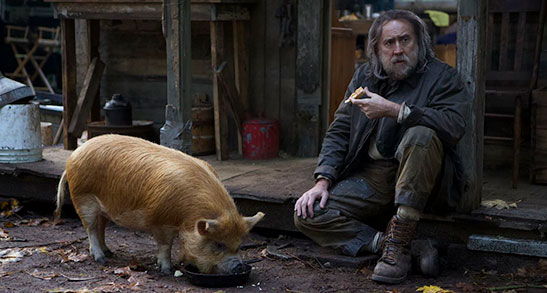 Robin subsists on the margins of the truffle marketplace, using Amir (Alex Wolff) to sell what he and his pig collect. A young hotshot with an expensive watch and flashy car, Amir lives in the shadow of his father, a well-connected and ruthless truffle seller. When Robin sets out to recover his pig, he needs Amir to drive him; though, their relationship is tenuous at best. Amir thinks Robin is nothing more than a crazy old loner who lives in the woods; Robin sees Amir as materialistic and putting up a front. What’s unique about the script, co-written with Sarnosi by Vanessa Block, is how it layers the characters and story. The film begins with notes of John Wick (2014) and Fight Club (1999), following Cage’s dogged, bloodied character on a mission to recover his pet. Robin introduces Amir to Portland’s underground of restaurant employees who place bets on a violent game: One contestant stands with his hands behind his back and attempts to remain conscious while another pummels him mercilessly. Amir can only watch in horror and wonder, “Who is this guy?” Robin is far more than a forest hermit who can take a beating.

Cage performs in a mode audiences haven’t seen from him in some time. This isn’t another of his low-budget actioners with a forgettable title, like Drive Angry (2011) or Seeking Justice (2012), nor one of his tasty genre morsels like Mandy (2018) or Color Out of Space (2020) that have earned him cult cred in recent years. Instead, his performance in Pig recalls his Oscar-winning work in Leaving Las Vegas (1995) and nominated turns in Adaptation. (2002). Cage, whose company Saturn Films co-produced, reminds us that when he’s doing the work for more than a quick paycheck, he’s capable of brilliance. As Robin’s mission to recover his pig continues, the performance becomes ever more complex and dependent on a balance of rage, grief, and self-certainty. It’s a carefully measured physical performance as well, with the same tortured quality of his injured cop in Bad Lieutenant: Port of Call New Orleans (2009). Thrashed and covered in swollen bruises and dried blood, Robin lurches from one scene to the next. But rather than confront each situation like a monster, he reengages his past life with a new perspective. Cage plays the contrast beautifully.

Gradually, we learn more about Robin, who once dominated Portland’s food subculture as a legendary chef. Then his wife died, and he disappeared into the woods. We also learn about Amir, whose mother attempted suicide and whose father, Darius (Adam Arkin), keeps her nestled away on life support. “When you’re like that,” he says of his mother’s depression, “it’s gonna happen sooner or later.” And we wonder if that’s what will happen to Robin. Amir is desperate for his father’s approval, so he projects success and feigns culture—he only listens to classical music, or rather, an audio course explaining how to appreciate classical music. Amir is one of many characters in Pig who adopts an image or embraces an occupation yet remains untrue to themselves. Gradually, Robin’s austere sense of certainty about his pig, his conviction about his wants and needs, becomes a stark counterpoint to others living an affected life.

In a wonderfully acted and written scene, Robin and Amir dine at a restaurant whose chef (David Knell) once worked for Robin. It’s a highbrow place that serves art cuisine, and it’s impossible to get a table. But Robin’s name opens a lot of doors. Searching for his pig, Robin confronts the chef, an avid truffle buyer, and tells him, “You aren’t real.” The chef once dreamed of opening a true English-style pub, where he planned to serve bar food. Instead, he has since conformed to the realm of high-level restaurants and meticulous concept food. “Why do you care about these people?” Robin asks him. Even though he’s riddled with battle wear and a frightening sight in the restaurant’s antiseptic space, Robin follows Polonius’ adage to thine own self be true. He encourages the chef to stop putting on airs. And that’s when the camera cuts to Amir, a walking façade, finds his eyes welling up with tears. “We don’t get a lot of things to really care about,” Robin says, devastatingly. 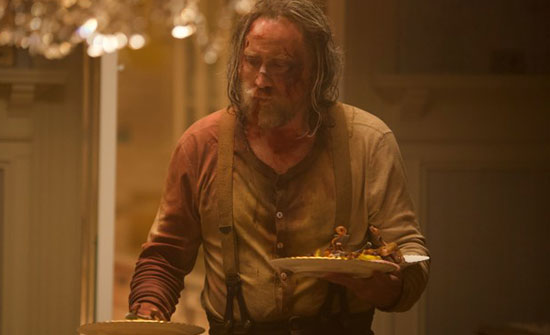 For Robin—who later admits he doesn’t need his pig to find truffles, he just loves her—the pig is a symbol of everything pure and true, of our core desires and pleasures. Their simple life together has become his haven. She’s a companion that, like a dog, answers to a whistle and follows her master. But unlike a dog, she represents a bygone era of truffle hunting. She’s an embodiment of the past, the force that shapes every major character in Pig. However, the future is just as powerful. Another speech finds Robin waxing about the inevitable earthquake that will rock the West Coast and leave everyone with no way to escape certain doom. Still, as the film carries on, Robin finds that he can help others confront what they have denied or tried to escape through food. A pivotal moment comes when Robin cooks a specific meal for Amir and Darius. Arkin, who at first plays Darius like an intimidating gangster, reveals that he is tortured by the past like Amir and Robin. It takes only a few bites of Robin’s cooking to cause Darius to relive everything that turned him into a coldhearted godfather of truffles, revelations after which he crumbles emotionally.

Sarnoski’s assured debut creates an almost mythic underworld in Portland, propelled by hidden markets, shady deals, artistic ambitions, and massive profits. It’s a confident and controlled first feature as you’re ever likely to see. At times, it’s almost meditative about our emotional connection to food and its rare ability to channel a memory from the senses. Unfolding in a series of chapters with names such as “Mom’s French Toast & Deconstructed Scallops” or “A Bottle, A Bird, A Salted Baguette,” the film is wrapped in heartbreak and remembrance. Robin passes through places and reconnects with people he hasn’t seen for years, but he can never return to this life. He belongs in the woods. When Robin first comes back, Sarnoski and editor Brett W. Bachman render cinematographer Patrick Scola’s otherwise sullen images in a kaleidoscopic blur. The lights and noises present Robin, who has found peace in the forest, with a sensory overload. Elsewhere, Scola relies perhaps too much on shaky handheld images to give the film its sense of grit and emotional rawness. But the performers carry us through every scene, giving them dimension with their persistent heartbreak and growing self-certainty.

At one point, Cage enters a diner, and a Tom Waits song plays on the radio. How appropriate, since Pig feels like the cinematic equivalent of one of Waits’ gravelly-voiced outpourings, somewhere between “Hold On” and “Misery is the River of the World.” It’s rough around the edges yet also beautiful and life-affirming. It questions how people resolve to adopt roles or wear masks, while underneath, they remain unhappy and betrayed by themselves. Somber and cynical about our habit of choosing financial comfort and assimilation over our dreams, Sarnoski’s film asks that we question whether our choices are authentic. For many viewers, it will be the last thing they expected from a Nicolas Cage film. For some of us, it’s the long-overdue return of an actor whose presence nearly gave in to irony. But Pig is a rare film that treats its characters with an open heart and its themes with an intimate profundity that never feels affected or disingenuous. Like Robin’s effect on other characters, it can take people to places they may not want to go but should.