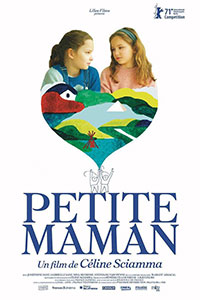 Céline Sciamma’s Petite Maman finds the eight-year-old Nelly (Joséphine Sanz) exploring the woods behind her late grandmother’s home, where she finds another girl her age named Marion (Gabrielle Sanz)—and she’s the spitting image of Nelly. Although confronting one’s doppelgänger has long been the source of terror in works ranging from Fyodor Dostoevsky to Jordan Peele, neither child mentions their uncanny resemblance to one another. Instead, the meeting of Nelly and Marion doesn’t have a single malicious or nervy undercurrent. In the place of dread, there’s a sense of gentle discovery that resists stepping into wonderment. Whatever magic has brought these two together, it’s the same brand of kindly enchantment that sent the young Satsuki and Mei into the forest to discover a gentle bearlike creature in Hayao Miyazaki’s My Neighbor Totoro (1988). Nelly and Marion accept each other, developing a bond that extends beyond best friends or sisterhood to a child understanding her mother from across time. A curiously high-concept film for the French auteur, Petite Maman might also be Sciamma’s simplest and most gemlike film to date.

Sciamma’s penchant for exploring the distinct identities of girls and women continues here in a grounded cinematic fairy tale. The film opens with Nelly in her grandmother’s nursing home, saying “au revoir” to the residents she has come to know. Her grandmother has died, and she will probably never see these people again. Her mother Marion (Nina Meurisse) intends to clean out her undisturbed childhood home of her mother’s things, and on the ride there, we witness Nelly’s beyond-her-years instincts. She knows that her mother needs to be cared for right now. So, Nelly shares her snack with her mother—and we see only little hands reaching from the back seat to the front seat, feeding her mother cheese puffs and a sip from her juice box. Later in her childhood home, Marion shows Nelly drawings and notebooks. “You weren’t very good at spelling,” Nelly observes, but adds, “You were good at drawing.” Nelly’s tone has a parental sound, as though she’s there to support her fragile mother in a time of loss. The connection between daughter and mother overlaps further when Nelly meets the 8-year-old version of her mother in the woods. 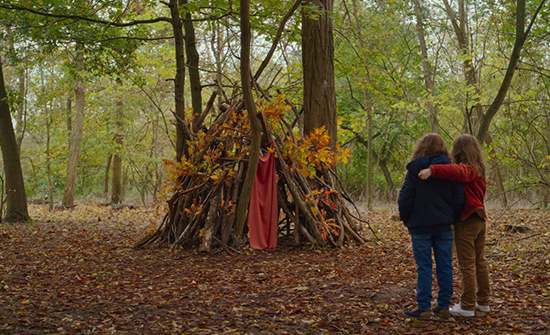 The relationship between the two takes more than one direction, and there’s no cynicism or need for explanation—no expositional scene that sheds unnecessary light on why this is happening. Sciamma resists the Hollywood impulse to over-explain, while another filmmaker might underscore the craziness of the situation. Instead, Nelly embraces the rare opportunity to be with her mother without questioning it. When Nelly and the small version of Marion meet in the past’s version of the home, where Marion’s middle-aged mother (Margot Abascal) walks about with a cane, Nelly’s grandmother doesn’t point out how the children look alike, nor does Nelly’s father (Stéphane Varupenne) mention young Marion in the contemporary version of the house. It’s enough that the situation provides Nelly with a better understanding of her mother; to detail the plot mechanics would be superfluous. Sciamma’s script contains a longing need for children to identify with their parents, while it also acknowledges that there’s a grand divide in everyday situations. For instance, Nelly’s father admits to her that he was afraid of his dad. I wondered, will he ever get to meet his father as a boy?

Sciamma’s treatment of time is playful yet not without meaning. Each scene between Nelly and Marion—their play-acting, their fort-building, and Nelly’s sharing of future music with her mother (a synth-laden song by Para One)—lessens their temporal expanse. But Sciamma also understands how time works in a child’s mind. One of the few expressive formal touches in the otherwise sedate presentation occurs when Nelly turns down her father’s offer to read a bedtime story. She’s eager to spend more time with Marion tomorrow. So he activates a time accelerator by switching off the light, allowing Nelly to sleep and, in the blink of an eye—and the film’s only sharp cut—Nelly finds herself in the woods again instantly. These borderline sci-fi ideas have a similar effect as the catbus or soot sprites in My Neighbor Totoro. Although they’re fantastical and strange, there’s never a shred of danger in the proceedings, nor a need to investigate their origins. At every leap, the setup allows Nelly to understand Marion (and thus, her mother) better, especially when Marion tells Nelly, “You didn’t invent my sadness.”

Sciamma made this follow-up to her international breakthrough Portrait of a Lady on Fire (2019) in the fall of 2020, under the most stringent pre-vaccine pandemic restrictions. Shooting in the woods where she played as a child, the director captures how a forest path, a hidden fort, and a friend’s house can feel like an entire world when you’re young—and revisiting the places that meant so much to us as children can conjure all sorts of memories. Scenes of Nelly and Marion playing in the woods, acting out an elaborate scripted drama, or simply eating some not-so-tasty soup made by Marion’s mother reminded me of traveling to Silver Lake, Minnesota, to visit my grandmother as a child. The little town seemed like a far-reaching world, and I explored its gigantic main street and parks, often alone yet without a hint of danger (also, my grandma’s cooking was better than that of Marion’s mother). Returning to the neighborhood as an adult for the first time a few years back, the experience gave me a sense of nostalgia, of course. But the tiny place also awakened feelings of loss and affection that my memory had stored away for a long time. Indescribably, Sciamma manages to portray how memory floats across time in ways that remain unclear, though their effect is undeniable. 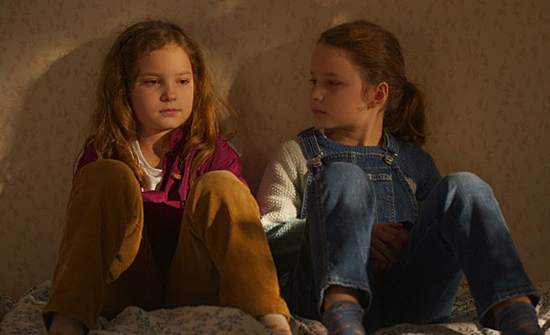 The film has been masterfully assembled by Sciamma and editor Julien Lacheray. Without bold formal trickery, just subtle progressions in the order of shots, the filmmakers convey a sort of tunnel between worlds. The shots are filmed from the perspective of an eight-year-old, low to the ground, making the modest homes and forest clearings seem more significant than they might be to adults. When Nelly makes her way through the woods to Marion’s house, the destination is the same place Nelly just left. Still, the implied journey feels almost supernaturally transportive, thanks to the editing. Cinematographer Claire Mathon, who also shot Spencer (2021), captures a range of autumnal colors and moods—the film uses the browns, yellows, and oranges of fall in a classical literary motif, signaling a necessary period of change through aging and death before growth. And regardless of death’s presence at the center, there’s a calm acceptance of this order, just as the understated filmmaking draws a parallel between two periods of time and how Nelly grows from her experience.

Indeed, despite the potential logline, there’s not a sensational flourish in the entire film. Petite Maman might be called a time-travel film akin to Robert Zemeckis’ Back to the Future (1985), where Michael J. Fox goes back in time to meet his teenage father, and awkward hilarity ensues. But rather, Sciamma has mentioned in interviews that Pixar’s Inside Out (2015), where a young girl’s anthropomorphized emotions guide her, supplied some inspiration. Another reading suggests the entire film takes place in Nelly’s head. Consider how one night, Nelly’s mother notes how she always asks questions before bed. “That’s when I see you,” Nelly replies, matter-of-factly. The line not only cuts into the separation between mother and daughter, but it suggests the possibility that Nelly has imagined or dreamt everything as a way of better understanding her mother’s perspective. It’s not beyond reason to think Petite Maman takes place almost entirely in Nelly’s creative and intelligent mind—similar to Terry Gilliam’s Tideland (2005), in that both introduce a fantasy as a method of self-therapy (albeit far less disturbing in Sciamma’s film).

The method of Nelly’s experience, either by dream or time-tunnel, isn’t the point. The means supply a way for family members to better understand each other through shared experiences and reveries—whether it’s Nelly inhabiting her mother’s world or merely seeing the same black panther at the end of the bed that Marion did as a child. Though it’s potentially lofty and unquestionably tender subject matter, Sciamma’s story does something miraculously small and intimate inside the film’s all-encompassing 72-minute runtime. Anchored by real-life twins Joséphine and Gabrielle Sanz, whose appearance and natural bond extend the film’s theme of identifying with someone close from across a vast temporal, physical, or psychological barrier, the film operates like a storybook. But this isn’t a winking story that calls attention to its narrative devices; instead, Petite Maman (literally “little mother”) has the singular effect of a classical fable or Miyazaki fantasy. The film exists on its own terms so that, no matter your age, Sciamma’s vision will welcome you into its cherishable world and leave you pondering its many secrets and insights.