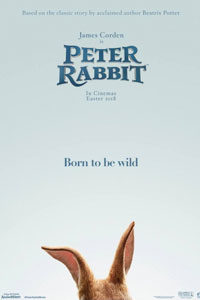 Beatrix Potter’s children’s books receive the Hollywood treatment in Peter Rabbit, a loud and abrasive film populated by cute creatures and zippy, restless humor. A British conservationist and general friend to animals, Potter published more than 20 storybooks between 1902 and 1930, warming the hearts of children the world over. Her simple illustrations captured the naturalism of the animal kingdom around her quiet country house, Hill Top Farm in Near Sawrey, while also giving them anthropomorphized qualities and little jackets. An entire story, such as her first book The Tale of Peter Rabbit, might entail Peter’s adventure into the garden of crabby farmer Mr. McGregor to steal some vegetables, followed by a stomach ache and a spot of Camomille tea. Such conflicts remain refreshingly modest and simple. By contrast, this production seems catered to children suffering from Attention-Deficit Disorder.

A blend of live-action and animation by Animal Logic (Happy Feet) and Sony Pictures Animation (The Emoji Movie), Peter Rabbit features winking humor, a postmodern approach, and remains all-too-self-aware. Take how the movie regularly introduces classical story tropes and then quickly abandons them, telling us “this isn’t that kind of story” to catch the viewer off guard and appear edgy. The movie desperately wants to shake off Potter’s storybook quality for something annoyingly hip and relevant. Director Will Gluck, perhaps best known for Easy A (2010) and Friends with Benefits (2011), appeals to the hyperactive viewer with fast cutting, some admittedly funny-because-it’s-true asides about animal behavior, and a soundtrack that doesn’t know when to quit. From start to finish, Gluck slathers on pop-music to set the tone of every sequence, connecting every action and emotion with the corresponding lyrics of songs by bands like Vampire Weekend, Fitz and the Tantrums, Dave Matthews Band,  The Boy Least Likely To, and inevitably The Proclaimers with their overused ’90s single “I’m Gonna Be (500 Miles).”

The story opens when the titular bunny (voiced by James Corden) ventures into the lush garden of Mr. McGregor (Sam Neill) with the help of his siblings Flopsy (Margot Robbie), Mopsy (Elizabeth Debicki), and Cotton-Tail (Daisy Ridley), and their cousin Benjamin (Colin Moody). After inducing a fatal heart attack in the old man, the animals run amuck, eating his food and throwing a college-style bash in his house, demonstrating they don’t understand moderation. Their newfound freedom is short-lived, however, as McGregor’s distant nephew Thomas (Domhnall Gleeson), an obsessive-compulsive with anger management issues, inherits the property. Although Peter and his family retain the protection of Bea (Rose Byrne), a genial wannabe artist who lives nearby, Peter finds himself entangled in a conflict with Thomas worthy of Bugs Bunny and Elmer Fudd. Unfortunately, Bea and Thomas form a romance, complicating matters for Peter.

That romance is a misguided development, since imagining Bea and Thomas remains an unpleasant concept. No matter how much apologizing and reforming Thomas does in the third act, his psychotic behavior early on leaves him unrecoverably damaged in the viewer’s eyes. He dives into the Acme bag of tricks, using sharp garden tools, metal traps, electric fences, and finally small explosives to (unsuccessfully) rid himself of the garden pests. We also see his meltdowns at his former job, a toy shop, which gives him the boot after an unsettling tantrum. Then again, Bea isn’t exactly a catch. She’s a dim sort who makes awful abstract oil paintings, but she also dabbles in Potter-style watercolors of Peter and his family. She ignores the fact that the bunnies wear jackets, and later seems incredulous towards the idea that Peter could talk or have motivations beyond a natural instinct. Both of these characters feel off-kilter and just-plain-weird. Seeing them together never feels right.

The animation is excellent. Animals seem to inhabit their spaces in the real world, avoiding any of the distance the viewer normally experiences when CG creatures appear in a live-action setting. The realistic looking fur and movements never cease to impress, while the animals’ eyes prove expressive and some of their more outlandish maneuvers look cartoony. The filmmakers have transferred Potter’s ability to depict naturally lifelike, yet also human-like animals into this setting. At the very least, the viewer comes away with a sense that human beings have encroached on the natural world—a conservationist message Potter would approve of. But it’s doubtful Potter would appreciate the Looney Tunes brand of violence here—commited against humans, mostly—complete with electrocutions and bodies projected at high speeds against walls, stairs, and stone railings. Nor would she appreciate how one of Peter’s sisters has grown addicted to jumping from high places and landing face-down on a hard surface to break ribs; the bunny feels reassured by her remaining, unbroken bones, and plans to continue jumping until they’re all shattered—which is pretty sick.

Injecting ironic humor and cartoon slapstick into Potter’s world is a gross misunderstanding of the material. Of course, the character of Peter Rabbit wasn’t chosen because of his wascally qualities. Writers Gluck and Rob Lieber have confused him with a prototype of Bugs Bunny who breaks the Fourth Wall, puts on women’s clothes, and drops anvils on the heads of his enemies. (The animal characters also speak in lazy colloquialisms like “I know, right” and “Let’s do this” and “I got this”—a pet peeve for this critic.) There’s no jealous love or understanding of Potter’s legacy here, just a cash grab. The filmmakers purchased the intellectual property and the established audience that goes with it. Rather than stay true to the material, they have tried to compete with today’s brand of relentless animated features. Why not just make another Looney Tunes: Back in Action instead? The resulting film is a disposable product that messily adapts its source, and cannot be forgotten soon enough.