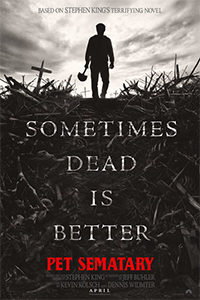 Stephen King’s Pet Sematary is his most terrifying novel, and like most great books, Hollywood has found it difficult to translate. The majority of King’s story takes place in the head of its protagonist, Lewis Creed, who has moved his wife Rachel and two young children, Ellie and Gage, to the sleepy town of Ludlow, Maine, where he serves as a doctor at the local university. Hidden in the vast woods of their property is a cemetery for cherished animals who have died. Around the burying grounds is a makeshift barrier established long ago by the local tribes who fear the area, and beyond the barrier is a “sour” ground, and the things buried there come back from the dead. Inevitably, one of Lewis and Rachel’s children die, and Lewis resolves to deposit his child in the cursed soil, hoping for a resurrection. However, King’s specialty has always been putting us into the minds of his characters, and the process through which Lewis arrives at his decision to resurrect his child is a primarily emotional and psychological one, where grief strips down his staunch realism and makes him open to the possibilities of the blackest magic. But filmmakers have thus far been unsuccessful in capturing the essential rationalizations and mental state that drive Lewis to his fateful choice, concentrating instead on the reanimation of dead flesh and the evil spirits that now inhabit it.

The first attempt at translating Pet Sematary to the screen hit theaters in 1989 and has since become something of a cult favorite, although director Mary Lambert’s effort feels like a rushed and clumsy shorthand summary of the novel’s main plot points. Lead actors Dale Midkiff and Denise Crosby engage in some soap-opera level overacting, but Fred Gwynne, appearing as Lewis and Rachel Creed’s kindly neighbor Judd, became iconic with his thick Maine accent and wincing death at the hands of Miko Hughes’ scalpel-wielding toddler. It’s ultimately unsatisfying as both an adaptation and a horror movie. The new version by directors Kevin Kölsch and Dennis Widmyer is a better adaptation and a better movie, but it still fails to capture, with suitable emotional urgency, the mental gymnastics performed by Lewis that take him from a hardened scientist to a father fixated on bringing his child back from the dead. Made with the same quality of many King adaptations since the huge box-office success of 2017’s It, the new Pet Sematary is an improvement, albeit not enough of one.

Among the improvements to Lambert’s original, the actors elevate this version. Starring as Lewis and Rachel, Jason Clarke has a sturdy screen presence, while Amy Seimetz, no stranger to the genre, offers a vast upgrade over Crosby’s harsh turn. Seimetz gives Rachel a sensitivity and justified apprehension about the subject of death, which emerges from clever alterations made in Jeff Buhler’s screenplay to Rachel’s backstory involving her late sister Zelda (Alyssa Brooke Levine), a figure twisted by spinal meningitis. John Lithgow may not engage in r-dropping idiosyncracies as Gwynne did (“The ground out there is sowah, Lewis”), but the actor imbues Judd with a kindly if tortured presence. Another bonus is Ellie as played by Jeté Laurence, a child actor who delivers on the increased demands of her character. It’s no secret, based on the spoilery trailers, that the new Pet Sematary does away with Ellie and not Gage. And so Laurence is required to play a convincing nine-year-old, but also the back-from-the-dead, murderous version of her. She’s quite good in the former role, somewhat hammy in the latter, but only because the script calls for it. 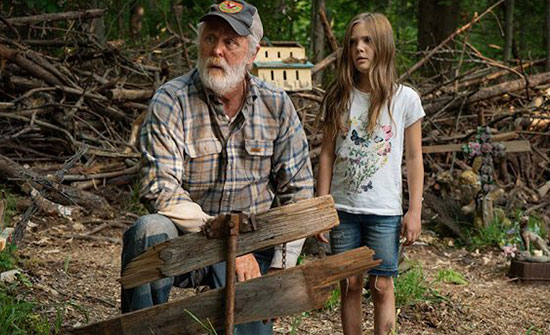 Buhler’s screenplay offers several other small alterations to the story that play on the viewer’s expectations from the novel and earlier film. The moment where a semi-truck barrels down the country road toward one of the Creed’s children is filled with dread for Gage, who was the victim, and resurrected, in both King’s book and Lambert’s film. Kölsch and Widmyer, who made Starry Eyes (2014), use our awareness of the source material to build suspense around Gage’s death, but then they pull a switcheroo on the audience when the accident unfolds in unexpected ways. After Ellie returns and goes bad, her attack on Judd is similarly reconsidered, using Lambert’s iteration as a platform to work against. There’s a shot in the original from under a bed, looking at Judd’s Achilles’ tendon, which Gage then slices through; that same shot is employed here, but the slice never occurs, at least not when we expect it. Given these and other winking acknowledgments of what came before, watching the new Pet Sematary for a second time may prove less rewarding, since the element of surprise, which the filmmakers have made an essential component of its construction, will be gone.

However, Kölsch and Widmyer strike a vital spooky tone, where the wind whispers, the old house creaks, and fog looms in the forest at night—even if some of the effects to achieve this consist of unconvincing CGI. King has already defined his characters with the theme of death, from Lewis’ view that death means the body is nothing more than dead meat, to Rachel’s desperate need for a soul to exist in an afterlife. This is furthered by a story element from King’s book missing from the previous adaptation. The acres beyond the Pet Sematary, frighteningly called “Little God Swamp,” are haunted by a corrupt spirit—a Wendigo that compels people to seek out the cursed site, bury their animals there, and eventually put humans in that same ground. The new Pet Sematary includes this dark specter component in the film, making the characters seem overcome by an inhuman force that influences their decisions. Although this inclusion felt most appropriate in capturing the spirit of King’s book, not all of the additions and alternations are an improvement. The sheer amount of time spent with the returned Ellie, for instance, takes the film to a conclusion that in some respects is scarier, in others is less emotionally devastating.

Unfair though it may be to judge the new film against the book and the original adaptation—I would usually argue that a book adaptation should be taken at face value—the filmmakers seem intent on making those associations for us, using them to their advantage as a major influence on how they intend the audience to interact with their film. Comparisons aside, the new Pet Sematary contains strong performances by the cast and several well-executed moments, especially those with the resurrected family cat, Church. But the emotional center of King’s story, Lewis’ leap from a doubter to a grief-stricken father who desperately needs to believe, is handled with two brief shots of a funeral and its aftermath. At 101 minutes, Pet Sematary feels like it’s in a rush to get to the gore, whereas the real horror of this story lies in the justifications that lead a rational man to go against everything he believes. Without those qualities of the story in place, the resulting film is good for a few thrills, but ultimately another hollow take on King’s masterwork.