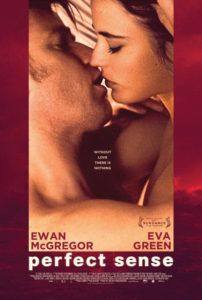 Imagine a disease that takes your senses one at a time, yet offers a period in-between each new symptom—and therefore the loss of another sense—allowing the victim to become acclimated to the change over a series of months, if not much longer. Before each sense fades away, there’s an inexplicable surge of emotion. The sense of smell is the first to go, and it’s preceded by a wave of despair. A jealous hunger announces the loss of taste. Frenzied rage heralds the failure of your hearing. And finally, before your eyesight goes, you experience an all-consuming feeling of hope and love. Such a degenerative malady might be considered merciful in its capacity to delay its own progress for the sake of its victim’s emotional adjustment. As T. S. Eliot once wrote, This is the way the world ends, Not with a bang but a whimper.

Perfect Sense is a parable in the same manner as Lars von Trier’s Melancholia, in that both films use their respective apocalypse as metaphoric vocabulary. Whereas Von Trier’s film features a rogue planet crashing into Earth as a symbol for the hopelessness of depression, director David Mackenzie (Young Adam) and screenwriter Kim Fupz Aakeson employ a global plague to examine how people take their existence for granted. An expository narrator (voice of Katy Enge) explains that scientists can’t figure out the disease; they’re stumped as to its cause and aren’t even convinced that it’s a disease at all. The spreading symptoms, some think, may be a result of environmental changes on a planetary scale. Not that the disease’s origin matters much to the story. After all, the film doesn’t care about the worldwide effects, as Contagion did; the narrative is limited to a love story set in Glasgow.

A raffish chef, Michael (Ewan McGregor), and a heartbroken epidemiologist, Susan (Eva Green), pursue a romance after a casual encounter, though both have commitment issues. As the disease progresses around them and senses drop from their list of five, the characters must reinvent ways of spending time with one another, showing each other affection, and carrying out their jobs. Susan seems none-too-devoted to finding a cure for the disease; in the few scenes where she’s at work, the pandemic doesn’t rouse her day-and-night devotion. Meanwhile, when people lose their smell and taste, Michael’s profession requires some ingenuity. Along with his sous chef (Ewen Bremmer), Michael creates foods based on their texture, accentuating soft and spongy and crunchy foods to enliven the feeling of food going down. Indeed, one of the more loving scenes between Michael and Susan shows them in a bathtub together, experimenting with the textures of shaving cream and soap in the mouth.

McGregor and Green make an attractive couple, but their romance is limited to a basic exploration of sensory pleasure, yet, strangely, it never manages to be sexy or romantic. Through them, we see how people might go on living without their senses. This isolated approach to a larger issue recalls 2008’s Blindness, about a city stricken with an inexplicable loss of sight. Between the loss of each sense, the narrator chimes in to relay how the rest of the world has reacted, in turn explaining how the landscape has changed for our central lovers, who nevertheless are unconcerned about how the planet is coping. And yet, theirs is not a passionate love affair that strikes an emotional chord with the viewer, since both characters remain remote and unwilling to fall for one another, even in the midst of the widespread tragedy. By the time they realize that they’re truly in love, it may not be too late for them, but it’s too late for the viewer, who stopped caring long before their fateful reunion.

With its multi-meaning title and high-concept scenario, Perfect Sense fails on several levels, leaving the audience to wish the proceedings were extended by another half-hour to flesh-out some of its more intriguing ideas. (For example, what happens after the last sense, touch, begins to fade, and the characters are left with nothing but their own thoughts?) As a character-driven love story, the romance falls flat and contains little emotional resonance; as a tale of a large-scale apocalyptic outbreak, the film fails to depict an appropriate scale, using archived news footage and empty streets to set the stage. The trouble with the film is that it never settles into one or the other, small or large-scale storytelling. The narration recapping the world’s reaction to the latest sensory loss feels pointless next to intimate scenes where Michael and Sarah explore their newfound limitation, and vice versa. Ideally, these two strains would have interwoven to achieve the narrative equilibrium of, say, Children of Men, but this never happens. As a result, the film is filled with underdeveloped threads and half-explored notions, and, unfortunately, never delivers the way it should.