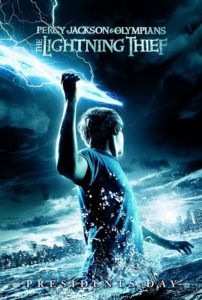 Percy Jackson & the Olympians: The Lightning Thief recalls J.K. Rowling’s mythical world of wizards and witches so closely, it’s best used as a reminder of why the Harry Potter-verse works so well. Based on Rick Riordan’s derivative series of teen novels, this is a by-the-numbers fantasy adventure that merges the modern world with a magical one. It’s the kind of movie where the teenage hero, who has just discovered he has unimaginable power at his fingertips, remains hip to the teen target audience by wearing a hoodie. Uncountable would-be franchises have tried the same tactic, forgetting that the most appealing aspect of a fantasy film is the escape.

Involving all manner of notable figures from Greek mythology, the story brings gods and half-blood demigods into a contemporary setting, whereas Harry Potter places modern adolescents into a magical world that the audience explores along with its hero. There’s a distinct difference in the approach, and an even more distinctive upshot. In one, we’re transported into a narrative bound by discovery, whereas the other suggests the ancient gods are content with hanging around various locales in America. Pitting teenage demigods against the apathy-driven Lotus-eaters of Las Vegas just seems silly, and that’s the way it comes across onscreen.

Logan Lerman (from Gamer) plays Percy Jackson, and the young actor, with his plucked eyebrows and mopish hair, couldn’t be less likable in the role. His character is cocky and brash and has daddy issues, but that goes with the territory when you learn your dad doesn’t have time for you because he’s Poseidon (Kevin McKidd), god of the sea. Jackson is your average high-schooler who learns that he was born of a god and a mortal woman (Catherine Keener). Accordingly, he has the supernatural ability to control water, not to mention the instincts of a warrior. He learns this earlier than he was supposed to because someone has stolen the lightning bolt of Zeus (Sean Bean), and everyone in the pantheon of the pagan gods believes it was him. Why they think it was him when he didn’t even know about his godly origins is never explained…

It seems everyone around Jackson knows he’s a demigod, but they’ve masked their own associations to the mythical world through various disguises, most of them involving crippling disabilities. Jackson’s wise-crackin’ best friend Grover (Brandon T. Jackson) appears to need crutches, but he just walks funny because he’s actually a satyr with goat legs. His wheelchair-bound Classics teacher Mr. Brunner (Pierce Brosnan) can stand just fine, only, being a centaur, his lower half is that of a horse. Grover and Brunner tell Jackson that all sorts of bad beasties from Greek mythology will be after him, looking to find Zeus’ lightning bolt, which he doesn’t have, to take over the world. So they take Jackson to Camp Half-Blood, where all demigods train to use their powers.

What ensues is a monotonous teen fantasy where Jackson, Grover, and their fiery cohort Annabeth (Alexandra Daddario), daughter of Athena, hunt down the real lightning thief. On the way, they encounter a barrage of various monsters, including a five-headed Hydra, the aforementioned Lotus Eaters, and even Medusa. But since all of those Greek myths you learned in school are real according to the script, shouldn’t Medusa be dead? Didn’t Perseus already decapitate the Gorgon serpent-woman? There are marble and bronze statues all over Europe that seem to think so. Medusa, by the way, is brought to life by Uma Thurman, who channels the worst parts of her performance as Poison Ivy in Batman & Robin to fulfill the role. Luckily, Jackson has an iPhone to watch her through the reflective back and plan his attack, which doesn’t hurt for product placement either.

The special FX in the film are above average for this sort of sub-par fantasy, most notably the rendering of the Hydra and of Hades (played by none other than Steve Coogan). It’s easy to lose oneself in the computer-generated wizardry of elaborate sets and mixed creatures, however the banal plot doesn’t keep the viewer interested. We’re more concerned with why stars like Bean, Brosnan, Coogan, and Thurman agreed to their thankless roles. Doubtless, this movie will join the increasingly long list of failed Harry Potter wannabe franchises, in the crapshoot next to The Dark is Rising, Eragon, and sadly The Golden Compass.

Questions remain: Why do the Greek gods hide from the modern world? Why do they not interact and make their presence known to the world at large? If they’re so powerful, why did Christianity, Islam, and Hinduism become the dominant world religions? Our world no longer believes in them, and they seem content with that, enough that it’s a non-issue for the story. But it’s certainly an issue for the movie. Perhaps the curious and unexplained relationship between the gods and humanity will be better explained in Clash of the Titans, due in April 2010.

The story, adapted by screenwriter Craig Titley (Scooby Doo), doesn’t feel cohesive and the stakes never feel grave enough to keep us interested. There’s some mention of a massive cloud forming over the entire world and a possible war between the gods should the lightning bolt fall into the wrong hands, but that threat never feels real because the film hasn’t taken the necessary time to develop the movie’s mythological world. And since the story takes place in our world, but simply with characters from Greek mythology interspersed here and there, there’s no sense of wonder. Director Chris Columbus, who helmed Harry Potter and the Sorcerer’s Stone and The Chamber of Secrets, adds no style to the material here, which was the principal complaint of his work on those Potter films. Maybe he should find another genre.