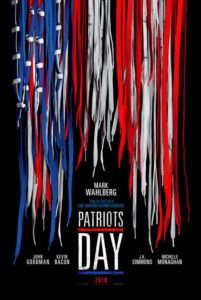 In the early scenes of Patriots Day, a detailed recreation of the 2013 Boston Marathon bombing, director Peter Berg shows Jessica Kensky (Rachel Brosnahan) waking up early on April 15 to greet her husband, Patrick Downes (Christopher O’Shea). As the couple rolls around in their bedsheets, drenched in idyllic morning light, Berg pans over their legs and lingers there. And when Jessica gets up and walks by, she runs her hand over Patrick’s foot. Hours later during the bombing, Jessica loses both of her legs and Patrick loses his left leg. Berg treats several bombing victims with similar touches of dramatic irony, each more glaringly unsubtle than the last. Such moments are meant to be poetic and tragic, but their obviousness tarnishes the director’s latest docubuster, even as his film proves well-meaning and, elsewhere, demonstrates the utmost respect for those depicted.

Berg’s second film of 2016 after Deepwater Horizon and his third docu-drama in as many years, Patriots Day draws from alarmingly recent headlines to lure its audience. Viewers have flocked to theaters recently to find real American heroes, and Hollywood has responded with the real-life stories of Desmond Doss (Hacksaw Ridge), Captain Chesley Sullenberger (Sully), and Marcus Luttrell (Berg’s Lone Survivor). But the hero that emerged from the 2013 bombing was not an individual; it was the city of Boston. (Indeed, a better title for Patriots Day would have been “Boston Strong”.) But rather than demonstrate how Boston came together through, say, a mosaic character piece à la Robert Altman, Berg and his team of five credited screenwriters (himself included) use their meticulous research to combine fact and fiction in deceiving, frustrating ways. Specifically, Patriots Day fabricates a lone hero, as opposed to showcasing the dozens of first-responders, police, and investigators who helped victims and neutralized the bombers.

Co-producer and star Mark Wahlberg appears as Boston police Sergeant Tommy Saunders, a fictionalized composite character who conveniently appears at every important event pertaining to the bombing. When the bombs go off, Tommy is right there and helps control the scene. He plays a crucial role in the manhunt, having relationships with the real-life figures involved: Police Commissioner Ed Davis (John Goodman), Governor Deval Patrick (Michael Beach), and lead FBI investigator Richard DesLauriers (Kevin Bacon). And almost as if there’s two of him, Tommy is also on the street. After the bombers—Tamerlan Tsarnaev (Themo Melikidze) and Dzhokhar Tsarnaev (Alex Wolff)—carjack Dun Meng (Jimmy O. Yang), Tommy is right there when Dun escapes. When there’s a shootout in Watertown with the Tsarnaevs, Tommy takes part. And, of course, he’s the point man when Dzhokhar is discovered hiding in a boat.

Tommy is a Hollywoodized contrivance and remains contrary to the rest of the film. It’s strange, because in all other areas besides Tommy, Berg’s meticulous research and recreation of the events contain a cinéma vérité stylization. The director incorporates actual footage of the marathon and bombing from news outlets and smartphones; he shows real footage of Tsarnaevs on security cameras during the tense days of the manhunt; he shoots on the actual locations where these events occurred. Editors Gabriel Fleming and Colby Parker Jr. create a spasmodic rhythm to the film, cutting between actual footage and Berg’s dramatizations shot by cinematographer Tobias A. Schliessler. The film yearns for realism and eventually resembles a documentary more than a drama. In the last ten minutes, Berg’s film sets aside the dramatization of events for several talking head interviews with victims and officials—making the viewer wish they had been watching a documentary about the bombing all along.

Even so, several sequences are astoundingly well made. When Dun has an inner debate about whether to attempt escape from the Tsarnaevs, the viewer is breathless. As a coolly composed interrogator (Khandi Alexander) questions Tamerlan’s suspicious widow (Melissa Benoist), the level of tension and uncertainty is unbearable. Most impressive and thrilling is the violent Watertown encounter between police and the Tsarnaevs, which is aggrandized by the filmmakers—complete with homemade grenades and a shootout worthy of Heat (Berg considers himself a disciple of Michael Mann). Of course, the bombing itself remains the early apex of Patriots Day and reverberates with the viewer and characters throughout the remainder of the film.

But much like his previous two films, the director respects his subject to such a degree that he avoids a critical viewpoint, which makes his the near-documentary quality of his film misleading. Nevermind if authorities followed procedure. Nevermind how nearly everyone involved acted with their hearts instead of their minds (Tommy is a hothead), and the potential danger that represents. Nevermind trying to understand how Bostonians or the media influenced the manhunt. The screenplay reduces a very complicated situation into “good and evil, love and hate,” thanks to Tommy’s speech in the finale. In one of the interviews at the end of the film, Kensky and Downes talk about the bombing and the love that resulted from it, and it’s an endearing moment. However, Patriots Day seems to be more interested in characters who hunger to avenge the victims and bring justice to the evil men who carried out the cowardly attack. Love is an afterthought.

Much like Deepwater Horizon and Lone Survivor, Berg mixes real-life with drama in Patriots Day in a way that is neither wholly realism nor Hollywood artifice. It combines major celebrities with documentary veracity, and the outcome’s incongruities are distracting. The film also serves as a star vehicle for Mark Wahlberg, whose scenes of fictional drama seem even more heavy-handed than Berg’s dramatic ironies concerning the real-life people involved. Meanwhile, actors like Bacon and Goodman deliver solid performances; so do J.K. Simmons and Michelle Monaghan in their supporting roles. The production is capably handled but ultimately misguided. Patriots Day may tap into the emotional impetus of the intricate and complex investigation but, despite Berg’s good intentions, his highly-detailed production recreates a national tragedy perhaps too soon and without enough perspective.