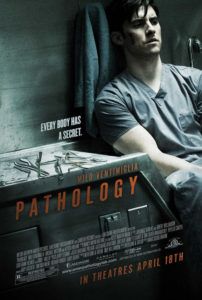 Are there psychological examinations required before doctors-in-training are admitted into their respective programs? That’s what I kept wondering throughout Pathology, a grisly horror film about young forensic pathologists with a taste for the macabre. The first scene shows a group of doctors playing puppet with cadavers, moving their lips and speaking for them, laughing like they’ve never seen anything so funny. It’s too bad we’re not allowed to prescreen our eventual morticians to weed out the weirdoes.

The film is populated with rich yuppies from an insane asylum’s Gap ad, so convinced of their own superiority that they kill people (who “deserve it”) for entertainment. Committed in an otherwise undetectable manner, they murder just to see if the other members of their elitist group can detect how it was done. Having seen it all, no trick in the book eludes their expertise, and given their access to medical equipment, including an incinerator, disposing of any evidence linking them to their victims comes easy. That concept in itself is intriguing, but realized by the writers of Crank, Mark Neveldine and Brian Taylor, the result zooms passed implausible and retains orbit around convoluted.

Milo Ventimiglia (TV’s Gilmore Girls and Heroes) stars as Dr. Ted Grey, a dull and ominous sort whose recent acceptance into an esteemed pathology program separates him from his bland fiancée (Alyssa Milano), and places him in a lab full of obnoxious and unbalanced doctors. Dr. Jake Gallo (Michael Weston) and friends occupy a familiar autopsy room where someone is always eating a sandwich or tossing internal organs like water balloons, completely desensitized to the blood and guts strewn out before them. Each behaving like demented teenagers, their conduct goes unnoticed by oblivious administrator Dr. Quentin Morris (John de Lancie).

We know something’s off when Dr. Jake waxes philosophical with Dr. Ted one night and determines that, “There’s no such thing as guilt, there’s just the fear of getting caught.” It takes nothing more than a hypothetical conversation about If you could kill someone and get away with it, would you? to convince Dr. Ted to select his first victim. Why does he go along with his obviously disturbed colleagues? Alas, the depths of Ted’s personal motives are never explored.

Late at night, all the young doctors meet in the abandoned basement wing of the hospital, smoke meth, and have sex in front of corpses. It’s a wonder the doctors don’t cross the inevitable line and engage in necrophilia, though they certainly venture into sadomasochistic territory, cutting and penetrating each other with scalpels and needles. One thinks of similar scenes in David Cronenberg’s Videodrome; but where that film flourished with social commentary, Pathology does it merely to be shocking.

Every one of the doctors is damage goods—socialites with too much money and time on their hands. Are they just bored? Did they take their college Nietzsche readings too seriously? Have none of them any conscience? What this film direly needed was a humanist skeptic, instead of just freaks who believe we’re all simply animals. The result reminds me of Fight Club, except more horrific and entirely humorless: An organized group meets to rebel against society’s normalcy by embracing the primordial violence and sexuality of human nature. Sounds familiar, right? But in David Fincher’s film, Edward Norton’s character grows beyond the need to beat someone down or splice frames of pornography into children’s movies. There’s no growth to be had for Dr. Ted.

Director Marc Schoelermann offers an ambivalent and narcissistic production shot in varying tones of muted gray, accentuating the nasty makeup effects that will cause veteran horror fans to cringe, as Y-incisions and cracked rib cages look gruesomely authentic. But never more complicated than the reiteration of scenes involving graphic sex and death, Pathology renders itself meaningless, and, thanks to the irritating and inexplicable behavior of its central characters, quite annoying.