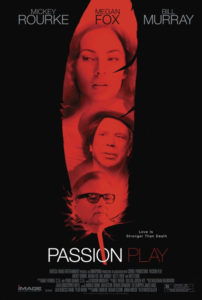 Mitch Glazer takes the leap from screenwriter (of Scrooged and The Recruit) to writer-director with his first effort, Passion Play, a tale about a loser who happens upon a beautiful woman with actual wings growing from her back. Starring Mickey Rourke and Megan Fox, the film attempts artful solemnity and fails, falling deep into the realm of obvious poetic symbolism and moody cliché dialogue. As soon as Fox’s mutant wings start flapping with all sincerity, it becomes one of the great moviegoer challenges not to burst into contemptuous laughter. The audience did, according to reports, at the film’s unveiling at last year’s Toronto International Film Festival. Now the much-reviled feature earns an arthouse theater and video-on-demand release, where it should be seen only by viewers hungry to watch what happens when a train derails with celebrities onboard.

Rourke stars as the gloomy Nate Poole, a jazz trumpeter and ex-junkie, and a character none too different from his role in The Wrestler. After being saved from execution in the desert by a flock of white-clad natives (nevermind), Nate wanders until he arrives at a traveling sideshow in the middle of nowhere. There, he finds Lily (Fox), the show’s star attraction who happens to have wings—complete with feathers and all—though she’s unable to fly. Enamored by her bird-woman freakshow appeal, Nate identifies with Lily’s misfit quality, but he also sees an opportunity to square himself with gangster Happy Shannon (Bill Murray), to whom he owes a considerable debt. Together, Nate and Lily escape the cruel carnival owner (Rhys Ifans) and make way for the city, falling for each other along the way. He plans to settle his debt with Happy by selling Lily for a cool million; but as he schemes, Nate begins to fall for his new winged friend, leading to a passionless, awkward sex scene prominently featuring Fox’s CGI wings.

Whether an eye-rolling metaphor or a transparent allegory about lowlifes getting a second chance, the tired symbolism of angel’s wings and Lily (by way of Megan Fox playing an “innocent”) representing the last bastion of hope for a hard-luck case is grating until it becomes laugh-out-loud contemptible. Though Glazer’s script insists Lily isn’t an angel, just a flightless bird-lady, in the final scene she carries Nate off into the distance, rescuing him from certain death, those shoddy computer-generated wings swiveling with a graceless flap. What’s meant to be dramatic, even graceful, results in this-is-the-last-straw frustration. It’s the cherry atop a film constructed with a weirdo David Lynchian tone and visual style (Passion Play might be a modern version of The Elephant Man), but wrought by sentimentality and the palpable theme of redemption.

Well on his way to vanishing again after his recent comeback, Rourke’s dismal performance consists of mumbling through his lines and contains virtually no expression behind that beaten up, reorganized face of his. Tailored in hipster suits and an uncouth fedora, the beefed-up actor looks ridiculous (like a jazz musician who took a hiatus to become a boxer and then had some bad plastic surgery but then decided to become a jazz musician again). Of course, Rourke’s chequered past makes for some art-imitates-life parallels here, just like The Wrestler, but after this portrayal—a role he’s admitted to taking for the money, no less—Rourke’s own story has gone from inspiring to pitiable once more. After earning his comeback praise, he throws away his second chance on this dud, a film so insultingly contrived no viewer who endures the thing will soon forgive him for it.

As for Fox, she has yet to redeem herself for her entire career, the one watchable exception being Transformers, in which she was little more than a pinup. From the recent confirmation that Diablo Cody is a one-trick-pony in Jennifer’s Body, starring Fox as a literal man-eater, to Fox’s public quarrel with Michael Bay that made her appear bratty and unprofessional (managing to look childish compared to Bay is quite a feat), the actress has had a surprisingly long fifteen minutes. If she manages to sustain her status as a sultry seductress a while longer, she’d best take some acting lessons before Hollywood chews up her looks and spits her onto the pile of forgotten “hottie” actresses. Either she or her manager should have known that not just any actress could pull off the sexy-vulnerable look Glazer was going for with Lily. And after prancing around Hollywood with a sex-object-and-proud-of-it chip on her shoulder, Glazer should have known Fox was the wrong choice.

Glazer’s sole bit of inspired casting is Murray, a few shades less sadistic (and less amusing) than his similar gangster role in Mad Dog and Glory. But Murray’s few scenes can’t make up for Rourke’s sleepy performance or Fox’s desperate, ineffectual attempts to look at once sexy and victimized. The film’s cheap production values worsen matters, as Glazer shoots Lily’s scenes of flight with some truly horrible green screen effects. The CGI used to render the wings themselves is just as pitiful, with the white of the wing simply disappearing into Fox’s skin, as though feathers and skin became one—a look that doesn’t help the audience suspend our already crumbling disbelief. Passion Play never ceases to be pretentious and absurd, and almost demands to be seen to be believed.