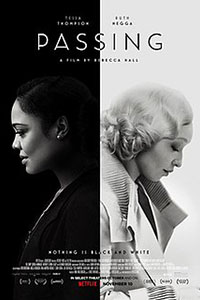 “What I’d really like to do is direct” is a Hollywood cliché. With Passing, Rebecca Hall transitions from actor to director, a move that usually warrants skepticism. When actors finally get their shot at the director’s chair, the result often seems preoccupied with performances, although that’s natural enough. Some actors have turned into great directors; others have stepped behind the camera only to realize their talents belong in front of it. Hall, always a welcomed presence onscreen, demonstrates that her generally undervalued talent goes far deeper than most viewers might have realized. Passing is among the most impressive directorial debuts in recent memory, by an actor or otherwise. Based on Nella Larsen’s 1929 novel of the same name, the film follows two light-skinned Black women living in New York City. One identifies as Black, the other “passes” for white, and both struggle to feel part of either community. The film’s resonant themes do more than supply a pertinent discussion about race, identity, and social constructs; they show a filmmaker so inspired by material that she makes it come alive.

Tessa Thompson and Ruth Negga give exceptional performances as Irene and Clare—friends who grew up together in Harlem, though their lives have taken different paths in the decade or more since they last met. Irene still lives in Harlem and has married a doctor, Brian (André Holland). They have two boys, one a preadolescent and the other a teen. Irene spends much of her time volunteering for the Negro League, a charitable organization devoted to African American causes, and rubs elbows with its white benefactor (Bill Camp). With Irene busy, she relies on their maid, Zu (Ashley Ware Jenkins), to handle most of the housework. One day, in a chance encounter at a hotel café, Irene notices a familiar-looking blonde woman—Clare, who now passes for white on a full-time basis. Clare lives in comfort, married to a wealthy white banker named John (Alexander Skarsgård), an unabashed bigot. But she yearns to live again among Black people and regain a sense of her identity, which represents a grave risk if John were ever to discover her secret.

Seeing how Clare has chosen to live her life—John calls Clare a racial slur as a pet name, and she laughs indulgently—Irene resolves not to rekindle the friendship. However, Clare soon inserts herself into Irene’s life, and she becomes the talk of every party and even steals the spotlight in Irene’s family. Negga is magnetic, as always, drawing the more inward Thompson’s gaze in long shots from her perspective as she ponders Clare’s intentions. But Clare’s presence also causes mounting pressure. Irene starts to think about race, which causes her to avoid confronting her insecurities—in a somewhat overly symbolic scene where Irene looks at the literal cracks in her home. When Brian starts to talk openly to their teen boy about lynchings and harassment in the street—an everyday reality in America in the 1920s—she tells him, “You’re not to talk about the race problem.” Though she remains unwilling to address the subject, he’s ready to leave the country for good to escape America’s culture of discrimination. As someone who could pass for white but chooses not to, Irene doesn’t feel sure about who she is or who she’s supposed to be. 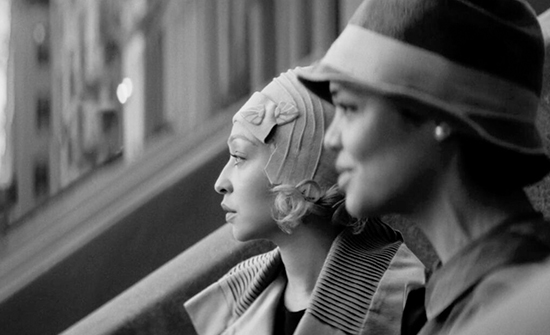 Despite the marketing materials that overstate the film’s themes with sharp divisions between black and white on the poster, Hall shoots the film in a silvery grayscale. Except for passages that fade to milky white or black, the monochrome images created by cinematographer Eduard Grau seldom employ high contrasts. The characters exist in an uncertain space between perceived poles, and the visual tones reflect their gray world. Hall and Grau use delicate light and sharp clarity to render the setting and characters in tangible relief, framing them in the Academy ratio of 1.33:1, suggesting they subsist in a box of race built around them by social construction. It’s such a sophisticated and gorgeous application of form—aided by stunning production design by Nora Mendia and costumes by Marci Rodgers—that the film’s intricate and intentional compositions prove almost distractingly beautiful. The effect recalls films such as Cold War (2018) or Roma (2018), where the aesthetic pristineness threatens to undermine their emotional impact.

Of course, Passing is a film driven by questions of racial identity, which is a heated and politicized topic in American culture today. And it’s a personal topic for Hall, whose grandfather was a Black man passing for white. Her opera singer mother, Maria Ewing, did not openly identify as Black and never talked about race much with her daughter until recent years. More than a decade ago, when Hall first read Larsen’s book, something clicked, and conversations about race in her family started happening more regularly. The material asks the same questions that Hall asked herself about how labels derive from social constructs. If you don’t fit nicely into these categories of white or Black, who are you? It’s that uncertainty and insecurity that drove Hall to write the screenplay and make the film, and it comes through in every thoughtfully considered shot and every meticulous detail. There’s genuine care here, and the viewer can sense that throughout.

There are other questions too, and they speak to the intentional ambiguity in Passing. What should we make of the way Irene’s eyes linger affectionately on Clare’s back? Do those whispers between Brian and Clare suggest an affair? Does Clare, who freely admits that she will walk over anyone to get what she wants, intend to secure herself a comfortable place in the Black community with Brian? Hall refuses to answer these questions. Although the film  investigates race, Irene has a line that goes, “We’re all of us just passing for something or other.” Such dialogue gets to the universal truth that human beings often create their own realities through social learning—we learn our language, behaviors, and identities from our surroundings and experiences. Sometimes we do this without knowing it, sometimes others force their labels upon us, and sometimes we actively adopt a role. When we aspire to become something or want to fit in, we might act the part. In a form of passing, we “fake it till we make it” or we “dress for the job we want.” Before long, we have disguised ourselves so well that we can no longer remember anything else. Passing doesn’t condemn this behavior; it simply acknowledges the complex ways people build their identities.