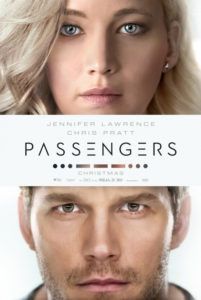 Imagine the first half of Room or 10 Cloverfield Lane told from the kidnapper’s point of view, except set in space, and you will get some idea about the trajectory of Passengers. Director Morten Tyldum (The Imitation Game) tells a science-fiction story that functions as a troubling male fantasy, ignoring its questionable moral grounds in a way only a thoughtless Hollywood production would attempt. As elaborate special FX attempt to distract us from the disturbing reality of what happens in the film, viewers who put even the smallest thought into the narrative’s implications will wonder how so many talented people never paused to consider the weirdness of their material. Starring Chris Pratt and Jennifer Lawrence, two of the most attractive actors working today, Passengers seems content to ask, How awesome would it be if you had Jennifer Lawrence alone in space with nowhere to go? If that isn’t creepy enough, the film is frustratingly self-unaware, while Tyldum’s unsubtle creative choices avoid tackling the larger issues within the material.

Aboard the helix-shaped Avalon, 5,000 passengers and 255 crew members rest in suspended animation on a 120-year journey from Earth to Homestead II, a colony planet operated by corporate interests. Just 30 years into the trip, a meteor strike causes a single cryo-sleep pod to malfunction, waking Jim Preston (Chris Pratt) about 90 years too early. With no way to re-engage his stasis, he’s doomed to a life of solitude and will likely never see the ship’s destination. Jim roams around the intergalactic cruise liner, his only company an android bartender, Arthur (Michael Sheen), who’s suspiciously similar to Lloyd from The Shining. A mechanic, Jim attempts to craft a solution or wake the ship’s crew, all of whom sleep behind an impenetrable security door, but he proves unsuccessful. Instead, he grows a beard (a fake one that looks laughably bad on Pratt) and begins to obsess about an attractive sleeping passenger, Aurora Lane (Jennifer Lawrence).

Jim stares at the sleeping Aurora and, over several months, reads the ship’s considerable passenger profile on her, convincing himself he’s in love. He soon resolves to wake her by causing her pod to malfunction. The choice comes after much deliberation, but it nonetheless means she, too, will be doomed aboard the Avalon, now with only Jim and Arthur to speak to. Meanwhile, Jim keeps his selfish scheme hidden from Aurora and pretends as though her pod malfunctioned. After an initial period of panic, Aurora settles into a routine with Jim. She’s also a writer and resolves to document her experiences. Over time, the two start a romance, which has a creepy undertone for the audience given Jim’s scheme, though Passengers never considers the scheme creepy. At least, not adequately enough. There’s a point where Aurora becomes aware of Jim’s actions, but the story doesn’t deal with the implications in a satisfying way.

In fact, the film seems to justify Jim waking Aurora because A) Jim’s loneliness was nearly suicidal; B) Pratt is very likable, so his crime is much easier to shrug off; and C) the finale contains an all-too-convenient disaster scenario through which the main characters bond. Many of the plot’s incongruities seem to be resolved by the fact that Pratt and Lawrence make an attractive couple. If Pratt looked like Steve Buscemi, Passengers would be another film entirely. Indeed, if you replaced Thomas Newman’s heavy-handed score with moodier, spookier music, Passengers would easily become a film about space madness and a disturbing kidnapper. Alas, Tyldum caters to the lowest common denominator. Consider an early scene where Jim nearly ejects himself in the air lock. As he shakily reaches toward a big red button, the score pounds with suspense. Given that we’re only twenty minutes into the picture, we know he’s not going to press the button. Tyldum could have made this moment a penetrating scene of silence that considers Jim’s solitude and deteriorated mental state; instead, it’s just loud and obvious.

Tyldum is an unsubtle director. He received a lot of backlash about The Imitation Game for unabashedly following an Oscar bait formula. With Passengers, his approach is once again very typical, like a sci-fi epic parodied in a better film (see Fellini’s 8 ½). Screenwriter John Spaihts writes characters who speak in clichés and banalities, as though he’s penning the script for a trailer. “Can’t slogans be true?” Jim defends, after Aurora criticizes his cornball way of speaking in a seemingly self-aware moment for the film. But Spaihts also uses voiceover in the form of Aurora’s writing to show the passage of time in several montages. Though she’s praised as a virtuoso writer, Aurora’s prose sounds like “Dear Diary” stuff. “They say time heals all wounds,” she says in one of her voiceovers. Does that adage apply to kidnappers who have obsessed over you, doomed you, and left you with no choice but to love them?

Problematic though the story may be, some viewers will forgive Jim’s crimes because Pratt and Lawrence look good onscreen. Passengers is superficial that way, affording its stars several opportunities to appear in bathing suits or share bedroom scenes, which helps distract from its unsettling elements. Co-star Laurence Fishburne breaks up the monotony of attractive white people, albeit briefly; Andy Garcia and his thick beard also show up in a blink-and-you’ll-miss-it cameo, which suggests he had a more substantial role that was almost entirely cut. Perhaps the film’s finest qualities remain formal, from Rodrigo Prieto’s crisp lensing to the slick-looking production design by Guy Hendrix Dyas. Passengers has a lot going for it, but the entire treatment feels mishandled, misguided, and a missed opportunity.