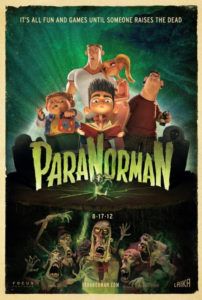 In the hands of Tim Burton and Henry Selick, stop-motion animation, with its tangible dimensions, hand-crafted appeal, and ability to bring monstrous creations to cartoonish life, has become an artistic breeding ground for morbid tales suitable for the whole family. Selick’s The Nightmare Before Christmas and Coraline have encased a cult following delighted by the melancholic and comically gruesome. From Laika, the studio behind the latter title, comes ParaNorman, another playful spookhouse yarn that’s bound to inspire devoted followers in older youngsters and teenagers, but especially adults who savor the filmmakers’ winking humor and use of horror and teen movie tropes. With relevant themes about the dangers of bullying, the film by co-directors Sam Fell (Flushed Away) and first-timer Chris Butler (storyboarder on Corpse Bride) is beautifully made, gleefully gloomy, and vital in its social observations.

It’s very The Breakfast Club meets The Frighteners in this dark account of a young boy, Norman (voice of Kodi Smit-McPhee), who sees dead people floating as fluorescent green wraiths. His dead grandma (Elaine Stritch), for example, sits on the couch knitting as Norman gazes into the television at a zombie flick. In his small Massachusetts town of Blithe Hollow, where an ancient witch’s curse has become a touristy attention-grabber adorning the shops and restaurants down Main Street, Norman remains an outcast in spite of his ability to corroborate the town’s morbid fascination-turned-marketing gimmick. Everyone knows what Norman—his porcupine hairdo standing high like his finger found its way into an electrical socket—thinks he sees, and so he’s been labeled a “freak” by a local bully (Christopher Mintz-Plasse). Even his close-minded father (Jeff Garlin) and sympathetic mother (Leslie Mann) refuse to believe it, if only because they don’t want him to end up like his hermit uncle, Prenderghast (John Goodman), who also claims to see spirits.

As Blithe Hollow prepares to celebrate the 300-year anniversary of their town witch’s execution, Norman begins to see strange things that no one else can, but not the usual ethereal floaters. This is stranger than usual: Walls burn away and he flashes back to puritan days where witch trial fanatics hunt him in the night and put him up for judgment, and he sees this all from the perspective of their local witch specter (Jodelle Ferland). Prenderghast arrives and warns Norman that only someone with their ability can save the town from the witch’s curse, which promises to bring the dead back to life in revenge. And so Norman heads out into the dark woods alone to stop the curse, but he inadvertently unleashes a horde of living corpses from the bodies of the colonists who originally executed the resident witch. To Norman’s rescue are his cell phone obsessed sister (Anna Kendrick), his chubby friend Neil (Tucker Albrizzi), and Neil’s dim-witted jock brother (Casey Affleck)—hapless all as how to stop the witch from haunting their little town.

Witch curses, flesh-eating zombies, and floating wraiths hardly seem like kid’s stuff, and ParaNorman takes the material to surprising extremes, while the film always manages to be good-natured. There’s no blood or violence that will raise eyebrows, but the horror and supernatural atmosphere may be too much for easily frightened kiddies. On the plus side, as the story unfolds there’s a positive message about the dangers of bullying; both Norman and the witch are and were singled out for being different, and the theme cements nicely by the finish. Whereas so many children’s movies tack on some lame commentary as an excuse to purvey the movie’s bright colors and overpriced 3-D effects, this one has a strong narrative pull that will leave audiences feeling like their time wasn’t wasted on animated fluff.

Speaking of 3-D, ParaNorman belongs on a short list of productions that are worth the surcharge. Stop-motion animation remains the ideal format for the device, and the only type of film for which I gladly lay down a few extra dollars. Every moment pops and recedes the way it should, because what the filmmakers have done here is made a living sculpture. Clever angles and crisp lensing by Tristan Oliver enhance the effect further, as does his successful use of a dizzying dolly zoom. Production designer Nelson Lowry (Fantastic Mr. Fox) lends a careful attention to detail with his angular shapes and autumnal color design. Everywhere there are dead leaves and fingerlike branches on bare trees, and yet the prominent earth tones, pumpkin oranges, schlock pinks, and ectoplasmic greens set this film apart to avoid any close comparisons with Tim Burton fare.

With plenty of hilarious gags, horror movie references, and a general air of being engineered for anyone not in the mainstream, ParaNorman is bound to become a cult favorite. It’s already the best animated film of 2012, with extrasensory thrills that unexpectedly give way to an emotional message against intolerance. If Quentin Tarantino and Robert Rodriguez sat down to recreate what they did on Grindhouse in PG-rated stop-motion animation form, they might have ended up with something like this. Indeed, the film has that same knowing sense of intentional cheese (with the corny electronic score to prove it), combined with a sly wit, and some fun-loving scares that will make revisiting it a must. There’s a particular audience for whom this material will just click and work on every level, while others simply won’t get it. For those in the former category, ParaNorman is something special.