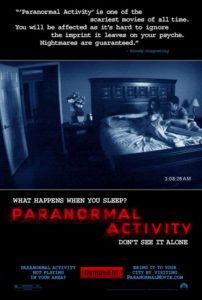 With no opening or closing credits,Paranormal Activity goes to great lengths to make you believe that what happens onscreen is all real. It involves a young couple terrorized by a restless spirit, and their efforts to capture these occurrences on video. Shot with a handheld camera in the vein of Cloverfield and Quarantine, by definition this “found footage” horror film cannot end well. They never do. After all, it’s not as though whoever was shooting said footage wrapped it up nicely after the climax of their own narrative. No, the camera always goes out abruptly in the last moment, leaving the viewer with a sense of emptiness.

And yet, the ingenious promotional department pushing this film’s release has employed an intense campaign to assure everyone knows about it and sees it, even if they leave underwhelmed. They filmed audience reactions from early screenings in night vision, so the movie trailers have green viewers jolting in their seats. The viral campaign is even better. Though distributed in very limited release initially, their website features a “Demand It” option with which visitors can input the name of their city and request that it play in their area. The fact that audiences can’t see it yet seems to drive their interest even more, allowing the few showings around the country to sell out. “Demand It” votes recently exceeded the 1 million mark and secured its wide release. Trouble is, all of this fervor snowballs and eventually generates hype that’s impossible to live up to.

The film begins a bit like Ghost Hunters, that SyFy Channel program where nothing happens. Our two central characters, Katie Featherston and Micah Sloat, hear some weird noises, so they buy a high-end digital camera and decide to document their experiences. The footage is shaky, except for at night when the camera rests on a tripod they’ve set up in their bedroom. Katie, a student, admits that she’s been haunted all her life by something, a ghost or what-have-you. It followed her from her childhood home, which incidentally burned to the ground, to her current home with Micah. It’s always been just a feeling or abstract presence. Micah, a day trader and one-note male, remains skeptical. Katie tells Micah to put the camera away, but he won’t. He’s threatened and frustrated that he can’t gain control of the situation.

At night, they record subtle sounds and film lights flickering on and off, which peak Micah’s interest. He thinks it’s just “bizarre,” while his girlfriend quivers in terror. The film shows us “Night #1” or “Night #12” in sequence, and gives us a digital counter so we can follow what time the spirit likes to play. They talk to a psychic (Mark Friedrichs) about their troubles, and he tells them that they’re not hearing a ghost, but a demon, and according to what Katie has said about her history, it specifically wants to terrorize or be near her. Recording it or trying to contact it will simply anger the demon and make the happenings more intense. The psychic says he’ll be of no help, but that they should call a demonologist. And wouldn’t you know it, the local demonologist is away. Anyway, Micah wants to handle it himself, not talk to more experts. When he does, no matter how scared she is, Katie can’t talk him out of doing something stupid, like using a Ouija board.

An exercise in minimalism, the scares come from the oldest haunted house guidebook the filmmakers could find, although they’re strangely effective because they’re presented as real. Sounds make us jump in our seats. Slight movements of their bedroom door make us squeeze our partner’s hand. The scares don’t stop there. It gets loud and frightening, and about half-way through, we remember back to the beginning, how the filmmakers thanked the San Diego Police Department, and the Featherston and Sloat families for their cooperation. In other words, don’t be surprised if the movie doesn’t end well.

Despite the lack of credits, the film was made for a reported $15,000 budget and shot in 7 days by rookie filmmaker Oren Peli. There wasn’t a script as much as there was a story outline and plenty of improvisation by the actors. Originally screened at the Slamdance Film Festival in 2007, where its ending was reportedly different, the film has passed through the hands of plenty of studio execs, which purportedly include Steven Spielberg. The Hollywood influence opted to change the finale for the theatrical release. The already slapdash last moment now comes with a hokey piece of contrived, obvious computer-graphic imagery; with it, the filmmakers have squandered any hope of its audience walking away and believing it was real.

Paranormal Activity is a mild piece of horror entertainment that, released in the weeks preceding Halloween, will provide the right audience with a few shocks. Like a rollercoaster, the film goes up and down, from nighttime scares to the daytime discussions of them. But like a rollercoaster, it’s a temporary buzz that fades as soon as the ride is over. In the moment, you may lose yourself in the fine construction of chills. Afterward, you’ll be thinking of how temporary it was, and how silly the ending proved to be. In the same way that The Blair Witch Project got the moviegoing world excited for fifteen minutes and then ultimately disappointed us, this will too. And for those looking for a narrative to accompany their ghostly scares, look no further than this year’s Drag Me to Hell. Same idea there, but satisfying.