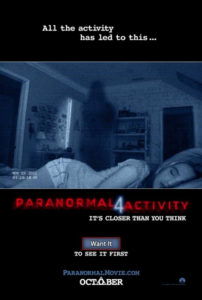 Like the Saw franchise before it, the Paranormal Activity movies have outstayed their welcome.  One could argue this sentiment was true as early as Paranormal Activity 2, given the disposable quality of the first one. But in hindsight, the original 2009 film by writer-director Oren Peli is subtly inspired when compared to the dwindling quality of what came after it. Peli’s film was a clever haunted house scenario rooted in simple shocks, eerie shadows, and creepy sounds, all negated in the finale by a goofy CGI face. Audiences were so involved because they weren’t expecting to be shocked. Their imagination did all the work, while the filmmakers played the role of master manipulators (at least for the 80-some minute runtime).

Going into a sequel, we’re now versed in the franchise’s brand of trickery, and so by nature, the scares are less effective because we’re expecting a certain formula. And sadly, the filmmakers aren’t doing their part to keep pace with their audience’s realigned expectations. Now we’re to Paranormal Activity 4, and the fourth entry in any franchise is usually the point where it moves away from being a respectable trilogy to becoming a tired series audiences attend just for something to do, or in this case, something to sustain our autumnal Halloween mood. Released annually, the Saw franchise continued through eight movies because bored moviegoers kept attending, until the filmmakers gave up—and not because that franchise became unprofitable, mind you; because they just ran out of ideas. The folks behind Paranormal Activity 4 might consider doing the same.

The trailers promise “All the activity has led to this.” Meaning what? This third sequel will be the mother of all Paranormal Activity movies? Meaning we’ll finally learn what the coven of witches and the central demon is up to? Don’t count on it. In fact, of all the movies in this series, this fourth entry provides audiences with the least amount of new information. What we’ve learned from the series thus far: As children, Katie and Kristi were tormented by a demon, nicknamed Toby, but later they were seemingly adopted into a witch’s coven and became pals with Toby. As adults, Katie and Kristi have forgotten their childhood supernatural experiences, until Toby shows up again. Katie becomes possessed by the demon, kills Kristi’s family, steals Kristi’s baby boy named Hunter, and then she disappears. She and Hunter are never heard from until 2011, when Paranormal Activity 4 opens. But now I’m getting ahead of myself.

Enter the upper-middle class home of Doug (Stephen Dunham) and Holly (Alexondra Lee), a middle-aged married couple content never to speak to one another. Their teenage daughter, Alex (Kathryn Newton), records everything via cell phone video and digital cameras on the family’s assorted laptops. When Wyatt (Aiden Lovekamp), the family’s adopted 6-year-old boy, befriends Robbie (Brady Allen), a menacing neighbor boy the same age, Alex and her totally dudical boyfriend Ben (Matt Shively) begin to notice strange occurrences—especially after Robbie’s unseen mother requires an unexplained hospital stay and Robbie bunks with Wyatt for a few days. Loud bangs and noises in the house sound like someone is moving furniture, and they’re heard during Alex and Ben’s frequent online video chats. Intrigued, Ben resolves to rig the family’s laptops to constantly record, which as we’ve learned in the previous movies only agitated the situation.

Returning directors Henry Joost and Ariel Schulman (Catfish) and screenwriter Christopher Landon recycle more ideas than they invent. These characters make the same mistakes as the victims in the earlier films. Moreover, the directors seem to have watched every classic horror movie in preparation for this production. Alex’s body levitates like something out of The Exorcist; Wyatt pedals around on a Big Wheel in scenes straight from The Shining; Robbie may as well be named Damien, after The Omen’s bad seed; the finale recalls something akin to the panicky reveal in Rosemary’s Baby. Along the way, there are more false scares than genuine shocks, and once again the filmmakers employ corny CGI that destroys any hope to convince audiences that what we’re seeing is real. Then again, after the second one, Paramount stopped preceding the film’s events by thanking the families and police departments involved in the aftermath of what we’re about to see.

The sole innovation worthy of mention is the use of an Xbox Kinect, which, when filmed in night vision, displays thousands of tiny sensor lights to pick up a gamer’s movement. These night images from the family’s living room have an almost science-fiction look, eerie and filled with odd distortions. Beyond this dismissible aside, Paranormal Activity 4 plays out in ways so predictably dumb and abrupt that, once the credits begin to roll, audiences will be grumbling about having wasted their time and money. But that will hardly matter to Paramount after what will inevitably be a profitable opening weekend. Until Peli, serving as producer here, or someone at the studio resolves to follow Saw’s path and admit they’ve run out of excuses to keep going  (aside from money, that is), you can bet moviegoers will be seeing Paranormal Activity 5 next fall. And given how this one ended, I fear we’re all in for another dose of formulaic Boo! moments, characters we couldn’t care less about, and an empty experience overall.