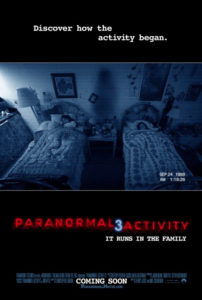 Instead of going my usual route and harping about typically unrewarding endings in “found footage” movies—which always leave the viewer with an abrupt finish and the notion that the unfortunate protagonists died horrible deaths—I’m going to try something different for Paranormal Activity 3 (even though that same argument could certainly be made here). The latest sequel in the popular, now-annual Halloweentime franchise answers questions established in the first two films, concerning what happened to the targeted victims of those entries when they were children to unleash or attract a demon of sorts onto their family. My problem with these films is not merely the subgenre’s limitations in terms of providing a satisfactory conclusion, but the filmmakers’ inability to sketch out characters who grow or have any kind of emotional depth.

Recycling ideas from the first Paranormal Activity, directors Henry Joost and Ariel Schulman, makers of the pseudo-doc Catfish, follow another guy who refuses to put down the camcorder, even though his persistence might kill him. There’s another skeptical female, his girlfriend, worried about the situation yet seemingly more annoyed by his constant recording. But this time there are her two little girls in the mix, Katie (who later grows up to be the terrorized victim from the first film) and Kristi (the victim in the first sequel). Aside from a brief prologue that allows the previous Katie and Kristi (Katie Featherstone and Sprague Grayden) some screentime, the entire movie is set in 1988, and so technically this “part 3” is a prequel. Plenty of period details provide a few nostalgic laughs, like a debate about Back to the Future’s title and the massive size of a cordless phone, but Joost and Schulman never fully embrace the period.

Again, a family begins to hear creepy sounds in the night and the resident videophile attempts to capture their origin on tape. As they pay more attention to the phenomena, the incidents accelerate, become more aggressive, and finally turn violent. Because of the period, boyfriend Dennis (Christopher Nicholas Smith) must switch out VHS tapes every six hours, making a complete overnight recording impossible—a notion never exploited by writer Christopher B. Landon. Something very interesting could have happened in the gaps of those recordings at night when the tape ran out. However, the filmmakers do employ one novel idea: Dennis mounts a camera on an oscillating fan base, so the camera moves back and forth across the room, building tension as the audience waits for the camera to slowly reveal what has changed offscreen. More than once, objects appear or disappear as the camera brings them back into the frame (or not), and more than one satisfying jolt is delivered. Joost and Schulman clearly have control of the movie’s mechanics, even if the characterizations are thin.

The characters here are little more than victims predestined to their fate, since we’ve already witnessed what happened to Katie and Kristi. Ostensibly we’re watching a supernatural snuff film. We’re not concerned with the journey or the characters themselves or obstacles they might overcome; we are watching to bear witness to their deaths, to see how the filmmakers might scare us this time. These are not problems with the entire subgenre per se, merely this series of films. Occasionally, but not often, “found footage” movies manage to develop their characters beyond mere caught-on-camera victims. Examples like Diary of the Dead and The Troll Hunter come to mind. But this is rare. We also learn, in the genre’s fragmented way, why these events have occurred. What we do learn expands the franchise’s mythology but spoils the inital, effective mystery. And any true horror fan knows that the more you know, the less scary it is.

The effect is not unlike watching reality television or gawking at the aftermath of an auto accident. Sure, there are effective Boo! shocks and unnerving sights, but there are also silly sights, such as a scene when one of the girls finds herself hair-lifted into the air by bad CGI. But to what end does any of this transpire? With no real emotional connection offered, Paranormal Activity 3 becomes a haunted house-type experience where the participants pay for a ticket to endure a series of scares. Once the experience is over, there’s nothing much to discuss or analyze, aside from how well this or that moment made you leap out of your seat. The experience feels grossly un-cinematic. After it’s over, you’re no richer for having participated—if you can call it participating—no matter how many times you fall prey to its many Gotcha! moments. Ah well, at least this one avoided trying to convince the audience that these tapes were real by thanking the local authorities and families involved.