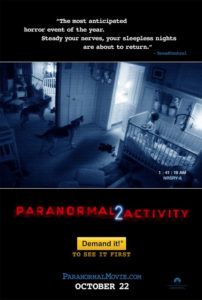 Cashing in on the hype-induced profitability of Paranormal Activity, Paramount Pictures greenlit Paranormal Activity 2 back when the original was still in theaters. Since that movie’s shoestring budget resulted in upwards of $100 million in box office receipts, how could they resist trying to repeat its success? The original’s writer-director Oren Peli opted not to return, leaving the director’s torch to pass through several hands, including Brian De Palma’s, winding up with Tod Williams (The Door in the Floor). Yet, Paramount should have known that audiences would turn on the first movie in the interim, and that its temporary thrills and bound-to-disappoint ending would not age well with audiences. As a result, there’s a “who cares?” attitude surrounding the sequel’s release.

The original benefitted from the same unregulated buzz that made The Blair Witch Project into a runaway hit, later to become a despised disappointment among moviegoers for its unsatisfying conclusion. Presented as “found footage”, Paranormal Activity 2 claims to be actual video shot by the participants. In the opening, Paramount thanks the victim’s families and the local authorities for use of the video. But the quick realization that such statements are bogus proves bothersome. Similar claims were made about Paranormal Activity; having learned their lesson on The Blair Witch Project, few moviegoers out there believed the fib. As movies like The Fourth Kind have learned, in the digital age it’s near impossible to pull off such a publicity stunt. One web search and we know none of the characters ever existed. After the attempt to convince us we’re watching a genuine supernatural snuff film fails, it’s only natural to scrutinize everything onscreen.

“Found footage” movies have a nasty way of losing their appeal the moment they’re over. None so much as Paranormal Activity, which was presented with such plausible verisimilitude—that is, until the very last scene when the filmmakers ruined any prospect for believability with a lousy CGI animated demon face. And so, coming into the sequel, there’s hardly any doubt in the viewer’s mind that what we’re watching is fake. More bad computer effects involve an elevated baby, a possessed pool cleaner, and a dog that meets her demise only after stepping offscreen and returning as an animation.

This time, a whole family contends with an invisible demon causing trouble in their home. It makes subtle appearances in the beginning. Doors slam and strange noises come from downstairs. Then things get louder and more confrontational. One person gets dragged down the stairs. It turns out the family’s mother is the sister of the female victim from the first movie, but it’s also revealed that the events in the sequel actually take place before the original. A digital counter in the bottom righthand corner of the screen tells us what time it is. Not that it matters; we never use the information. Dad remains skeptical that anything supernatural is happening. The teenage daughter provokes the situation through séance. Their knowing Latina nanny seems to be the only one who knows what’s going on, but Dad fires her when she becomes too insistent about her superstitions. He should’ve listened, as the family’s baby seems to be the demon’s target. Luckily the baby has a dog to protect him; not so lucky for the dog.

Ideal sequels add to the mythology of their predecessors, while also expanding the narrative and production limitations of the first. In those terms, this sequel has all the right moves. There are more characters through which there are more scares. And as the story unfolds, we learn more about the characters from the first movie. There are six cameras stationed throughout the house as a security precaution. But the film has a very monotonous look, interchanging between infrequent handheld footage and the mounted cameras. At times, after long periods without a mobile camera, the audience begins to feel like security guards watching video from a haunted house.

Williams does an ample job recreating the candid camera stylization and “found footage” atmosphere, and the scares cause a shock here and there. Visually, the experience is boring and repetitious. Aurally, the lack of a score and long stretches of silence give way to sudden bursts of sound that forces the audience to jolt. But they’re the kind of jolts that have the viewer laughing at themselves afterwards, and also laughing at the movie. Paranormal Activity 2 is a movie people should talk through and laugh at. There’s almost no emotional involvement. It’s no different, and certainly no better than watching TV’s Ghost Adventures or Destination Truth, except here the filmmakers actually give audiences something they want to see. Too bad this hokum isn’t convincing, even for a moment, or it might be a nice Halloweentime shocker.